Behind the sharp drop of 25% in the price of the Ruilong 3000 processor: TSMC's 7Nm capacity has shifted to AMD 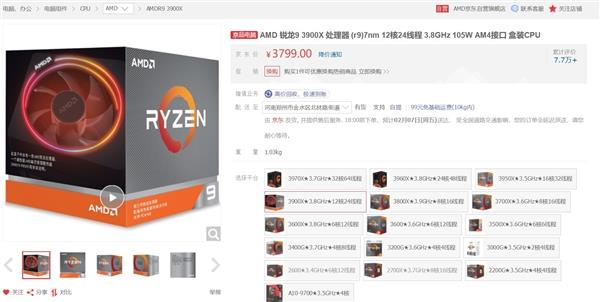 Judging from the performance of the Chinese and American markets, this price cut should be a formal price adjustment half a year after the launch, and the core reason for the price cut is not hard to guess,That's AMD's 7nm Rylon 3000 processor capacity .

At the financial report meeting at the end of January, amd also talked about the capacity of TSMC again. CEO Su Zifeng said that TSMC, the OEM partner, gave amd good support in the first few months of the 7 nm capacity ramp up. In 2020, AMD will have a significant growth in 7 nm.

As apple and Huawei will turn to the 5nm technology for high-end chips this year, AMD's 7Nm production capacity will be guaranteed in 2020. Previously, it was reported that TSMC's 7Nm production capacity will reach 140000 Wafers / month this year, and AMD will be able to take 30000 Wafers / month, accounting for 21%, surpassing apple to become the first customer of TSMC's 7Nm.

In addition, AMD will launch the zen3 processor with 7Nm EUV process in the second half of this year, which is also the exclusive OEM of TSMC. The production capacity problem will not be as tense as last year.