Amd announces the secret of 7Nm zen2 "small chip": reduce the manufacturing cost of 64 cores by 50%

In the zen2 architecture of AMD, amd went further in the original MCM multichip design, and changed to the small chip design of chips, which is simply to separate the CPU core and IO core, using different processes respectively, the former is TSMC 7Nm process, the latter is GF 14 / 12NM process.

So what are the benefits of this design? At the recent ISSCC conference, amd released some data and compared the cost data of 7Nm zen2 in different core configurations. 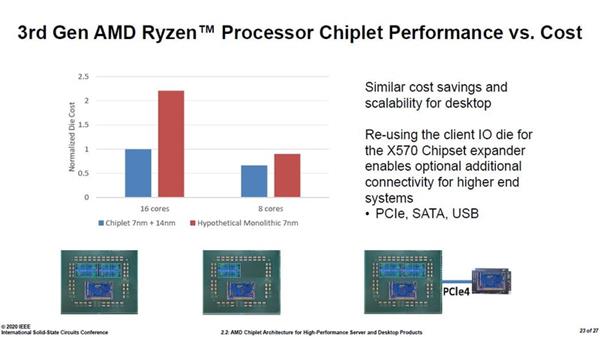 First of all, for the desktop version, if the sharp Dragon 3 with 16 core and 32 threads is taken as the 100% benchmark, the cost of 16 core processor with native core will exceed 2, at least twice the cost. 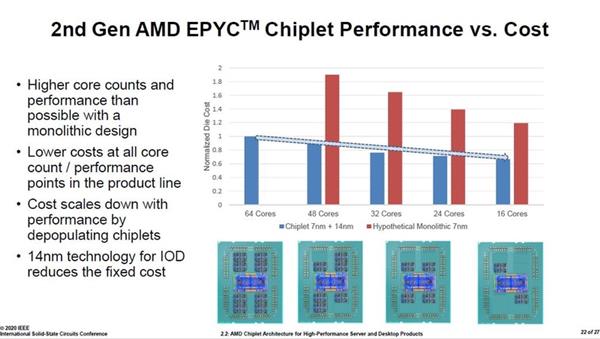 If it is epyc Xiaolong processor, the more the number of cores, the more obvious the cost advantage. If 64 core 7Nm sharp dragon is used as the benchmark, the cost of 48 core is 0.9, while the cost of original 48 core design is at least 1.9, still twice the level.

Of course, as the number of cores decreases, the cost-benefit will also decline. The cost of desktop 8-core is almost the same as that of the original core design,16 cores and above will lead to significant cost reduction。

The reason is also very simple. In the small chip design of AMD, IO core is produced by 14nm process. The cost of this part is relatively fixed and will not increase or decrease with the number of cores. Therefore, the less CPU core, the less cost advantage, and the more core, the more obvious.

Related news
AMD 7nm Zen2 yield has reached 70%: twice the Intel 14nm 28 core
AMD 2020 processor product line exposure: Zen2 APU and Zen 3 Ruilong 4000 come
AMD Su Zifeng:7 nm Zen2 notebook processor will be released early in the year, and 2020 will be the product year.
Amd announces the secret of 7Nm zen2 "small chip": reduce the manufacturing cost of 64 cores by 50%
7Nm zen2 sets the global power of AMD: in addition to the United States, China, India and Canada
The host uses 3.8ghz 8-core zen2 processor AMD to stop developing small core x86 processor
Hot news this week
||||||||
Samsung Galaxy note 20 exposure: S20 ultra with s pen?
TSMC's 5nm process performance is improved by 15% and the performance of AMD Ruilong 5000 processor takes off
The Institute of Psychology of the Chinese Academy of Sciences and Tencent set up a psychological assistance platform to help psychological reconstruction
When Wuhan Optical Valley returns to work: Internet enterprises can apply for resumption of work and production, which shall be approved
Celebrating Hubble's 30-year launch of NASA's "birthday universe" special page
The top scientist returned to China after the U.S. investigation to develop a new rapid detection method for coronavirus
AXON 11 ZTE 5G release: from $168 g/7.9mm 2698
wechat "dark mode" hot eyes? These six new features are the real fragrance!
HuaweiP40 release: with HMS hard-core google, no price increase to grab the global high-end machine market
The most popular news this week
Microsoft is playing a bit big! Several new features of win10
Cdpr community manager praised "ancient swordsman 3" and replied that he liked their game very much
Zhejiang Jiaxing issued 200 million yuan of consumption bonds, of which 150 million yuan was deducted through wechat payment
Sinopec no longer imports more crude oil from Saudi Arabia? Official denial
453 million in two and a half days! Hangzhou Alipay consumer coupons boost consumption strongly
Zoom not only shows the original meaning of technological innovation in Huawei P40 series
The 10th anniversary of NVIDIA Fermi architecture
Huawei Ai Wei: the history of qualitative change caused by quantitative change will reappear in the computing industry
Infected new crown pneumonia to take medicine for life? WHO think China's new crown outbreak of the second outbreak?
They all say they are image flagship. Why is Huawei's P40 series really the only one?