In the days leading up to the 2020 U.S. election, the trump campaign bought some of the most valuable advertising space online, according to a Bloomberg report.Trump's re-election campaign bought YouTube's headlines on election day, November 3, that is, the blank space at the top of the home page of the video website. YouTube headlines usually run all day. The exact duration and financial details of the trump campaign's ad purchases are unclear, but it is estimated that the average daily ad fee for this location could be as high as $1 million. 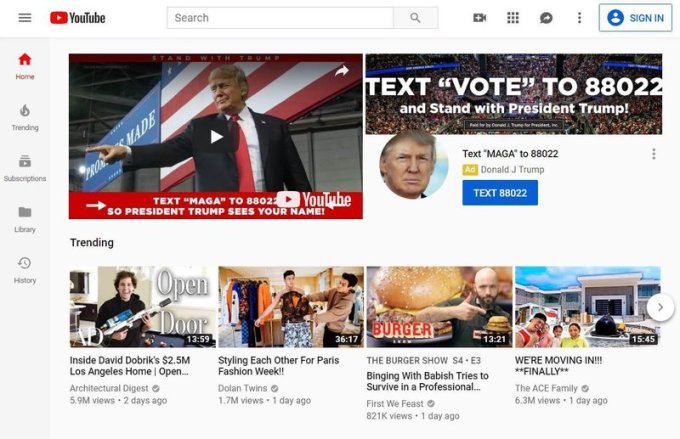 It's not unprecedented for the campaign to buy YouTube headline ads in a similar way. In 2012, the Obama campaign bought the same ad space before Mitt Romney won the Republican nomination. This isn't the first time the Trump campaign has bought a YouTube headline ad space, which it also made last June to deliver its message in the first Democratic debate.

Despite the precedent,2020 is a very different year for the flow of political money to high-tech companies. With the election coming, big tech platforms are still tweaking their political advertising rules. The uncertainty of the situation is a boon for campaign groups eager to put a lot of cash into technology platforms. Facebook is still under scrutiny over its willingness to accept funding for political ads that contain misleading claims, even if it suffers from a cash shortage in the 2020 campaign. Most notably, the controversial candidacy of billionaire Mike Bloomberg, who spent $33 million on Facebook alone over the last 30 days. Despite controversial political ad policies, controversial Facebook offers surprising transparency to the content running on the platform through its powerful political ad library, a tool that revolved around the controversy surrounding the 2016 U.S. election.

Twitter, on the other hand, chose to ban political ads altogether, and is now trying to mark "synthetic or manipulative media" that "misled users ", a practice that could mark the candidate's non-paying content, including a recent debate video tampered with by the bloomberg team. Twitter is addressing its own policy issues in a relatively public way, accepting trial and error rather than setting rules.

Unlike twitter, YouTube will continue to accept political ads, but last year it mysteriously deleted 300 trump campaign ads without revealing what policies they violated. Google also announced that it would limit the positioning of election ads to a few high-level categories (age, gender and zip code), and the trump campaign called for the decision to "clamp down on political speech.". Despite Google's strong micro positioning, the policy around allowing lies in political advertising is far from Facebook's "one size fits all" approach. Google does not allow "misleading statements about the census process" and "false statements that could seriously undermine participation or trust in elections or democratic processes.".

In recent years, many criticisms around political advertising have focused on the practice of micro positioning advertising to specific users, a large number of personal data collected by modern social platforms and an effective technology that can be traced back to the past. The action will take place in 2020. Trump's campaign successfully exploited this phenomenon in 2016.

YouTube declined to confirm the trump campaign's ad purchases with techcrunch, but said it was "common" to buy YouTube headlines during the election. A YouTube spokesman said: "in the past, campaigns, PACS and other political groups have been putting all kinds of ads before election day. All advertisers follow the same process. As long as the ads conform to our policy, they can buy the headlines. "

Related news
Foreign Media: Amazon Prime Day is just a fake version of Ali Shuang11
Reports claim the Trump campaign bought a headline ad space for YouTube on Election Day
Hot news this week
||||||||
Celebrating Hubble's 30-year launch of NASA's "birthday universe" special page
Twitter is a good product, but its shareholders don't have to
865 Jiachi Meizu 17 access: support 30W fast charging
HuaweiP40 release: with HMS hard-core google, no price increase to grab the global high-end machine market
More than 60000 original articles are protected every day, and Tencent's "zhixinlian" helps the author of penguin to protect his rights
Awesome China scholar! The latest paper on the cover of Science: how the new coronavirus invades cells
Lenovo into Luo Yonghao's first collaborators? Insiders: not settled in contact
Xiaomi 10 / 10 Pro mobile phone goes out to sea: Show crooked nuts what the earth looks like under 100 million pixels
Is telecommuting inefficient? The father of Linux has five experiences
The most popular news this week
One plus eight system weighs less than 200g, which is cheaper than Samsung S20
Rising number of new diagnoses of Samsung's key chip factories in South Korea, the United States and Brazil
How Microsoft polished the new version of Edge scrolling feature (Figure)
HuaweiP40 there are still American chips, there is a long way to go
P40 first! Huawei mobile phone new function exposure: mobile phone can be used as microphone
2020 iPhone se will launch three colors: red, white and black
Performance up to three times better than NVIDIA T4! Baidu Kunlun AI chip further demonstrates the application of "killer mace"
This year's sales will plummet by 240 million! Global mobile phone market in the winter of 10 years
Tesla's share price jumped 17% after it announced delivery of 88000 vehicles in the first quarter
The number of novel coronavirus pneumonia cases is over 1 million. The US has confirmed more than 235 thousand cases.