Just a few days ago, Google launched its new Google Maps design to celebrate the 15th anniversary of the app's launch, foreign media BGR reported. The redesign is designed to provide a more concise interface, and the most important changes involve the bottom menu. Google removed the previous item and replaced it with three tags to better serve users. But as it turns out, Google's user interface revamp doesn't seem good enough, and the company is making a more important change to the bottom menu.

The name of the commute tab has been changed to a simpler go, which should better explain its purpose. This tab should be used to navigate whether you are commuting or going to a new location. According to 9to5 Google, the new "go" tag combines the "commuter" tag with all other traffic related shortcuts. Take a look at the redesigned UI: 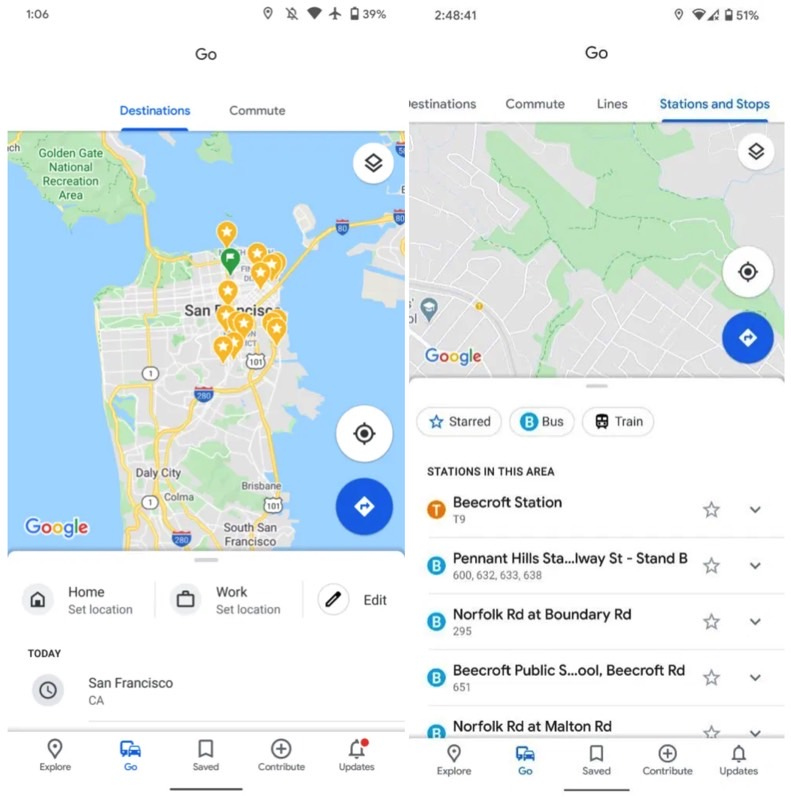 Of course, it's not just the name of the tab that changes. Icons have also been redesigned to make menus more than just commuters. Home and office icons have been replaced by icons showing cars and railways. Within go, the default view is destination, which includes shortcuts to home, company, and other shortcuts. Now a "commuter" label is also displayed at the top. Some Google Maps users also found other menu items, including line and stations and stop.

The difference between the two screenshots above shows that Google is still trying a new menu. In fact, some users may not have new UI changes, but it may soon be rolled out to allIPhoneAnd Android users. To ensure that it is available, users need to update to the latest version of maps 10.35.2.

Related news
Artists mislead Google maps with smart phones
Google to further update redesigned Google Maps
Hot news this week
||||||||
Celebrating Hubble's 30-year launch of NASA's "birthday universe" special page
Twitter is a good product, but its shareholders don't have to
865 Jiachi Meizu 17 access: support 30W fast charging
HuaweiP40 release: with HMS hard-core google, no price increase to grab the global high-end machine market
More than 60000 original articles are protected every day, and Tencent's "zhixinlian" helps the author of penguin to protect his rights
Awesome China scholar! The latest paper on the cover of Science: how the new coronavirus invades cells
Lenovo into Luo Yonghao's first collaborators? Insiders: not settled in contact
Xiaomi 10 / 10 Pro mobile phone goes out to sea: Show crooked nuts what the earth looks like under 100 million pixels
Is telecommuting inefficient? The father of Linux has five experiences
The most popular news this week
Only 1399 yuan! The new generation of online class artifact Lenovo M10 plus is on sale
Xiaomi has a variety of ice refreshing sunscreen clothing: UPF600 one against 15 pieces!
Amazon makes great efforts to enter the field of video games to launch original games and cloud game platforms
Alipay, a programmer, saved 50 million yuan for two sheep: raising and eating.
One plus eight system weighs less than 200g, which is cheaper than Samsung S20
Rising number of new diagnoses of Samsung's key chip factories in South Korea, the United States and Brazil
How Microsoft polished the new version of Edge scrolling feature (Figure)
HuaweiP40 there are still American chips, there is a long way to go
P40 first! Huawei mobile phone new function exposure: mobile phone can be used as microphone
2020 iPhone se will launch three colors: red, white and black