According to foreign media CNET, NASA's insight lander is a picture of perseverance. The lander deployed a hot probe called "mole" in early 2019, whose mission is to go deep into Mars to get the planet's temperature. But the task did not go well.NASA is now trying a new way to move a stuck mole. 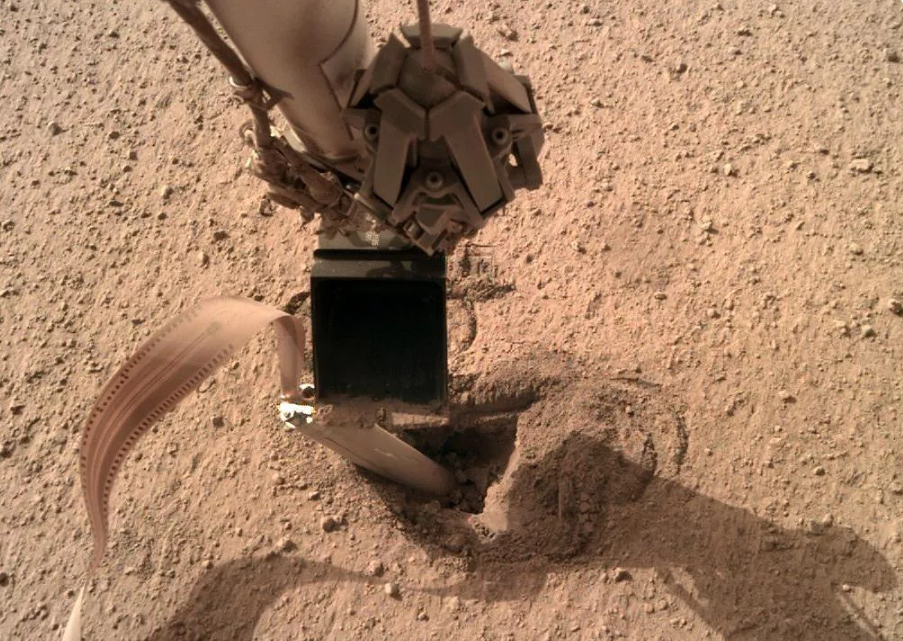 Thermal probes have a history of bouncing back from Martian soil, rather than hammering down as expected. The unexpected soil composition of this part of Mars seems to be causing trouble. "The dust particles are not as loose and as sticky as expected," NASA said in a press release Friday

Through a GIF image posted on Twitter, the Insight team showed the landing gear robotic arm trying to touch the top position of the "mole," calling it" trying to try what we never thought we would do." NASA has been avoiding pushing to protect the tether that connects the mole to the lander. "With a few options, the team has decided to try to help the mole dig by pressing carefully on its back cover while trying to avoid tethers," the agency said

It may take weeks to test this new operation. NASA is also considering using the shovel on the lander to fill the soil around the hot probe, but this movement will depend on the effect of the thrust method.

Related news
NASA Mars helicopter has been equipped with a camera. The red planet will be shot from high altitude.
NASA's Insight has begun to take action to rescue the Mole probe
NASA "Insight" began to take action to rescue the "Mole" detector
NASA insight lander will push the stuck Martian mole
NASA is trying to solve its Martian mole problem in the most unusual way
Hot news this week
||||||||
Celebrating Hubble's 30-year launch of NASA's "birthday universe" special page
Twitter is a good product, but its shareholders don't have to
865 Jiachi Meizu 17 access: support 30W fast charging
HuaweiP40 release: with HMS hard-core google, no price increase to grab the global high-end machine market
More than 60000 original articles are protected every day, and Tencent's "zhixinlian" helps the author of penguin to protect his rights
Awesome China scholar! The latest paper on the cover of Science: how the new coronavirus invades cells
Lenovo into Luo Yonghao's first collaborators? Insiders: not settled in contact
Xiaomi 10 / 10 Pro mobile phone goes out to sea: Show crooked nuts what the earth looks like under 100 million pixels
Is telecommuting inefficient? The father of Linux has five experiences
The most popular news this week
Huawei Xu Zhijun: new IP is a pure technical subject
What's wrong with zoom, which is disabled by NASA and SpaceX and warned by the FBI?
Cisco's "zero trust" security architecture guards the present and future
White House urged CDC to change its prevention manual to encourage Americans to wear masks (photo)
Google plans to close its Q & A app, neighbor resource, in May
Only 1399 yuan! The new generation of online class artifact Lenovo M10 plus is on sale
Xiaomi has a variety of ice refreshing sunscreen clothing: UPF600 one against 15 pieces!
Amazon makes great efforts to enter the field of video games to launch original games and cloud game platforms
Alipay, a programmer, saved 50 million yuan for two sheep: raising and eating.
One plus eight system weighs less than 200g, which is cheaper than Samsung S20