The South China Seafood Market is not the birthplace of the new crown virus, according to new research America's "innocent "?

The outbreak of novel coronavirus pneumonia has been more than two months ago. Scholars have never stopped the source of the virus. On February 20, the Xishuangbanna Tropical Botanical Garden of the Chinese Academy of Sciences released research results information through its official website,The new coronavirus in Wuhan's South China Seafood Market has been introduced from elsewhere, with the corollary that the market is not the birthplace of the virus. Interpersonal communication may have begun in december or even late november 2019. 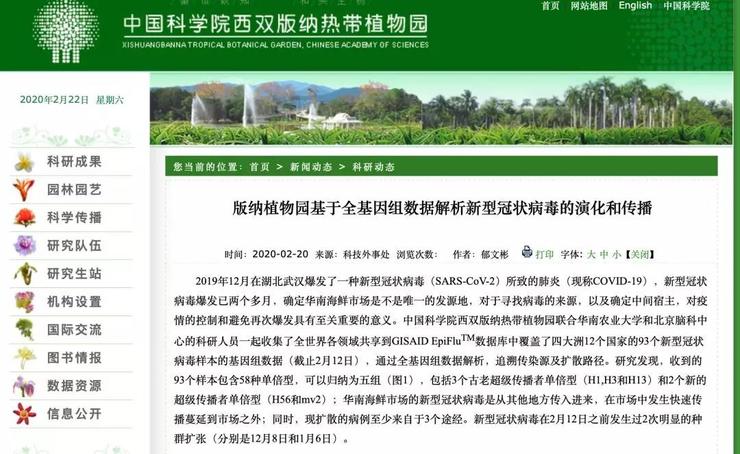 The researchers collected virus data shared by the world to the gisaid epiflutm database as of February 12, including 93 new coronavirus samples from 12 countries on four continents. Among them, the sampling deadline for samples from Wuhan, Hubei Province is January 5, and the latest sampling date for global samples is February 3.

Through genome-wide data analysis, the researchers found that the 93 samples collected contain 58 haplotypes (haplotypes, i.e. several closely linked genes that determine the same trait), which are centered on the super disseminator haplotypes. The researchers classified them into five groups, which together constitute a virus evolution network. The five centers are respectively three old super communicator haplotypes H1, H3 and H13, and two new super communicator haplotypes h56 and MV2. Among them, H1 haplotypes are the most, and its derivative haplotypes are the most. Haplotypes H13 and h38 may be ancient / ancestral haplotypes among all haplotypes. They may be associated with bat coronavirus ratg13 through an intermediate haplotype. Since there are no samples of the first infected and early infected in early December, the original ancient / ancestral haplotypes may not have been found. 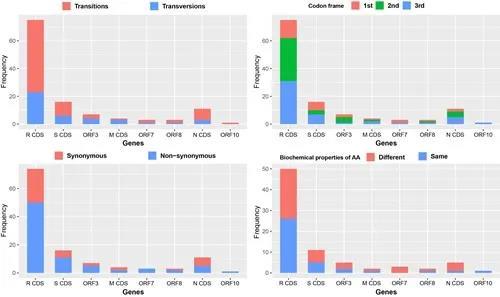 The haplotypes of patients related to the South China seafood market are H1 and its derived haplotypes H2 and h8-h12, which indicates that the market has spread infection in the short term. In addition, a Wuhan sample of haplotype H3 has nothing to do with the seafood market in South China. The researchers believe that H1 and its derived haplotypes may originate from H3, there is no original source of new coronavirus in the seafood market in South China, and the new coronavirus may be imported from other places. Previous studies have also shown that the first identified infected patients have no connection with the market, so the researchers believe that it may be the infected people who transmit the virus to the workers or sellers on the market, and then quickly circulate in the market. The crowded market promotes the further spread of the virus to the buyers, and it will spread in early December 2019.

The study, published in the lancet on january 24th, also confirmed that tracking the first 41 confirmed cases found that 13 of the first cases reported on december 1st had no history of contact with the seafood market. In other words, the virus has penetrated into the lives of Wuhan residents before entering the seafood market, but the South China seafood market is still one of the "intermediaries" of the spread of the virus.

In addition, novel coronavirus genome data were used to predict the population expansion before January. The time was December 8th. The results suggest that virus may have been transmitted in early December and even in late November, and then accelerated the interpersonal communication in Southern China seafood market. The population expansion time before February is estimated to be January 6, which may be related to new year's Day holiday. It should be noted that on this day, the National Center for Disease Control and prevention issued a level 2 emergency response. The early warning at that time played a role of warning, and public activities and travel were reduced.

If the warnings were to be taken more seriously, there would be fewer cases of contagion to the country and the world in late January. The researchers further confirmed that nine other cases of infection in nine other provinces and 11 other countries were imported directly or indirectly from Wuhan.

additionally, to be able to subdivide the source, the researchers divided 58 haplotypes into five groups, using criteria of three central (ancient supercarrier) haplotypes (h1, h3 and h13) and two new supercarrier haplotypes (h56 and mv2). To identify the Guangdong virus may have three sources, Chongqing and Taiwan virus has two sources. Among them, a family of people in Shenzhen, Guangdong Province, spread through human descendants in the early days. Australia, France, Japan and the United States, with more samples, have at least two sources of infection, especially in the United States.

It is worth noting that h56, a super carrier haplotype, is a source of infection for patients in Australia, France, the United States and Taiwan. Patients from other countries have few samples and most of them come from a single source. Apart from their tourism import or infection in Wuhan, some of them may be infected in Guangdong, Singapore and other places.

Is the United States likely to be the source of the virus?

Netizens then began to guess: is it the U. S. military behind the scenes? But the question is, even if America is behind it, why does it do so?

According to netizens, when the united states came to china to participate in the military games, the united states was experiencing a flu outbreak, the last group left november 15th at the latest, the end of december wuhan found infected new coronavirus patients, it is no coincidence. ....。 But that doesn't seem to be the reason why we should doubt America, after all, no one can jump to conclusions until the truth comes out. 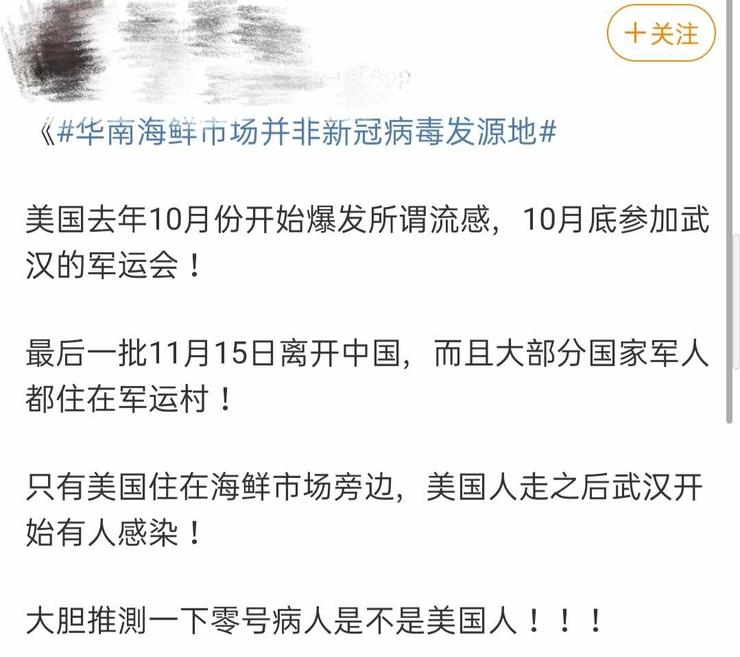 Curiously, Lei Feng's editors also looked at the CDC's official website and found that in its latest report there was a lot about "many patients who weren't suffering from the flu," but the type of flu hasn't been determined, and the CDC hasn't pointed out that the type of flu that hasn't been identified is the new type of coronavirus, or that some of the people who died of the flu in the United States died from the new corona pneumonia. Of course, the US CDC has not said that "flu in the United States may have masked the spread of the new corona virus in the United States."

Obviously, the news reported by Japanese media has the suspicion of "exaggeration".