According to the official wechat of Xiaomi mobile phone, the stable version of Xiaomi 10 series MIUI is being upgraded (v11.0.7.0. Qjacnxm), and its performance is further enhanced. It is reported that after the upgrade, millet 10 Pro broke through 600 thousand points of random running at room temperature.

So is there any way to improve the running score? Xiaomi china marketing general manager yao liang really made a series of attempts on this.

First of all, in the normal temperature environment, you can easily run a score, that is to say, breaking the 600000 mark. The specific running score is 605783 points, which is much higher than that announced at the press conference. 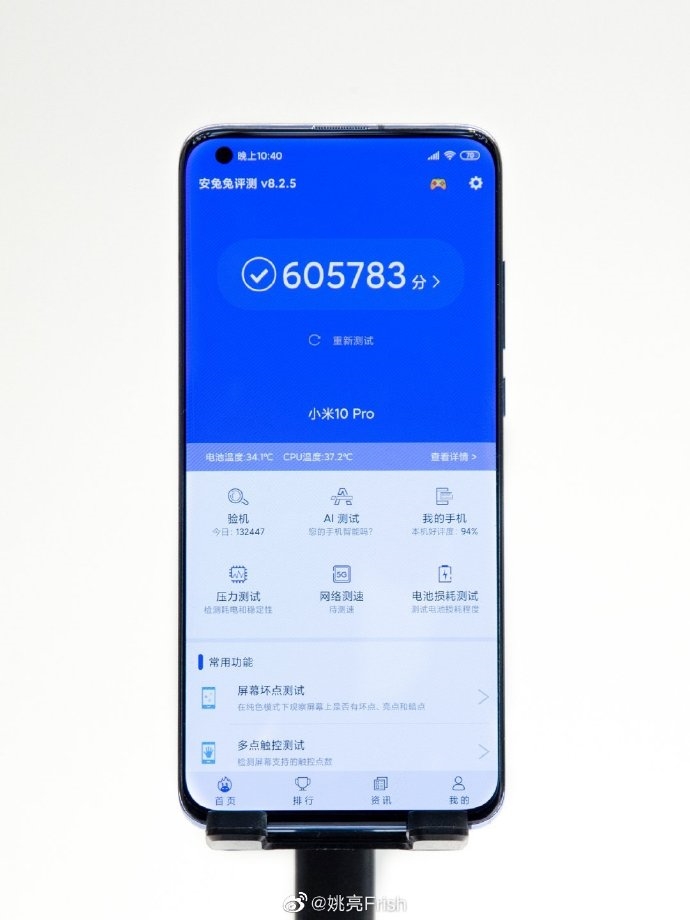 Next up is the external-mounted Xiaomi ice-cold heat-dissipation clip for running points, the biggest feature of the accessory is 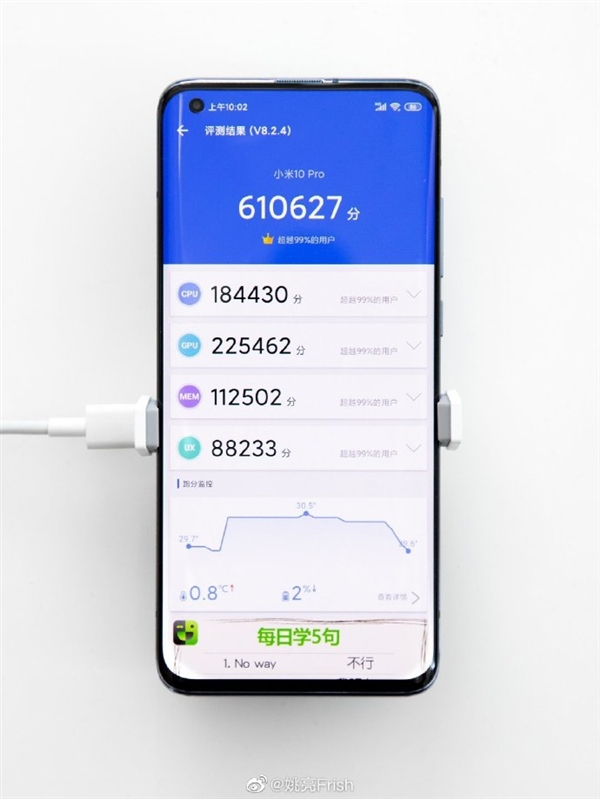 Then?Xiaomi 10 Pro was placed in the air-cooled three door refrigerator (210L) of Mijia for running score, indicating that the running score was 61008。 You might ask, why not

However, from the above comparison, it can be seen that when Xiaomi 10 Pro is equipped with an external ice cooling clip, the score improvement effect is basically flat or even slightly better than that in the refrigerator environment, which can also prove that the ice cooling back clip does have a certain effect in daily use. 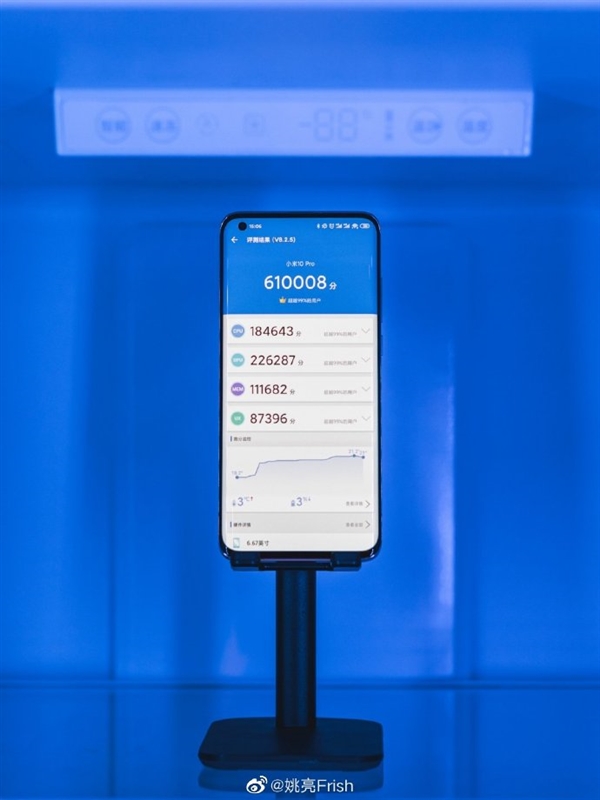 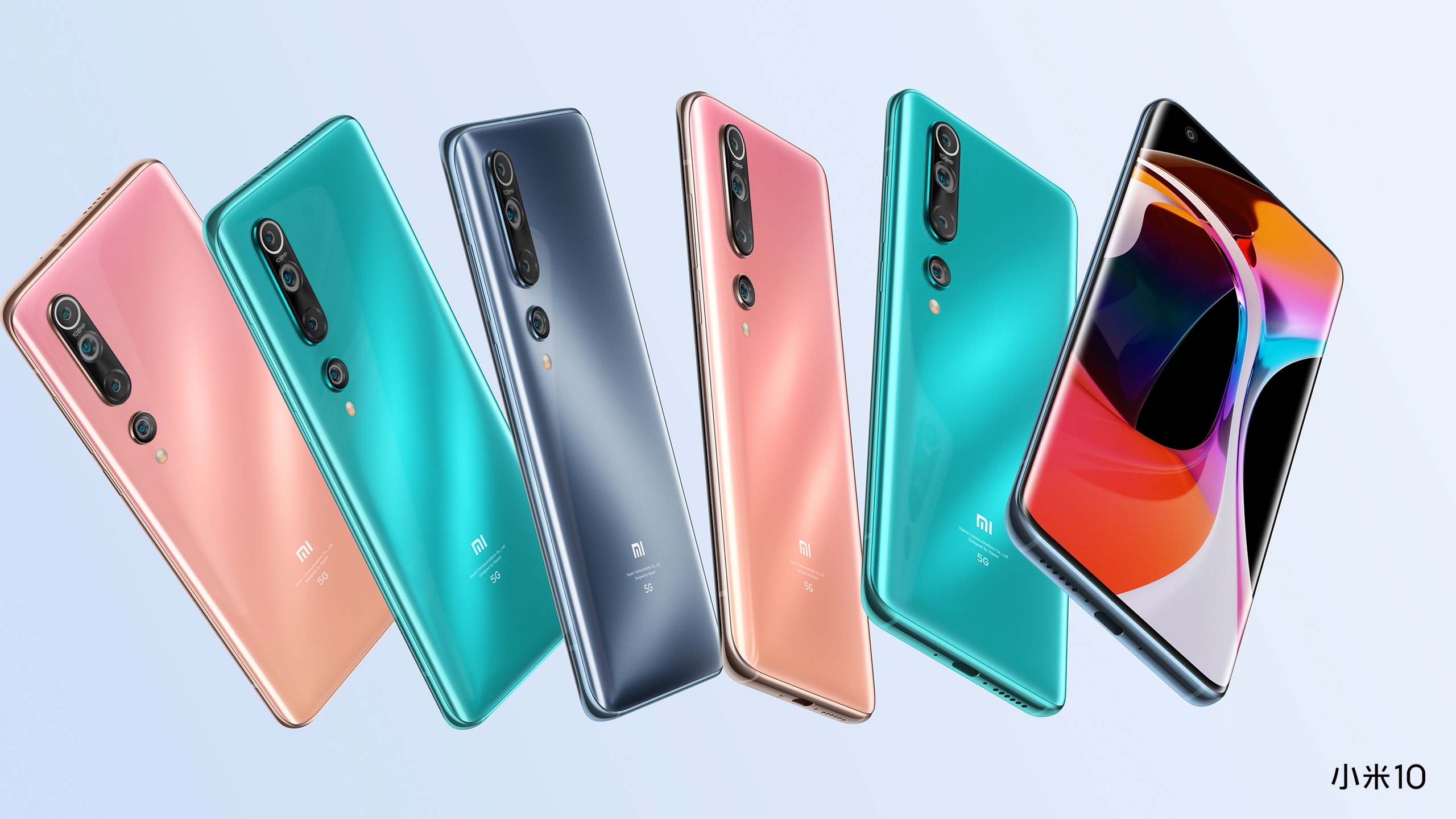 Related news
From 3999 yuan, they were robbed: millet 10 and millet 10 Pro were sold out as soon as they were ordered
What's the difference between millet 10 and millet 10 pro? Which one should I buy? Read a text
From 4999 yuan! Xiaomi 10 Pro sold for the first time today, ranking first in DxO photo scoring
Users are reassured to buy Xiaomi 10 Pro Lu Weibing: The flagship of February/March totally exceeded it almost no
Xiaomi 10 Pro external ice cooling clip surpasses 610000 refrigerator points
Xiaomi 10/10 Pro clamshell cover arrival:69 yuan multi-color optional
It's stronger than Xiaomi's ice cooling back clip. The black shark Pro version comes: the iPhone can also be used
P40 Pro will be super millet, 10 Pro will dominate DxO? Lei Jun: Surpassing each other and growing up together
Lei Jun: Xiaomi 10 Pro has dominated the list for a month and a half
Hot news this week
||||||||
Samsung Galaxy note 20 exposure: S20 ultra with s pen?
TSMC's 5nm process performance is improved by 15% and the performance of AMD Ruilong 5000 processor takes off
The dark mode of IOS wechat online: is it "advice" to apple?
Tencent urgently launched the international version of Tencent conference voov meeting to compete with Microsoft and other companies
The Institute of Psychology of the Chinese Academy of Sciences and Tencent set up a psychological assistance platform to help psychological reconstruction
When Wuhan Optical Valley returns to work: Internet enterprises can apply for resumption of work and production, which shall be approved
After 00, the performer Ouyang Nana entered Taobao: the annual salary of millions is P8
Affected by the outbreak Microsoft Edge browser stabilized version suspended updates
Is it too troublesome for wechat QQ to forward documents? 14K gadgets are ready in a flash
The most popular news this week
New retail pressure behind Xiaomi's layoff
Reuters: 5g iPhone 12 mass production delayed
Samsung Galaxy fold 2 exposure: higher screen share, more extreme
ZTE AXON 11 hand :168 g/7.9mm 2698 yuan pull down 5 G threshold
Firefox still retains a lot of code from Netscape
VW CEO says there is no revenue loss of 2 billion per week outside the Chinese market
Google realizes more efficient NLP model pre training with Electra
HuaweiP40 release: with HMS hard-core google, no price increase to grab the global high-end machine market
China Radio and television 700MHz proposal officially becomes 5g international standard
Galaxy M01 Wi-Fi certification: running Android 10