Among the terminal risks of enterprises, Trojan software, backdoor and infectious virus are the three major threats faced by enterprises. Among them, the risk Trojan software accounts for the highest proportion of virus attacks. Such virus attackers often obtain a large number of audiences by bundling the downloader and getting the priority display through the competitive ranking of search engine, with a large number of infections, accounting for 44%. Backdoor remote control trojan is followed by 21% of them. Because of its high concealment, receiving remote instructions to carry out information stealing, screenshots, file uploading and other operations, it has caused great harm to information sensitive industries such as financial science and technology. 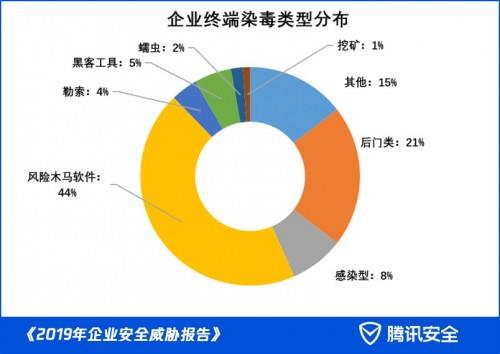 Among all virus types, mining Trojans are still the main type of Trojans implanted after the enterprise server is captured. In 2019, mining Trojans for Linux platform began to be popular. For example, in September 2019, wannamine, a large-scale mining Botnet, launched an attack against Linux system. The attacker used SSH weak password to blast successfully and then planted the mining Trojan horse, which spread horizontally through the intranet through SSH weak password. Although extortion virus does not account for a high proportion in the event of virus infection, the behaviors such as encrypting data, locking system, extorting more expensive ransom for the value of enterprise data, etc. cause serious losses and great damage to the enterprise, so the enterprise still needs to focus on prevention. 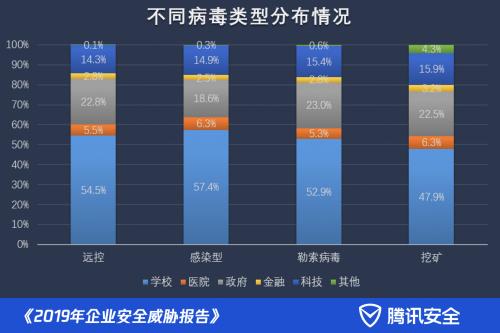 The proportion of high-risk vulnerabilities in enterprise terminals is nearly 80%,Malicious mailspreadtool

According to the report, in 2019, vulnerability utilization and port blasting are still important means to capture terminal equipment, especially for attacks against enterprise servers, which attack servers in the public network environment through vulnerability utilization or blasting, and then horizontal penetration of the internal network has become the most commonly used means.

The weak defense deployment of enterprises is an important reason for the success of virus attacks. According to data from Tencent Security Threat Intelligence Center, as of the end of December 2019, 79% of enterprise terminals still have at least one high-risk vulnerability that has not been fixed. At the same time, a large number of enterprise assets still open high-risk ports. In addition to 22, 3389 and other high-risk ports, there are also a large proportion of e-mail services, database services and other ports exposed on the public network, bringing opportunities to the network black production. According to the report, in 2019, about 40% of enterprises had terminal Trojan infection every week.

Remote code execution (RCE), SQL injection, XSS attack and webshell are the most common types of attacks against servers. At the same time, in order to maximize the benefit of its own malicious behavior, intranet communication and persistent resident become the direction of network black production. In the horizontal transmission of the intranet, vulnerability utilization, weak password explosion attack and file sharing become the main means. As for the persistence of virus, it is easy and not easy to be checked and killed by the way of adding shell to confuse, adding fertilizer to fight and staying at the start position of registry or the start folder, which is favored by the black industry; the way of writing itself into the task plan to realize the residence is more hidden and flexible, especially Bailey's skill of remote download is often used in the task plan.

In addition, malicious mail has become a dissemination tool for black production to launch targeted attacks, such as harpoon mail will carefully collect the information of the target object, and then combine with the target object information, make the corresponding subject of mail and content, and defraud the target to run malicious attachments. Tencent's Advanced Security Threat Detection System (Tencent Royalty) has captured a number of similar cases, with attackers carrying elaborately constructed

According to the report, extortion virus and mining Trojan continue to spread in 2019, high-risk loopholes and information leakage incidents occur frequently, and the security situation can not be ignored. With the continuous upgrading of security confrontation, network attacks will be further intensified, especially with the development of cloud computing and the popularity of 5g, more and more enterprises will transfer their business to the cloud. The increase of attack surface will make the environment faced by enterprises more complex and the security situation more severe. Therefore, Tencent security experts remind enterprises to pay more attention to network attacks, improve their ability of discovery and active response, and strive to build a stronger information security defense line. 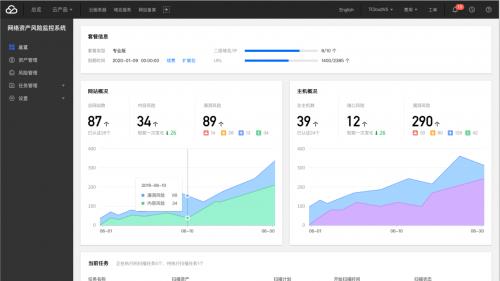 Related news
Red Hat Enterprise Linux 8 was officially released and redesigned for the hybrid cloud Era
Red Hat Enterprise Linux 6 and CentOS 6 updates
Hot news this week
||||||||
Celebrating Hubble's 30-year launch of NASA's "birthday universe" special page
Twitter is a good product, but its shareholders don't have to
865 Jiachi Meizu 17 access: support 30W fast charging
HuaweiP40 release: with HMS hard-core google, no price increase to grab the global high-end machine market
More than 60000 original articles are protected every day, and Tencent's "zhixinlian" helps the author of penguin to protect his rights
Awesome China scholar! The latest paper on the cover of Science: how the new coronavirus invades cells
Lenovo into Luo Yonghao's first collaborators? Insiders: not settled in contact
Xiaomi 10 / 10 Pro mobile phone goes out to sea: Show crooked nuts what the earth looks like under 100 million pixels
Is telecommuting inefficient? The father of Linux has five experiences
The most popular news this week
One plus eight system weighs less than 200g, which is cheaper than Samsung S20
Rising number of new diagnoses of Samsung's key chip factories in South Korea, the United States and Brazil
How Microsoft polished the new version of Edge scrolling feature (Figure)
HuaweiP40 there are still American chips, there is a long way to go
P40 first! Huawei mobile phone new function exposure: mobile phone can be used as microphone
2020 iPhone se will launch three colors: red, white and black
Performance up to three times better than NVIDIA T4! Baidu Kunlun AI chip further demonstrates the application of "killer mace"
This year's sales will plummet by 240 million! Global mobile phone market in the winter of 10 years
Tesla's share price jumped 17% after it announced delivery of 88000 vehicles in the first quarter
The number of novel coronavirus pneumonia cases is over 1 million. The US has confirmed more than 235 thousand cases.