This article is from WeChat Public Number

After several public-opinion crises in recent years, Lenovo was once accused of making profits at home and subsidizing losses at low prices abroad, People's Daily even commented

However, lenovo's recent earnings report was bright, with third-quarter results for the 19/20 fiscal year showing ten consecutive quarters of growth, not only returning to first place in the world in laptop computing, but also performing better in software services, smart transformation and overseas mobile sales. Lenovo's old tree appears to have opened up new branches.

Looking back on Lenovo's development process, we can find that Lenovo has very similar characteristics with IBM, a century old shop. But in the process of dealing with challenges, IBM's decisive decision-making style with clear strategic objectives is quite different from Lenovo.

After comparing the two, we can perceive the advantages and disadvantages of Lenovo.

01Lenovo and IBM without consumer gene

In 2019, lenovo was a big deal, starting with the retirement of liu chuanzhi, a spiritual totem, and then moving to xiaomi as vice president at the end of the year.

In the mobile business, lenovo is stumbling along the way. Back in 2002 lenovo entered the mobile industry, a year before the Huawei, and now it is hard to see lenovo in the mainstream field of mobile, and the global positioning of the later acquisition of the motorola series has failed to make a big difference.

Critics believe that this is due to Lenovo's long-term focus on the government and enterprises, the lack of consumer thinking.

Lenovo's business model has formed the inertia that Lenovo focuses on the needs of key customers. This business model is characterized by stable cooperation, small changes in customer demand and high profitability.

Even on Lenovo's core business PC, there is no effective communication and emotional connection with consumers, and most of the accusations against Lenovo on the network are focused on product configuration, after-sales and other issues.

And any brand will have a core group of users who can be free to promote the recommended grass powder, but also become the network to collect black spots, manufacturers whether or not

IBM was similar to Lenovo before the 1990s.

The early IBM business was primarily aimed at the sale of computers to major customers such as aviation, the military and the government. In 1975, IBM's first innovative model was the 5100

At this time, Apple's MAC, HP, Dell and Japan's small PC manufacturers all put pressure on IBM. In 1992, when IBM made a huge loss, Dell recorded a turnover of 2 billion dollars.

After entering the 1990s, the capital market and the industry generally believed that IBM was on the verge of bankruptcy. In 1992, the amount of IBM's loss reached 4.97 billion US dollars. IBM gradually shifted its business focus from hardware to software and information services, and its service target was still large customers in the category of organization.

The situation makes heroes, but heroes are more likely to lose in the situation.

Fortunately, IBM is not reluctant to part with the PC, which is becoming the buyer's market, but it is quick and powerful.

02From equipment manufacturer to service provider

Looking back on the development history of IBM and Lenovo, they have undergone several major adjustments, the most important of which is the transformation from equipment manufacturers to service providers.

IBM went from producing a punch card maker for recording data to making attendance machines and large computer companies, and then transformed itself into a personal PC manufacturing company, selling its PC business to Lenovo and becoming a consulting, software-focused service provider, which has had a lot of success in quantum computing and AI in recent years.

In 2020, the official establishment period of IBM has reached 109 years. In fact, IBM has been in business for more than 130 years. There are only a few large enterprises in the world that have not dealt with IBM. Huawei's rise is also due to IBM's internal management system, for which Huawei has paid IBM billions of consulting fees.

When Lenovo was the first in China's PC market in 2000, Yang Yuanqing took over the spin-off of Lenovo Group and developed a three-year strategy to transform terminal manufacturers into Internet services, but the transition was unsuccessful, in 2004

Until the acquisition of IBM's computer business, Lenovo firmly took the computer hardware as the core business path, and quickly internationalized, and finally defeated its old rivals HP and Dell in 2014, to become the king of global PC.

After gaining a foothold in the PC world, Lenovo began its second business restructuring

In the latest financial report released by Lenovo, three areas of performance are very eye-catching, which also reflects the transformation effect of Lenovo from a hardware company of trade and industry technology to a service provider.

It has to be said that under the guidance of the Internet of things and smart city, Lenovo's march towards information services and smart manufacturing services is a smart move to develop its strengths and avoid weaknesses.

For example, leapiot, an Internet of things platform built by Lenovo for the industrial field, provides an end-to-end solution from the access of industrial equipment and sensors to industrial application services. 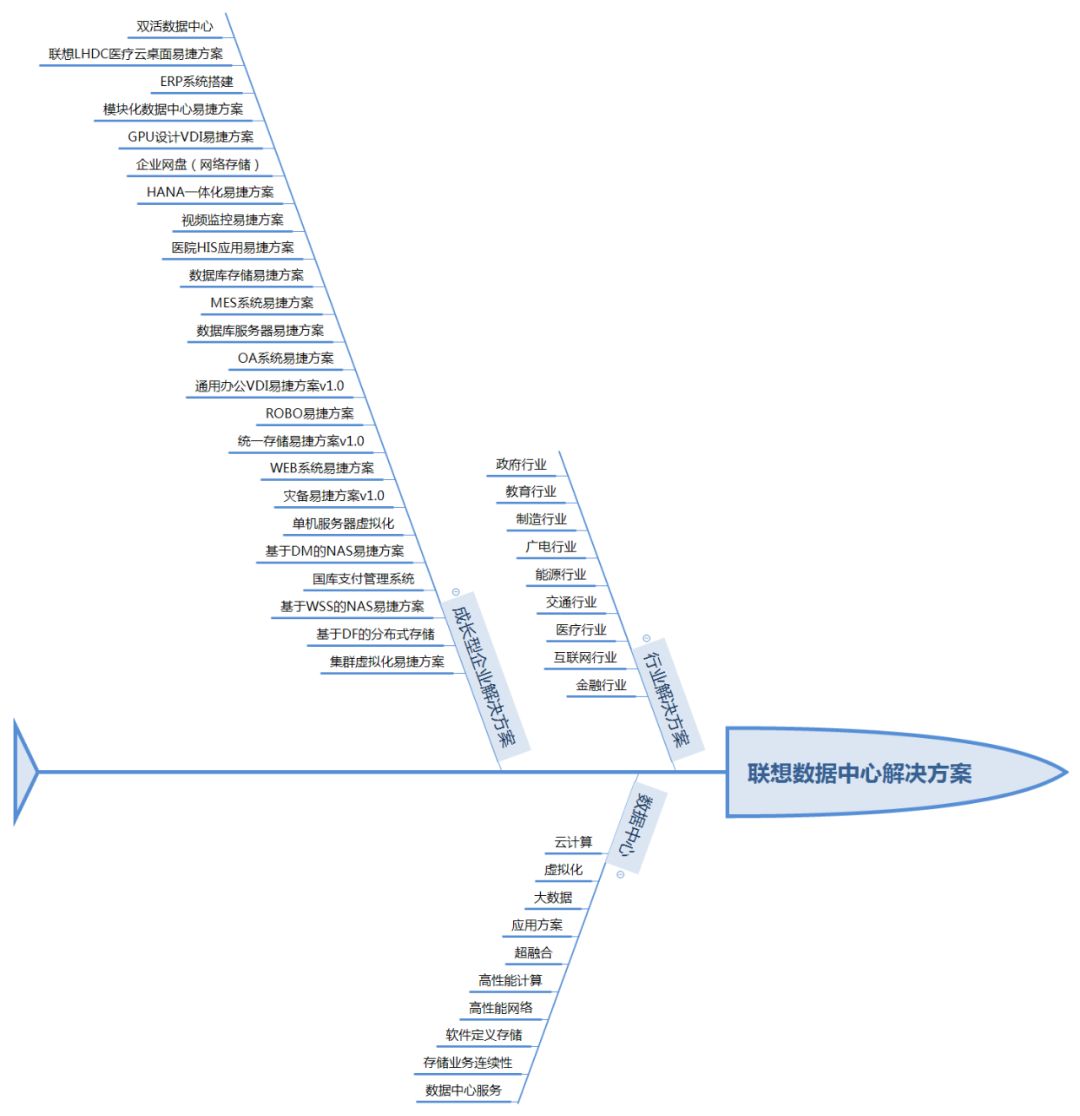 Under the wind of edge computing and the interconnection of everything in the smart city, Lenovo's data center services also have a very wide coverage. As a service provider producing hardware at the same time, Lenovo's service supply in the field of data center obviously helps to make up for the weakness of hardware business.

03Take acquisitions as a magic weapon for expanding the business community

Wu Bofan, the publisher of the 21st Century Business Review, once said

Especially in the face of emerging things, individuals may not be able to respond very quickly, and it is more difficult for large companies to enter the new business rhythm quickly.

In this case, instead of investing resources and recruiting new people to continue to expand the already huge organizational structure, it is better to directly acquire companies with relatively mature related businesses and give the other party a certain degree of independence.

Lenovo and IBM are very similar in their passion for acquisitions.

Lenovo has made many important purchase attempts. In 2005, Lenovo announced to purchase IBM's personal computer business with us $1.25 billion, which is considered as a representative event of the rise of China. Looking forward to the global Lenovo, it moved its headquarters to New York.

In 2007, Lenovo tried to acquire Packard bell, Europe's third largest PC manufacturer, but was blocked by Acer for 31 million euros.

In 2008, Lenovo tried to acquire Brazil's largest PC maker, positivo, and later gave up because of the financial crisis.

In 2011, Lenovo continued to acquire 117-year-old Japanese communications and computers

In this regard, Lenovo has completely faded out of the IT service, network and software fields and focused its business on the personal computer field.

On January 30,2014, Lenovo bought Motorola Mobile for another $2.9 billion from Google, which was generally seen as not a successful acquisition, while Lenovo's cellphone business wasn't boosted by that, and the company's previous tens of thousands of patents had been digested by Google, making it less profitable, was quipped

In general, Lenovo's acquisition is to enter its PC business into the local market and implement its strategy of global hardware enterprises. This acquisition strategy based on trade, industry and technology has the meaning of paying admission tickets.

In contrast, the history of IBM's acquisition, which is also keen on acquisition, is a small and precise local war, aiming at the acquisition of Companies in the industry that coincide with their own strategic direction.

The same is the acquisition behavior. The position and purpose behind it reflect the difference between Lenovo and IBM in their understanding of their own attributes.

Companies in IBM's major acquisition history and business tables were those that had the advantage in software and data at the time. As you can see, every acquisition of IBM is to achieve its own stage of strategic objectives, business capabilities and technology accumulation is IBM's eternal pursuit.

In 2019, in order to expand the business capacity of cloud computing, IBM completed the largest acquisition in the company's history, and acquired red hat company of open-source solutions with us $34 billion. On January 19, 2020, IBM announced that it would acquire softlayer technologies, a private cloud computing infrastructure provider, to enhance its strength in cloud computing.

04Can Lenovo in the future be more like IBM?

Although Lenovo and IBM have many similarities, this kind of commonness has accidental factors, and also has the influence of the differences in the development stages between China and the West.

When IBM is mainly engaged in hardware business, it coincides with the urgent need for high-quality, stable and advanced information equipment from European and American governments, military, aerospace and other organizations. In this case, focusing on large-scale orders of major customers will generate stable revenue.

Lenovo's main partners are domestic governments and enterprises, which are also based on the same historical opportunities, but there are differences in time nodes. IBM is from the 1950s to the 1980s, and Lenovo is in the period of rapid development in China after the 1980s. The heyday of Lenovo's business coincided with IBM's decision to exit the PC track. In emerging market China, national brand Lenovo has more advantages, which is one of the reasons why IBM is willing to sell PC business.

Both IBM and Lenovo have made the transition from hardware manufacturers to information service providers. IBM started to make this transition earlier in the 1990s. Moreover, IBM has long-term deep technology accumulation in the information technology industry, which Lenovo lacks. Lenovo's transformation is the transformation after it occupied a high position in the global PC market after 2010. Both of them are lack of consumer awareness. Lenovo, through its international strategy, has completed the victory of PC track, but is reluctant to lose in the emerging mobile market.

But the fundamental difference between the two is that IBM has a very clear and thorough insight into its positioning and market trends.

From the current business structure of Lenovo, with PC as the core, Lenovo needs to continue to maintain competitiveness. In terms of consumer communication and user demand, it is necessary to change strategies, especially focus on small group effect, or effectively close the distance with consumers, and rekindle people's enthusiasm for Lenovo brand.

For the low domestic market share of the mobile phone business, this report shows that in South America has achieved a second-best market share, while taking advantage of the

In addition,Lenovo tries to increase strategic investment in service supply, benefiting from the construction boom of domestic smart city and smart manufacturing, and has achieved results in terms of financial statements.

In this regard, if Lenovo continues to maintain the habit of small-scale acquisitions or investments in emerging enterprises in the industry, by indirectly enhancing its competitive power in the direction of service supply and maintaining a long-term proportion of R & D, investment and acquisition funds, it is believed that Lenovo can gradually get rid of the label of a hardware company and become a service provider with independent and competitive products.

Lenovo still has many opportunities and much to learn.