Lei Jun: Xiaomi 10 Pro has dominated the list for a month and a half

DxOMark rating has become a well-known benchmark of mobile phone photo taking ability. Xiaomi got the best result in the same place last year with Xiaomi cc9 proXiaomi 10 Pro since February 13 after the release of the first, there are no mobile phones over it。

Lei Jun then issued the Weibo, mentioned that Xiaomi 10 Pro has been a month and a half of the list

But that's true,Xiaomi 10 pro's 124 points are still the highest, only find x2 Pro tied for the first place with 124 points。 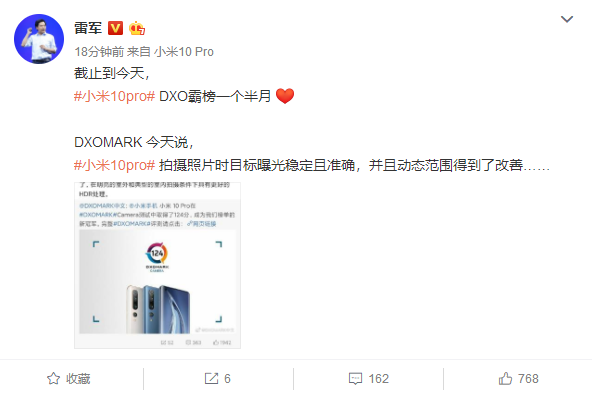 Not only that, Xiaomi 10 Pro audio is also very strong, in the DxOMark audio ranking, Xiaomi 10 Pro also easily get the first, the total score of 76, which play 77, recording 71. 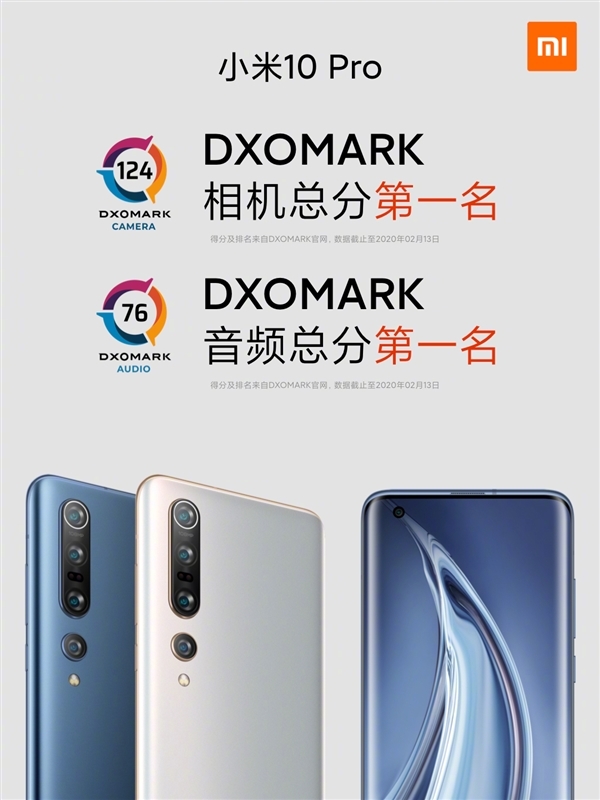 Related news
DxO stabilizes the night scene comparison between Xiaomi cc9 pro and iPhone 11 Pro Max
Flash speed of 10 Pro UFS 3.0 for regular drying millet: accidental confirmation of hole shape in screen
Price and opening time of millet 10 / millet 10 Pro: from 3999 yuan / 4999 yuan
Sure! Xiaomi 10 Pro Full Samsung Screen
P40 Pro will be super millet, 10 Pro will dominate DxO? Lei Jun: Surpassing each other and growing up together
Lei Jun asked Hongmi K30 pro and Xiaomi 10 Pro which netizen replied that it was bright
Xiaomi 10 / Xiaomi 10 Pro is on sale at the same time today: which one should I choose with K30 pro?
Lei Jun: Xiaomi 10 Pro has dominated the list for a month and a half
Xiaomi 10 Pro on the way? Lei Jun hinted Xiaomi 10 series will be oversize cup
Hot news this week
***
Samsung will invest more than $5.7 billion in NAND flash chip production line in hanzeng
A wallpaper makes Android phones crash: it's the color gamut
Xiaomi 618 many new products presale redmi display 1A 23.8 inch price 499 yuan
India mobile Q1 shipments out! Domestic mobile phone dominates Samsung's list
In tmall's selling of sexy products, the sales volume is more than 1 billion yuan. How can I achieve this?
Tesla's autopilot has to step through these pits before it can "roll over"
LETV: the stock will enter the delisting consolidation period from June 5, 2020
The essence of business war is to match resources
Samsung announces the entry-level SOC exynos 850 specification
The most popular news this week
Linux kernel 4.19 and 5.4 life cycle extended to 6 years
Apple plans to launch Apple card installment service: multiple products enjoy 12 interest free periods
Catch up with slack, snipe zoom, Microsoft teams is such a successful counter attack
The second dimension wall is broken: South Korean fans flood into the United States to protest against racial discrimination
How can I fix compatibility errors with Intel octane memory in Windows 10?
Huawei huge cup P40Pro ：3 bright spot
Can mobile SOC's strongest disruptor join AMD and continue yes on the mobile terminal?
What a comprehensive screen! Xiaomi foldable mobile phone patent: mass production in the second half of the year?
Foreign media: TSMC, Samsung and other manufacturers will not fall victim to the US ban
Pizza Hut is being collected! Netizens only spend 3289 yuan to buy 10 high-end Xiaomi