It's time to go out and explore the spring. Jiaxing, Zhejiang Province, as a famous water town in the south of the Yangtze River, has also launched the activity of issuing consumption vouchers in order to encourage everyone to go out and enjoy the beautiful scenery.

On March 29, Jiaxing, Zhejiang Province, announced that in order to further promote consumption and accelerate the overall economic recovery, Jiaxing cloud Shopping Festival will issue 200 million yuan worth of e-consumption coupons to citizens, of which 150 million yuan can be deducted through wechat payment. 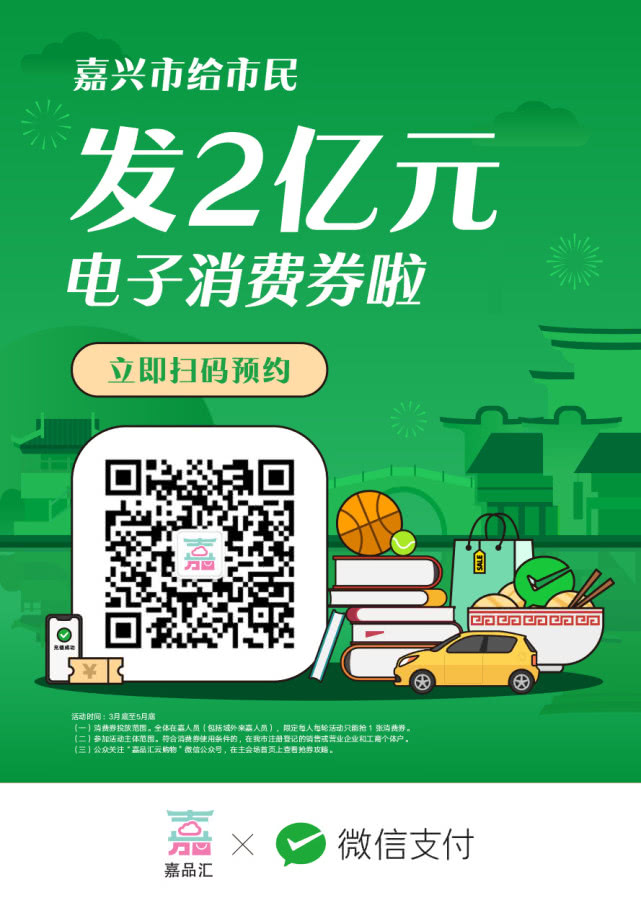 Hundreds of millions of electronic coupons are in place, and the official account of WeChat can be collected.

Starting from March 30, Jiaxing City will issue 200 million e-vouchers to citizens in combination with cloud Shopping Festival, including food, tourism, fitness, bookstore, smart life, automobile and other industries, to encourage citizens to purchase and travel.

It is understood that the application activities will continue from the end of March to the end of April for six rounds. First round of 300,000 consumer coupons. All the people in Jiaxing can be there

Wechat consumption vouchers have blossomed in many parts of the country, giving birth to a new mode of offline shopping consumption

At present, WeChat has 800 million months' active users, and its convenient operation is in line with the users' daily habits, official account and small program. It can carry out the activities of issuing, operating and canceling the coupons, and easily touch the merchants at the grass-roots level. It provides a guarantee for the government to guide residents to spend money.

Through wechat, Jiaxing City in Zhejiang province issues consumption vouchers to citizens, which is of great significance to boost consumption and promote consumption recovery. In the future, wechat will also follow the market trend, actively help local governments to issue policies to expand domestic demand, and jointly promote the overall recovery of life and production in all regions.