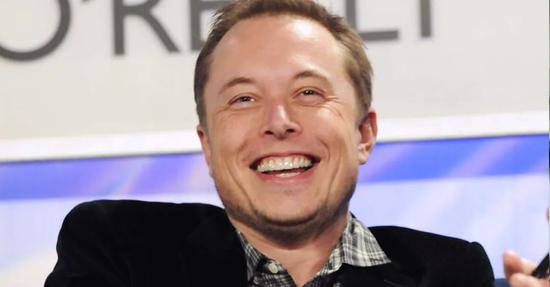 Original title: Musk does what he says! Tesla ventilato

He is a silicon valley iron man and a twitter braggart. He is questioned again and again, but he proves himself with the results. He never lacks respect, but he always wins more respect with his actions.

He, ElonWe built a ventilator with Tesla parts。

In March this year, the epidemic situation in the United States gradually worsened, and musk announced that he would build a ventilator to solve the problem that the supply of medical equipment was in short supply.

But then came the suspicion that Musk was making a show

Unsurprisingly, just today, with more than 360,000 confirmed cases in the United States, Musk is not only doing what he says,

Because before, some people had questioned that Tesla's ventilator was a public relations performance, and blamed Tesla for this move, which would squeeze the parts supply of professional ventilator manufacturers.

But now, speaking of the results, Tesla's engineers say that from the beginning, they planned to use Tesla's car parts to make respirators.

On the one hand, it does not consume the material supply of the medical industry.

In the design drawing, the orange marking part is Tesla auto parts.

Among them, there are the central control screen and computer system of model 3, as well as the parts of model s automobile suspension system. 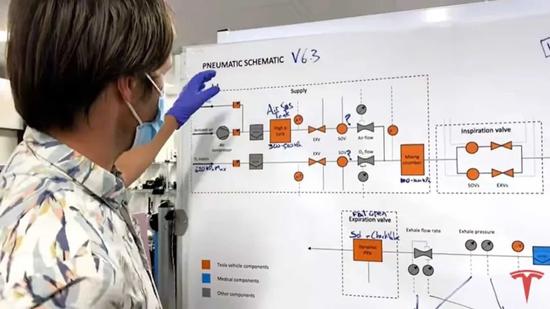 In the video, Tesla's engineers first demonstrated the first prototypes they developed and detailed their workflow.

First of all, through the air intake pipe, the air meeting the hospital use standard will enter the mixing room.

In this Tesla car part, oxygen and air mix with each other.

The mixed gas passes through a valve body that makes the pressure and volume waveforms, and then through a series of sensors, including the flow rate sensor and the pressure sensor.

Next, the gas mixture will pass through the filter and enter the patient's lungs. 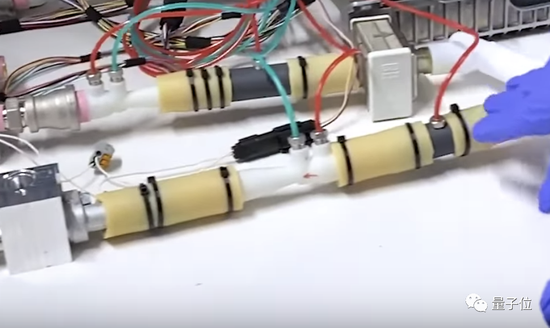 The ventilator's automation system is supported by the model 3 infotainment system.

The display is the central control screen used by model 3. 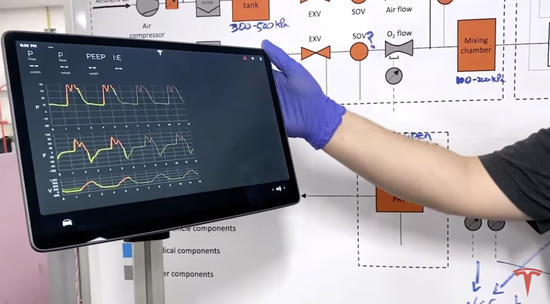 The computer controls the whole vehicle controller of model 3 and regulates the precision control valve to meet the specific needs of patients.

In addition, the system is equipped with a backup system: an oxygen cylinder, a backup battery and an air compressor. The standby system can provide emergency care for patients for 20-40 minutes. 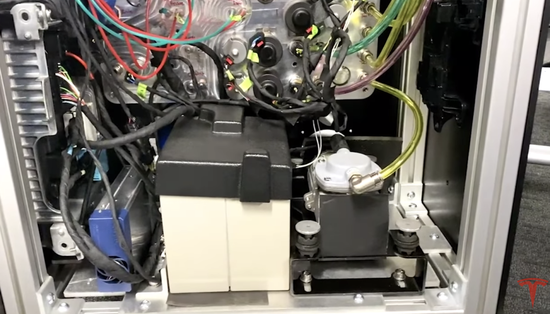 The UI draws the respiratory curve of the patient's lung, and the three charts correspond to the pressure, flow and gas volume respectively.

When there is an abnormal condition in the lung, the change of pressure waveform will be superimposed on the first 12 seconds of history, so that the doctor can directly see the change of the patient's state.

So the next thing Tesla has to do is to scale production and deliver the cattle that musk blows to wherever it needs to be.

Yes, through the Tesla distribution network, it can also be sent to Europe where the current epidemic is in full swing.

I boast, I speak hard, but what I said will come true.

The beginning and end of the dispute on mask's ventilator

Since last month, Tesla's plans to build a ventilator have been in full swing.

In a tweet on March 19th, Mask expressed the idea for the first time. He was concerned about the shortage of ventilators in the epidemic, saying that it would not be difficult for Tesla to build a ventilator:

Tesla's cars have advanced heating and ventilation systems, and SpaceX's spacecraft has life support systems. The ventilator is not difficult, but it can't be produced right away. 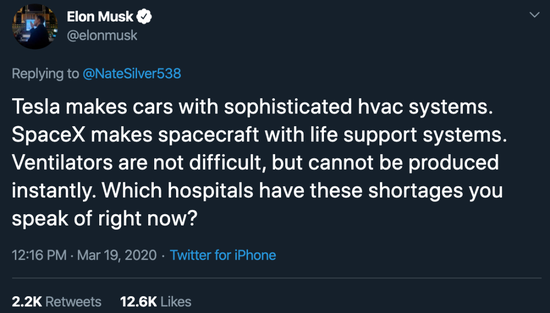 As the U.S. epidemic gradually worsened, trump called Tesla to build a ventilator, and the governor of New York State issued a similar request to ease the huge demand for ventilator in New York state.

But in the face of the serious shortage of respirators, the first measures taken by musk at that time werePurchase a batch of ventilator from China:

Yes, the Chinese market is oversupplied, so we bought 1255 FDA certified Resmed, Philips and Medtronic respirators on Friday and will fly them to Los Angeles.

After getting the ventilator, musk took out 1000 units and provided them to the areas with severe epidemic, and the rest were used for development.

This also makes gourmand netizens have a story, think musk boasted that he can make it, and finally imported it from China.

So on the 26th, musk tweeted that it would restart new york's super-factory and that it would produce ventilator equipment for patients with new crown pneumonia in new york, after revamping its factories and production lines.

On that day, medical device companyMedtronicOmar ishra, chief executive of Medtronic, confirmed in an interview with CNBC that he would work with Tesla.

Just unexpectedly, on the 31st, musk donated the ventilator again:

We have an additional FDA approved ventilator. Will ship to global hospitals in Tesla delivery area. The cost of equipment and transportation is free of charge. The only requirement is that patients need to use these ventilators immediately, not for storage.

However, Musk did not reveal the batch

So again, Twitter users are idle at home, and the comments are full of supervisory chivalry. 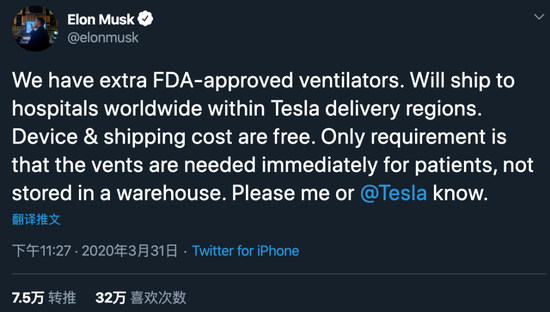 However, iron man is iron man. If you don't play according to common sense, you will be astonished.

On April 6, Tesla released a video on its official youtube, in which its engineers demonstrated:

One is the prototype of putting all the parts on the table;

The other is assembled equipment to show how it is used in hospitals.

It's true to speak with results and respond to queries with hard core actions. 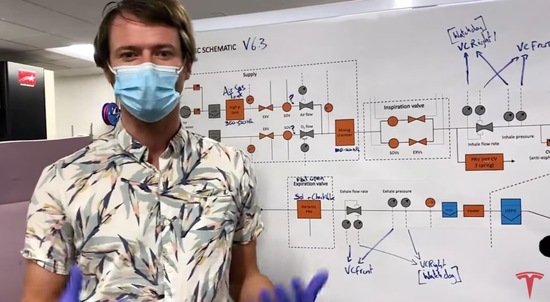 A big turn in netizens' attitude

Earlier, when musk just revealed that Tesla would build a ventilator, there was a lot of online questioning.

Some people mentioned the past of Musk's cave submarine and ridiculed musk for telling the story again.

A group of respirators donated by musk were actually referred to as CPAP (continuous positive airway pressure device), which caused widespread criticism, and even some people pointed out that musk was deliberately lying.

For a while, although there were many voices praising and thanking musk for his contribution, there was no small sound of questioning his performance and boasting.

Now, as soon as the prototype video is released, musk and his Tesla respond to everything with practical actions. 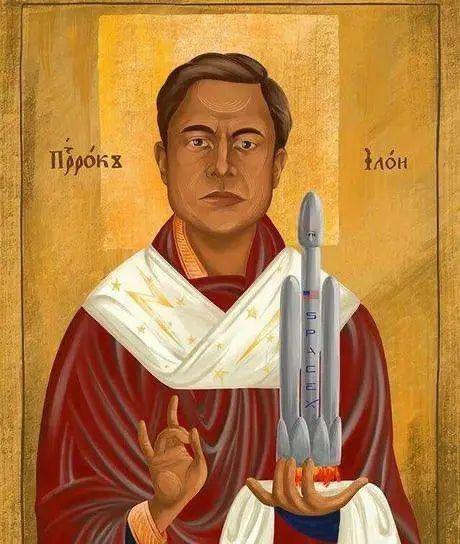 This work is impressive. The prototype has all the sensors and feedback control needed for the most advanced intensive care ventilator. How fast you are!

The use of Tesla parts / infrastructure to design the ventilator has won approval.

However, there are still doubts that Tesla is wasting its time not helping to produce the parts needed by professional ventilator manufacturers such as Medtronic, but making its own ventilator.

Of course, at this moment, more netizens are furious with this criticism: keyboard man!

But it also needs to be said that Musk and Tesla, not

Tesla is not the only manufacturer to transform its ventilator.

After trump announced the launch of the defense industry production act, Ford and general motors, among others, are also using their directors to produce medical equipment such as ventilators.

Ford is working with GE's health department to produce

The advantages of car companies in manufacturing supply chains and workshop operations, and the convenience of spare parts, 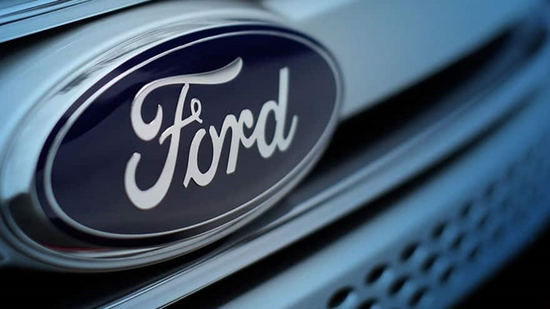 In China's fight against the epidemic, Wuling Automobile, BYD and other domestic car enterprises, have also turned to the production of medical to provide material support for the national anti-epidemic.

However, the ventilator of musk and Tesla has attracted more attention than other car companies. 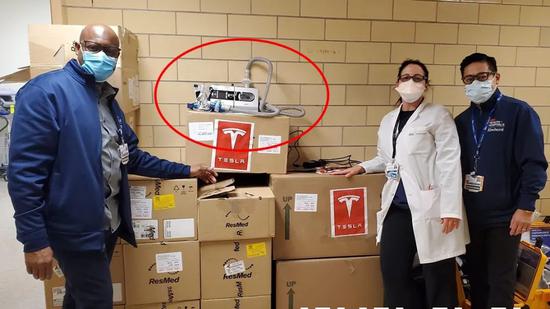 On the one hand, Tesla naturally has its own attention, and this time most of it is completed by electric vehicle parts.

On the other hand, the root cause is musk.

Despite the extraordinary achievements, innovative projects one by one, but also because of Twitte

Every time Musk blows a cow, some people believe it and others question it.

But the reason why musk is musk is that no matter how incredible a cow he blows, he can always achieve it in the end.

So he's Silicon Valley iron man and twitter braggart. He was questioned again and again, but proved himself again and again with the results. He never lacked respect, but he always used his actions to win more respect.