With the increasingly severe new crown epidemic in the United States, musk, who played with electric cars and rockets, once again became a cross-border "slash youth". This time, he is going to do a big job in the medical equipment industry, producing respirators to help doctors fight the epidemic. Recently, Tesla released a video on the company's YouTube channel, and their engineers have come up with a prototype ventilator.Most importantly, the Tesla ventilator can also share parts with the model 3. 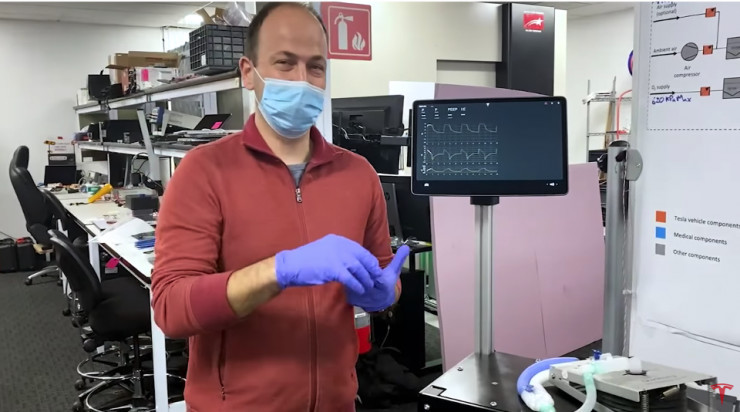 In the video, all engineers are "fully armed "(wearing masks and gloves) and next to their new invention. Instead of using components such as special compressors and pumps, Tesla's ventilator has switched to electric vehicle components. And the benefits of such a design are obvious —— not being stuck in the neck by the supply of spare parts, accelerating the mass production of ventilators.

"We want to use parts that we are really familiar with and reliable, so that we can achieve rapid mass production." Joseph mardall, Tesla's engineering director, said. "That's what we did this time."

The touch panel used in Tesla's self-developed ventilator is from model 3, which can display the intake and exhaust volume of oxygen and carbon dioxide. At the same time, the ventilator also uses the computer system of model 3, lithium battery, on-board pump, compressor, pipeline and oxygen mixing room.Since it's still a prototype product, it's still unknown when it will be mass produced and delivered to major hospitals in the United States. After all, the FDA has to test and approve it before it is put into use.

In fact, it's not from scratch for Tesla to build a ventilator. After all, Tesla's electric vehicle has a "biochemical defense mode". For SpaceX, it's even more obvious to keep astronauts breathing smoothly in outer space.

Earlier, Medtronic, the US medical equipment giant, said that the company was in contact with Tesla and hoped that the two sides could work together to increase ventilator production and fight the epidemic together. On April 3, musk tweeted that SpaceX is now helping Medtronic speed up the production of proportional solenoid valves.

As the most valuable auto company in the United States, Tesla's participation in medical equipment manufacturing is reasonable. After all, two big brothers, general motors and Ford, have started to work together with medical equipment manufacturers to speed up the production of respirators. However, they did not come up with their own design, but they were made according to the ready-made drawings.

In addition to developing the ventilator with the help of existing parts, musk also launched the "buy and buy" mode, purchasing the ventilator meeting the FDA standard and sending it to the hospital through its own channel.

"The problem now is not the manufacture of the ventilator, but the parts."Ventilator manufacturer Mick Farrell pointed out. "We've got hundreds of solutions from automotive, aerospace and defense companies, and they're really good. However, the fastest solution is to help us build the necessary parts, so that we can meet the needs of the hospital as soon as possible. "

In addition to the rapid manufacturing of medical equipment by various manufacturers, FDA has also accelerated the approval process of epidemic related products. However, Gail baura, a medical equipment expert, warns that it's not that easy to build a ventilator. It takes a lot of time.

"The design of medical equipment needs to meet a large number of professional engineering standards, which is the only way to get FDA certification." Baura explained. "So, while working together, manufacturers need a lot of time to validate the ventilator, even if it's" wartime. "Some experts also pointed out that it may take 18 months for the automobile enterprises to transform their production of ventilator, and the manufacturers have to take time to transform the production line.

Now we can only hope that tesla will speed up research and development to help health care workers end the global disaster as soon as possible.