Last Friday, foreign digital YouTube (ID: Everything Apple Pro, hereinafter EAP) released a video that exposed a large number of appearance details of the iPhone's ԡ 12 Pro Max that Apple will release this year. This video is based on the CAD drawing provided by Max weinbach, editor of XDA forum, and Jon Prosser, a well-known informant, also said that this CAD drawing is highly reliable. However, there are still some inaccurate details in this video, which will be pointed out below.

Here's what the video contains.

Later, he pointed out that the CAD drawing is only 70% accurate, and the incomplete accuracy is the location and size of the lens module, as well as the size of the bangs.

The most intuitive feeling is that the screen share will be further improved. 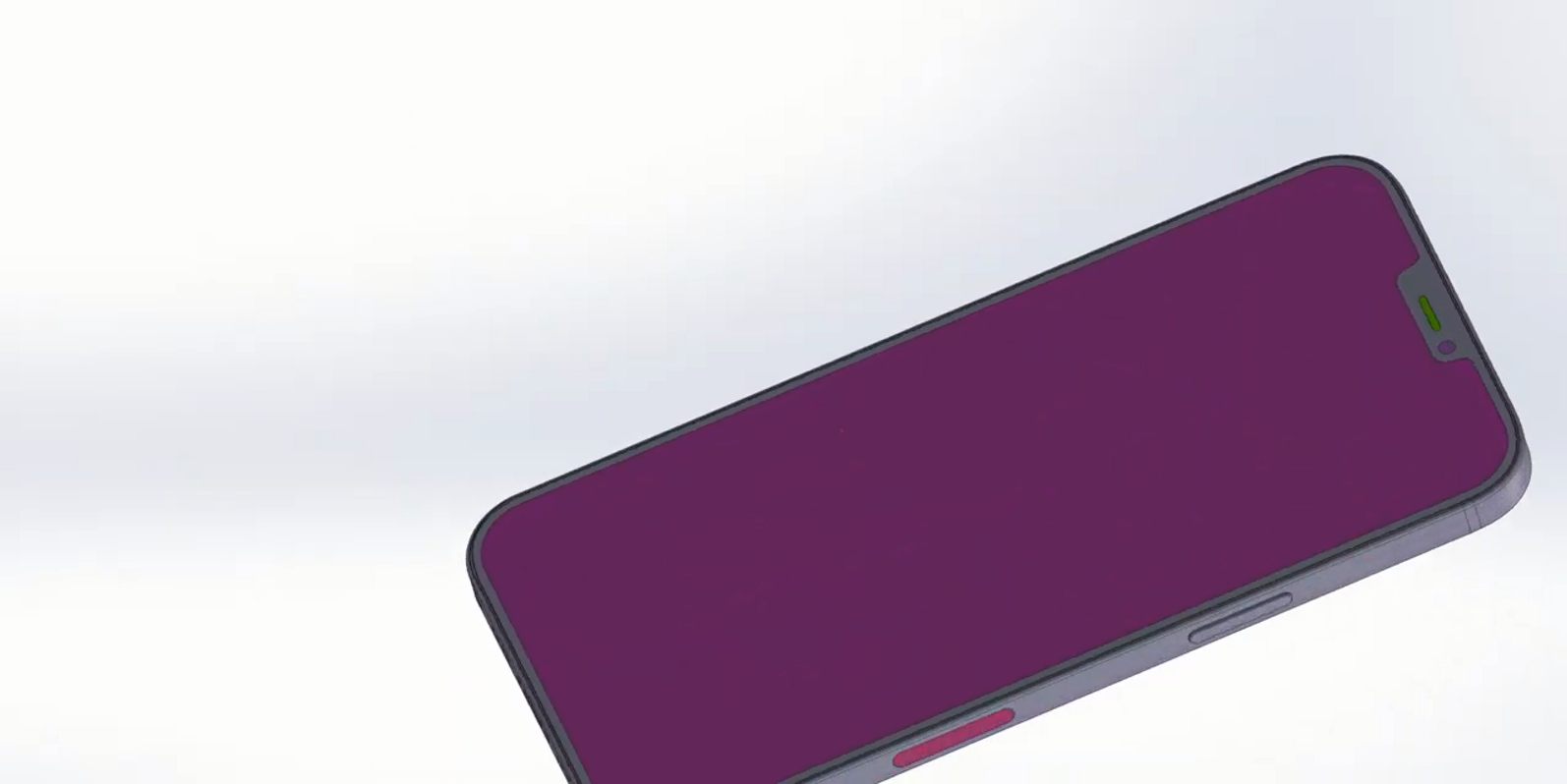 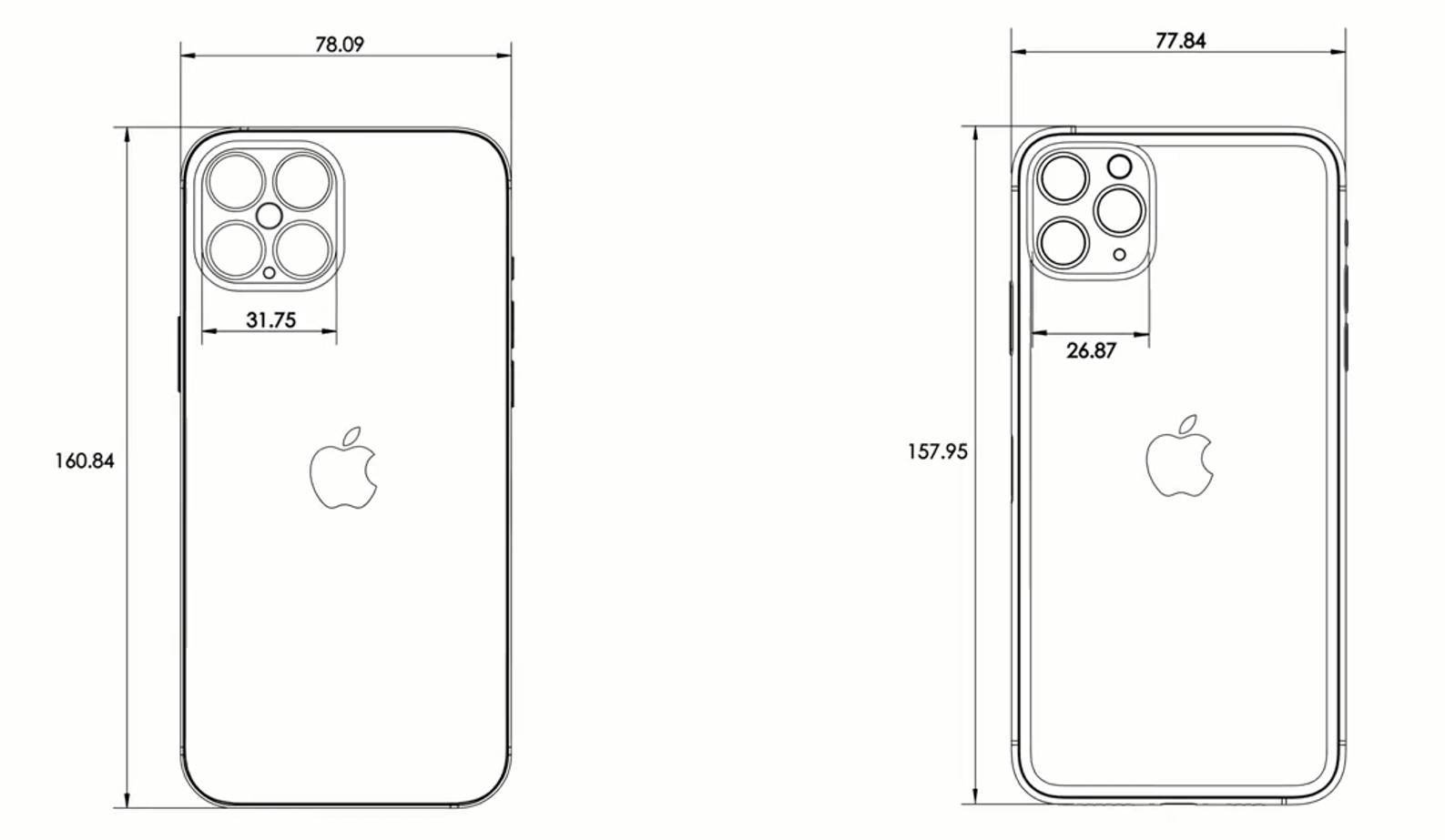 The most obvious change is the "bangs" part.

As can be seen from the CAD model, apple finally adopted the second plan. So it's certain that the look of Apple's flagship product will change this year for the first time in three years.

According to Max weinbach, editor of XDA, the narrowed "bangs" will be slightly longer than what oneplus 6 has. However, as mentioned above, this "Liu Hai" has not been finalized before writing, but we can roughly know that its size and curvature will change. 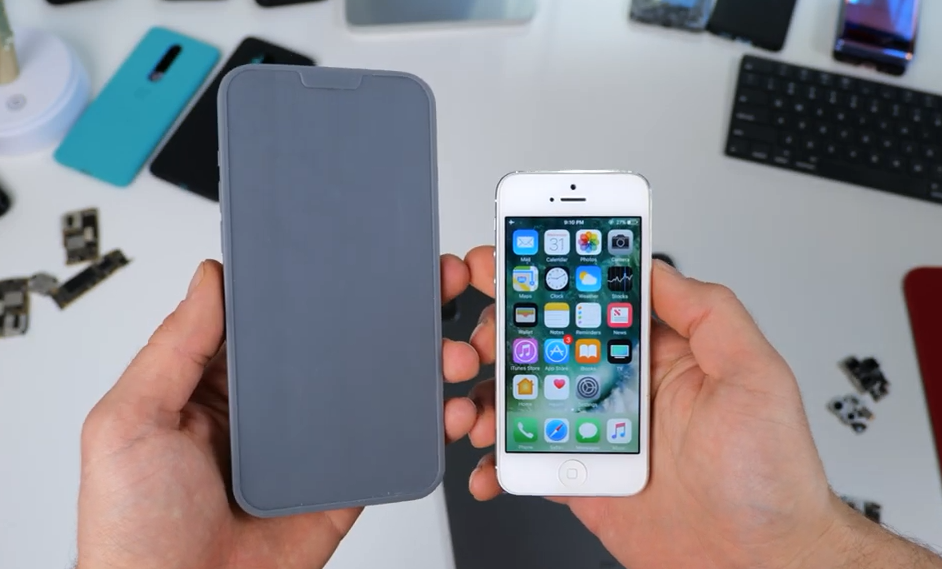 According to Bloomberg news, at least two of the iPhone 12 series will have flat screens. It is known that the iPhone 12 Pro Series may use flat screen, but the iPhone 12 is unknown. The screen material is not 2.5D glass, so it is not different from the previous generation, but there will be slight bending at the extreme edge.

The back glass is slightly above the metal middle frame of the phone, which is not as prominent as the iPhone 11 Pro max. If the mobile phone is accidentally dropped, it can ensure more safety.

Antenna length increases. This generation is up to 1.83 mm, nearly twice the size of the iPhone 11 Pro max, apparently because 5g is finally added. Apple is trying its best to develop new antenna technology. This generation of products will have faster cellular data transmission rate and WiFi rate. 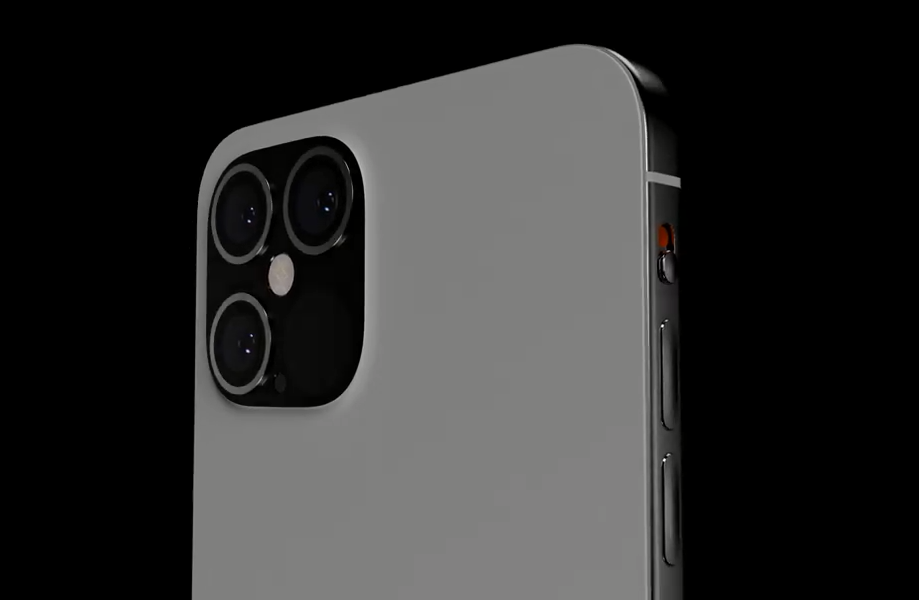 There is no sign that the mute control will change from landscape to landscape. 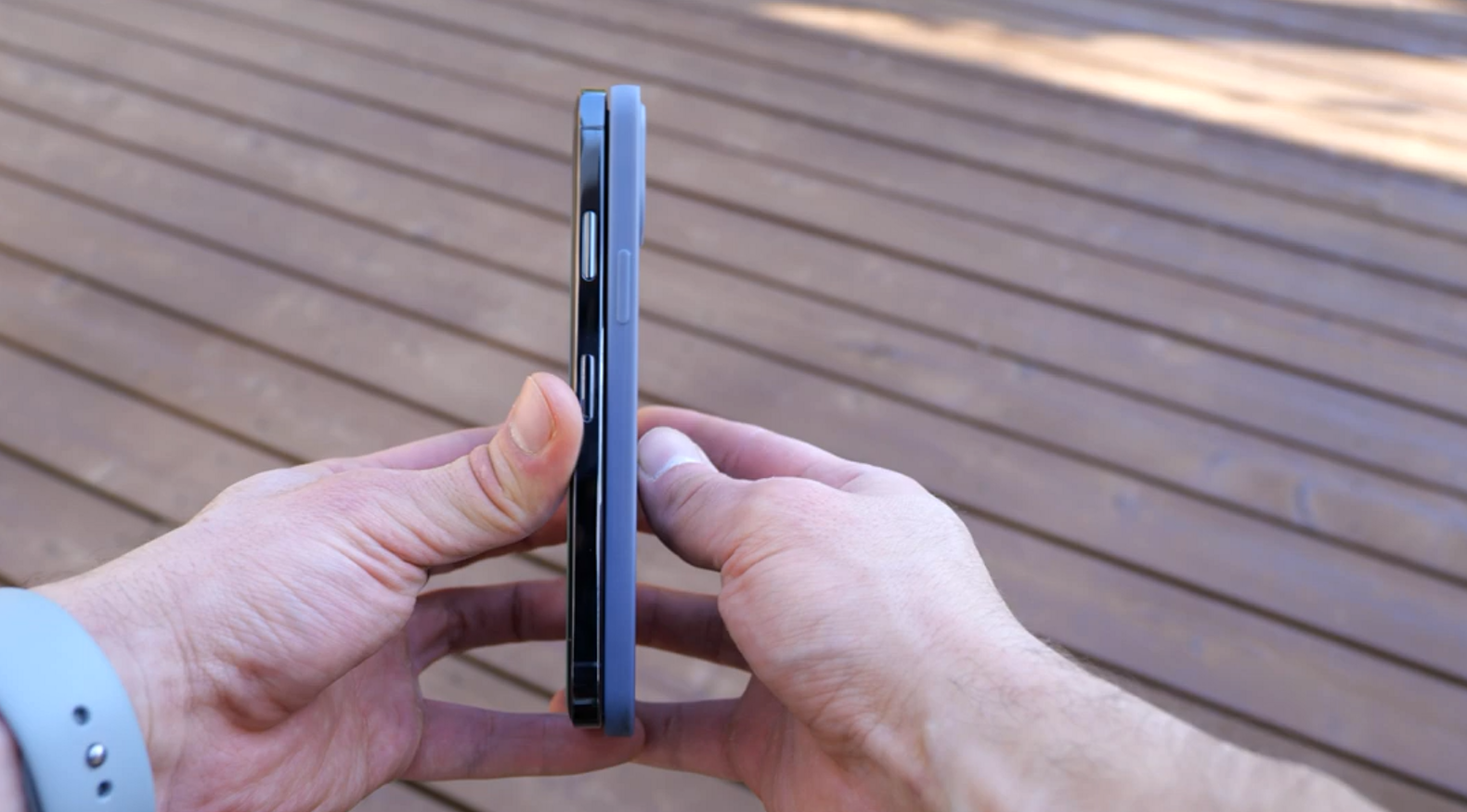 All buttons on the phone are lowered, which is more comfortable for a 6.7-inch mobile phone.

The SIM slot position was changed to the other side of the body. The reason for Apple's move is still unknown, but EAP speculates that the iPhone 12 Pro Max motherboard may move.

Instead of the original SIM card slot, it's a small version of the iPad Pro smart connector interface. It's not clear what it's used for, but there's a rumor that the iPhone needs to support the stylus, but it's not realistic to charge the apple pencil on the iPad pro, because there's a power button on this side.

IPhone 12 Pro Max continues to use lightning interface, and usb-c interface is not suitable for iPhone products again. The number of holes in the lower right speaker will be reduced from 7 to 6, but the sound quality will be improved. According to Max weinbach, the volume of this speaker will be increased by 10% - 15% compared with the previous generation, and it will have a larger dynamic range.

Finally, there is the color matching part. It is basically determined that the iPhone 12 Pro Series will add navy blue color. Apple is testing two different shades of Navy, but both are darker. The color that will be replaced may be the very hot dark night green color this year.

The iPhone 12, instead of the pro version, still features color. New colors include light blue, new violet shade and light orange. Apple is considering choosing two of these three colors to be the iPhone 12 color, but it is still unknown which two will replace the iPhone 11 color.

As far as the current disclosure is concerned, this year's iPhone 12 series should be the biggest change in the past three years, but the disclosure is not over. EAP said it would release videos again this week on the iPhone 12 Pro Max camera and screen parameters, including the latest news on the 120Hz screen refresh rate.

Returning to the classic look of the iPhone 4, supplemented by a smaller version of "bangs" and a very narrow frame, it looks like there will be another rush after the iPhone is released this year.

Related news
Three camera plus iPhone 11 Pro Max DxO score to be announced
IPhone 12 Pro Max exploded graphic: vintage look, ultimate frame
The message says iPhone 12Pro/Pro Max model will have Hz 120 screen
Four versions differ: iPhone 12Pro Max or the only true flagship
Apple releases iPhone 12 pro and iPhone 12 Pro Max: 5g, lidar, new color
The first batch of iPhone 12 Pro Max sold out for 12000 yuan
IPhone 12 mini, 12 Pro Max initial evaluation: 4000 yuan difference, what's the difference?
JPMorgan report shows demand for iPhone 12 pro and iPhone 12 Pro Max is in short supply
Apple iPhone 13 Pro Max gets DisplayMate Best Smartphone Show Award
Xiaomi 12S Ultra challenges iPhone 13 Pro Max! A one
Hot news this week
The first in the world! Intelligent screening system for visual impairment of infants and young children
World's first: Sun Yat-sen University has developed a mobile phone intelligent screening system for infants with visual impairment
Sources said Samsung Electronics is considering cutting chip production in the first quarter or a huge loss
The source code of the official website shows that the Microsoft Build 2023 developer Conference will be held on May 23-25.
The rendered picture of Meizu experience Center is exposed: there are cars and mobile phones to build 1000 stores.
At least 29000 facilities were affected, and WeiUnicom announced that there were serious loopholes in QTS and QuTS hero.
256G is not enough! Bloggers bought Xiaomi phone 512G has used up more than 300G: WeChat accounted for 70G
Regret that the medicine is gone! Apple closes downgrade channels for multiple versions such as iOS on 16-15-12.
Xiaomi tablet 6 key specifications steal run: high brush domestic screen Snapdragon 870 can also play!
Musk, the richest man in the world, also suffered a huge loss when he bought bitcoin by Tesla, who "cut leeks".
The most popular news this week
Microsoft's new version of Bing appears briefly: full access to ChatGPT
Bill Gates: the history of ChatGPT is as significant as "PC or the birth of the Internet"
The "iPhone 14" Letv mobile phone Y1 Pro+ sold for only 499 yuan becomes JD.com TOP3.
Man QQ Music lost 1.32 million in playing games in the studio: he was fooled by the anchor!
Intel China special edition Xinshen U suddenly went on sale: 1599 yuan cost-effective
The price of ZTE flagship endorsed by Wu Jing has been reduced! The overall screen impression is better than Apple Smart Island.
Meizu 20 Series supports UWB Ultra Wideband Technology through Radio approval
Huawei P60 series will debut in March: Snapdragon 8+ has a larger aperture than the iPhone 14 Pro Max
China suddenly announces new developments in 6G, and there is little hope that the United States will surpass 6G technology.
Dell said it was laying off 5 percent of its workforce, affecting about 6,650 jobs