Recently, the upcoming windows 10 version 2004 (20h1) feature update was officially named may 2020, and the build 19041.207 version update was delivered to the release preview channel users. This indicates that the function update has entered the final stage, and it is expected to officially meet you next month. 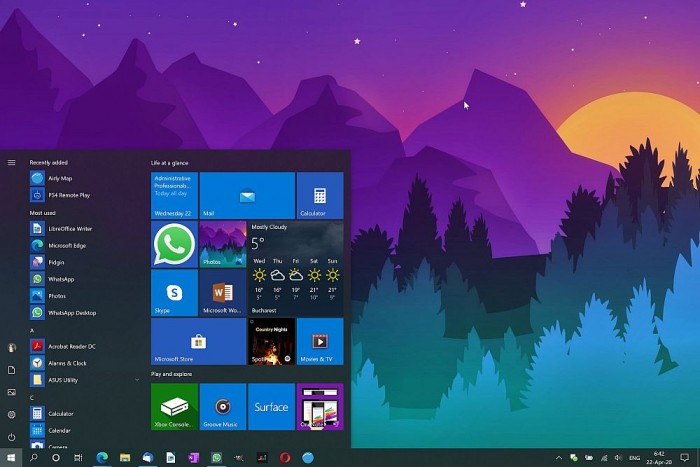 Bogdan PopA, editor of foreign media Softpedia, has been installing build 19041.207 for more than a week. He has found three important things.

For example, the second generation of windows subsystem for Linux is introduced in May 2020 function update, which redefines windows search, configuration file of windows sandbox, GPU temperature of task manager, improvement of Bluetooth, and many optimizations of setting interface.

Windows 10 may 2020 is more like a big upgrade of experience. These new functions and features give you a different feeling of interaction.

Second, the windows 10 may 2020 (version 2004) feature update is very elegant and everything is running smoothly. While there is no guarantee that there will be no problems after the official release, the experience is both fluid and responsive.

Windows Insider success of the project is not only to let the user experience all kinds of new functions in advance, but also to collect the feedback of the user's suggestions on the new functions and new features, and then make the optimization adjustment in time.

In the windows 10 may 2020 update, Microsoft listened to the user's suggestions to separate some functions from the system and update them through the Microsoft Store and optional update mode, which greatly reduced errors, optimized device management and enabled users to adjust and update according to their own needs.

Although Microsoft did not fully follow the expectations of users, the good news is that Microsoft attaches great importance to it and constantly adopts and deploys user feedback. This interaction has formed a virtuous circle, making windows 10 better and more suitable for you.

Related news
Microsoft will block Windows 10 May 2019 updates for these devices
Microsoft Windows 10 May 2019 update officially started to push globally within a few weeks
RTM Windows 10May 2020 Experience Report: Finding Three Important Things
Windows 10May 2020 information summary: release time, new features, etc .(figure)
Get ready: Microsoft starts to push windows 10 may 2020 updates "step by step" this week
Windows 10 may 2020 ready to launch: inventory of major new features (Figure)
A series of known problems still exist in the 15 month development of windows 10 may 2020
Lenovo released a notice acknowledging that windows 10 may 2020 causes many problems (Figure)
Hot news this week
A small plane in the US has crashed into a 30-metre high voltage power line and got stuck: 80,000 people affected
Can recording others' wechat chat records be used as evidence? The Beijing Internet Court has an answer
Alibaba launched a new cross-border e-commerce platform in Spain, aiming to operate independently in the middle and high-end market
It's not just Huawei! Beidou has penetrated more than 20 industries and applied more than 15.5 million products
When pure water is used in China team to solve the problem of seawater hydrogen production: it is expected to become an original industry
A Tesla crashed into two cars in Taizhou, Zhejiang province, killing two and injuring one, police said
Breaking the spell of "Android 3 year must card", the new Breguet mobile phone will be sold for the first time tomorrow: from RMB3499
The appearance of Xiaomi's mini console is revealed for the first time: an all-metal body with a strong apple smell
Be careful with your phone for a long time! The aunt played with her mobile phone so much that her fingers got stuck
Google's Project Zero team accuses vendors of slacking after ARM GPU bug exposes Android upgrade woes
The most popular news this week
Why is the Apple Pencil 2 not supported? iFixit takes apart the iPad 10 to find out
Zte's experience proves that there is no way out of appeasement and peace can only be fought out
China's growing presence in the global high-tech sector is unacceptable to the US
Us to investigate Lapsus$hack, Microsoft, Nvidia and others were breached
From January to October this year, the number of global travel app downloads approached 2 billion, with China's Amap, Baidu Map and Railway 12306 taking the top three places
With the acquisition of Pulse, Mozilla will develop a new approach to machine learning
Did the United States achieve its goal? More than 40 suppliers went to the United States with TSMC
Microsoft may not be able to offer its Microsoft 365 service in German schools after two years of efforts failed
A record $50 million in compensation! In the final judgment of the dispute over the infringement of Minecraft by Mini-World, NetEase won the lawsuit
Manufacturers like Samsung and Xiaomi have been affected. Google has revealed a dangerous flaw that threatens millions of Android devices