60 Starlink satellites will be launched again. Musk will talk about the public test satellite internet within 6 months

Someone has to do it, so it may as well be me. On April 22, the Falcon 9 rocket was launched from the Kennedy Space Center Base in Florida, sending the seventh batch of 60 satellites into space.In total, SpaceX will launch 422 satellites. SpaceX plans to send more than 1000 satellites to the sky by the end of this year. According to the original plan, musk expects to launch a total of 42000 satellites. If all the satellites swish to the sky according to Musk's plan, then our network will no longer be limited by the ground infrastructure, and there are their satellites everywhere, not only the network speed will be faster, but also enjoy low-cost wireless, kill two birds with one stone, why not do it. Then added: the initial test will be applied to high latitude areas. Star chain services will initially be available to customers in Canada and North America in 2020, and further expand to the rest of the world in 2021.

But musk is musk after all, he has been doing something beyond imagination.

What is star chain plan?

Having said so much, maybe many children's shoes don't understand what the star chain project of musk is? 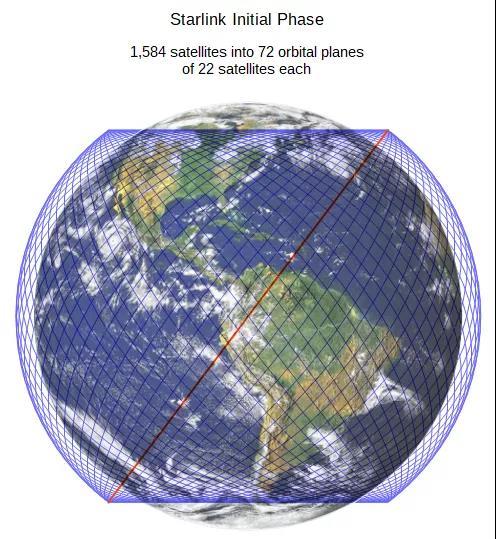 The ultimate goal of the plan is to build the world's largest WiFi network, and it will officially start serving all mankind in 2020.

If the plan is implemented successfully, "SpaceX's satellite will provide ubiquitous wireless network services for all parts of the earth."

SpaceX claims that the "star chain program" can provide Internet services with at least 1Gbps bandwidth to any user in any region of the world, and the cost is extremely low. That is to say, at that time, users can use wireless Internet as unlimited and ultra-low price as GPS.

The so-called star chains of musk are actually communication satellites.

Satellite communication is very high from the earth, so it can cover a wide area, and will not be affected by the terrain and natural disasters, which are advantages over the ground base station.

Therefore, in order to achieve this goal, musk will send satellites to space in batches every once in a while. He expects that when 42000 satellites are launched, the satellite chain will provide low-cost and high-speed wireless networks for the world.

For example, those living in remote areas can get rid of the trouble of no network completely, and can easily access to the new era of Internet of all things, which is destined to be a gospel for them, and even change their way of life completely.

For example, when the ground encounters natural disasters, such as earthquakes, tsunamis, typhoons and other extreme weather, even if the ground network is paralyzed, it can also use the star chain network for disaster relief and communication, which is undoubtedly good news for disaster prevention and control.

To be honest, it's worth looking forward to if we don't consider other factors.

Why is musk confident in making the star chain plan?

At this time, a netizen asked, "how expensive is this thing? Is SpaceX still alive after musk launches 42000 satellites?"?

Why do you say that? In fact, there are lessons from the past.

After all, the competition for Satellite Internet began in the 1990s. Motorola's famous iridium system had wanted to do this for a long time. As a result, before 66 satellites were launched, the project went bankrupt. Bill Gates's teledesic also went bankrupt after burning $9 billion. Oneweb, one of its competitors, has also gone bankrupt because of financing problems.

butSpaceX can not only build its own rockets, but also reuse them, this cost saving is not a little bit.

Another reason, of course, isThe immeasurable commercial value of the star chain after its completion, because in essence, musk is still a businessman。

Musk once said in an interview that after the completion of the star chain, the annual revenue is expected to reach 30 billion US dollars, 10 times that of space X.

So what is the cost of launching a satellite? Is musk worth so much?

The manufacturing cost of one earth orbit satellite in the SpaceX satellite chain plan is about 1 million US dollars, about 7 million yuan, and one satellite weighs about 260 kg. According to the Research Report of Everbright Securities, kuaizhou-1a is a rocket with commercial advantages in China. If a low orbit satellite is launched, the launch cost is 10000 US dollars / kg.

The launch cost of SpaceX Falcon heavy rocket is 1400 USD / kg. However, the financing situation of SpaceX is not bad. The launch cost is relatively low and there is income. Therefore, it is not necessary to worry about the cost for the time being. After all, Musk's vision on the commercial value after the completion of the star chain is also expected to spend a little more money in the early stage.

That is to say, as long as SpaceX's financial situation allows in the future, the desire to use satellites to access the Internet is just around the corner.

Starlink has its drawbacks

After sending the satellite to space for the seventh time, many foreign Netizens found that the stars in the sky were actually rowing in line from the sky, and shared the spectacle on twitter, but in fact, it was not a meteor. The row of stars was actually a "star chain". 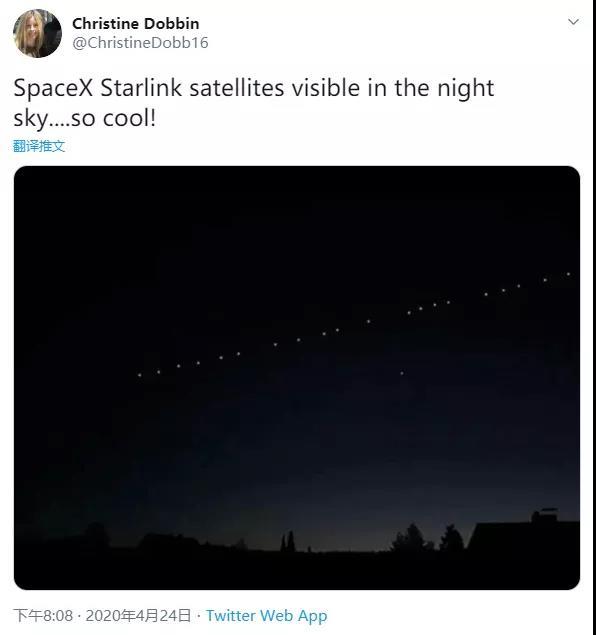 So why can we see it?

This is because after the satellite just left the rocket, because the distance from the ground is relatively close, people can use the naked eye to observe the star chain passing through the sky.

In order to see these stars anytime and anywhere, some fans have also set up a website specifically for this purpose: https://findstarlink.com/. As long as you enter the current location in the website, you can find the best observation time.

It's convenient for netizens to watch the satellite. The astronomical observers are not happy.

Dennis Vida (Denis Vida), a meteor researcher at the University of Western Ontario, said in a blog post last year:

"It must be noted what our sky will look like when they plan to launch a total of 42000 satellites. This could completely deny us any optical meteor observations until 2024. "

In response, musk said on twitter that the new wave of satellites has adjusted the angle of solar panel placement during the satellite's orbital lifting process, which is expected to reduce the degree of reflection.

Although mask claims to be improving, now it seems that he has not achieved very good results, but it is still lighting up.

Another concern of astronomical observers is that launching so many satellites is likely to cause more space junk, which will lead to chain reaction.

The satellite chain project plans to launch 42000 ultra-low orbit satellites to reach the global network coverage. At the same time, the service life of each satellite is about 5 to 6 years. Therefore, the scrapping of each satellite will generate a lot of space waste.

But mask doesn't care about the concerns and objections of astronomical observers. In his opinion, this is a matter for the benefit of all mankind. Even if space garbage is generated, according to the current development speed of science and technology, we can make garbage and clean up garbage.

Related news
Starlink Internet Satellite Enters Test Stage
SpaceX has again successfully launched more than 60 satellites for its Starlink satellite internet constellation
SpaceX have put more than 350 Starlink Internet satellites in orbit
SpaceX successfully launched 60 Starlink satellites into the space Internet Era
60 Starlink satellites will be launched again. Musk will talk about the public test satellite internet within 6 months
Starlink website code shows the appearance and test details of the Internet satellite antenna
Super US 95% broadband: Starlink's measured network speed exceeds 160mbps!
Musk: Starlink Satellite Internet speed will double by the end of the year and is expected to cover the world next year
SpaceX is preparing to launch its new fleet of Starlink laser Starlink satellites to provide wider Internet service coverage
800 billion! Musk is taking Starlink to an IPO
Hot news this week
The first in the world! Intelligent screening system for visual impairment of infants and young children
World's first: Sun Yat-sen University has developed a mobile phone intelligent screening system for infants with visual impairment
Sources said Samsung Electronics is considering cutting chip production in the first quarter or a huge loss
The source code of the official website shows that the Microsoft Build 2023 developer Conference will be held on May 23-25.
The rendered picture of Meizu experience Center is exposed: there are cars and mobile phones to build 1000 stores.
At least 29000 facilities were affected, and WeiUnicom announced that there were serious loopholes in QTS and QuTS hero.
256G is not enough! Bloggers bought Xiaomi phone 512G has used up more than 300G: WeChat accounted for 70G
Regret that the medicine is gone! Apple closes downgrade channels for multiple versions such as iOS on 16-15-12.
Xiaomi tablet 6 key specifications steal run: high brush domestic screen Snapdragon 870 can also play!
Musk, the richest man in the world, also suffered a huge loss when he bought bitcoin by Tesla, who "cut leeks".
The most popular news this week
Microsoft's new version of Bing appears briefly: full access to ChatGPT
Bill Gates: the history of ChatGPT is as significant as "PC or the birth of the Internet"
The "iPhone 14" Letv mobile phone Y1 Pro+ sold for only 499 yuan becomes JD.com TOP3.
Man QQ Music lost 1.32 million in playing games in the studio: he was fooled by the anchor!
Intel China special edition Xinshen U suddenly went on sale: 1599 yuan cost-effective
The price of ZTE flagship endorsed by Wu Jing has been reduced! The overall screen impression is better than Apple Smart Island.
Meizu 20 Series supports UWB Ultra Wideband Technology through Radio approval
Huawei P60 series will debut in March: Snapdragon 8+ has a larger aperture than the iPhone 14 Pro Max
China suddenly announces new developments in 6G, and there is little hope that the United States will surpass 6G technology.
Dell said it was laying off 5 percent of its workforce, affecting about 6,650 jobs