At two o'clock in the afternoon, the conference was held as scheduled. What are the surprises brought by Xiaomi?

At the beginning of the conference, Lei Jun, CEO of Xiaomi recalled the 10th anniversary of Xiaomi. As Xiaomi's first work, MIUI also ushered in the decade. At this special time node, Xiaomi brought his dream work of ten years - MIUI 12.

With the launch of MIUI 12, Xiaomi called it "the most challenging", that is, announcing a challenge to the IOS system.

According to Jin Fan, general director of MIUI experience, MIUI 12 is based on "MIUI light cone dynamic effect architecture", including animation engine, rendering engine and illustration engine, which can make its system's core scene animation comparable to IOS. At the press conference, Jin Fan repeatedly emphasized the special features of MIUI 12 "feel real, touch imagination". In the dynamic design of the system, MIUI 12 shows its authenticity based side in many places, including the dynamic of the control center icon, the receipt of notes, the real perspective of dynamic weather, etc. "Flare" can record all sensitive behaviors of app and present them to users. When the application uses the camera, recording and positioning permission, the system will give an obvious prompt. Click the prompt to control.

"Intercepting network" can completely prohibit background use of camera and background wake-up. When the application obtains permission, there are "allow only in use" and "allow this time" options to select. For apps with unclear permission purpose, the "always allow" option is removed. In addition, when sharing photos, sensitive information can be erased to prevent privacy from being shared synchronously.

"Hidden mask" is to provide users with a blank pass. MIUI 12 only provides the virtual identity ID to the application, returns the data right to the user, and can change the identity at any time.

It is worth mentioning that MIUI 12 is the world's first Rhine certified system. 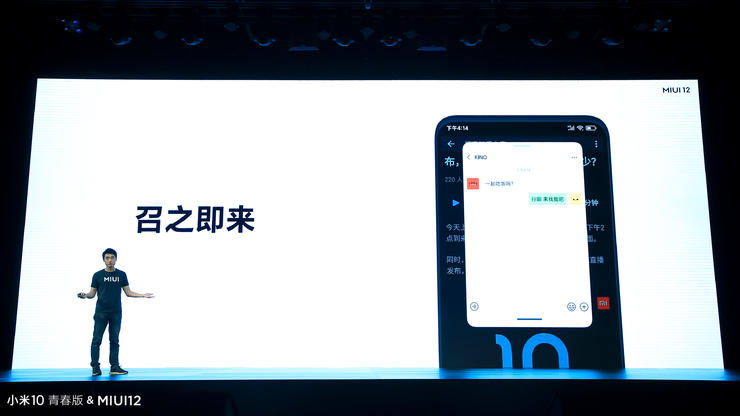 Multi-task aspect, MIUI 12 added an important function —— supports the global free window, can realize the call to come, wave to go, one step hangs and so on many kinds of scene pattern.

The global free window conforms to the intuition of gesture operation. When the message comes, you can slide gently to expand into the small window mode, and then slide upward to exit. For apps that only need to be viewed temporarily, drag them to the corner of the screen to hang them. After half a year's testing, the AI phone assistant changed to "Ai call" and was officially launched on MIUI 12. Users can not only customize the prologue, freely switch automatic response or manual response, but also direct automatic answer.

Moreover, in the AI algorithm, relying on the self-study Lingxian algorithm, MIUI 12 can intelligently perceive the motion state, and it is not easy to cause loss.

With regard to the release plan, MIUI 12 stable edition will be fully upgraded by the end of June, and the application for internal test of development edition is now open. (the distribution plan is shown in the figure)

Millet 10 youth version is undoubtedly the main hardware of this conference.

From the appearance, the body thickness of Xiaomi 10 youth version is 7.88mm, with a weight of 192g; it can be said to be very light. There are five colors for the body, which are peach grapefruit, four seasons spring milk green, White Peach Oolong, blueberry mint and black Qiao storm.

The camera is undoubtedly the focus of Xiaomi 10 Youth Edition, and it can be seen from the strong publicity in the early stage. 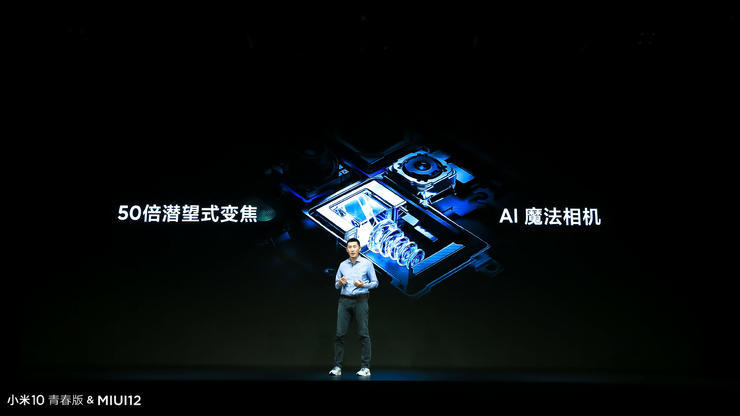 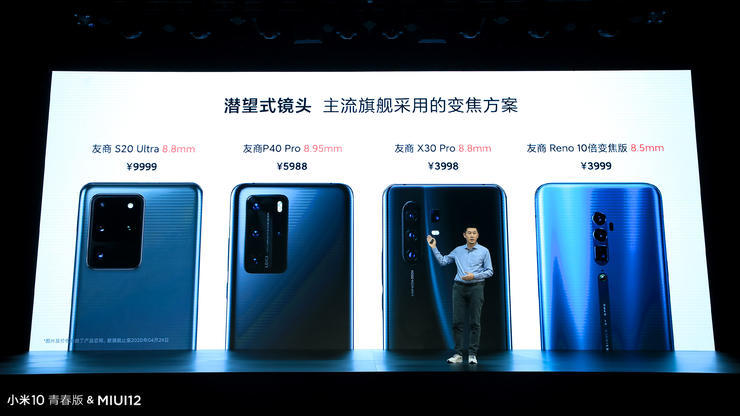 It is worth mentioning that when introducing the camera module, Chang Cheng also did not forget to check in with his friend's zoom scheme and its price. 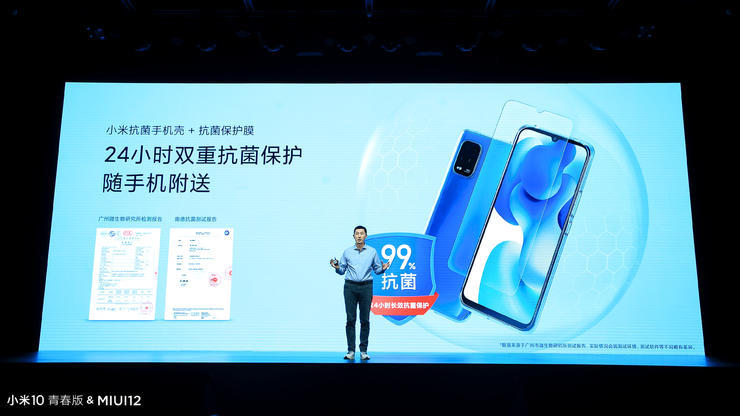 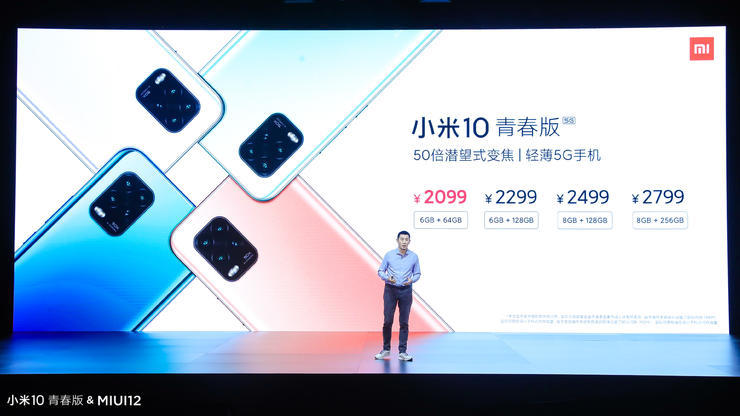 There is no doubt that Xiaomi 10 Youth Edition is a product to lower the threshold of Xiaomi 10 series. Its starting price of 2099 yuan and the advantage of 50 times zoom are enough to see that this is a sincere product. As a result, the price span of millet 10 has ranged from 2099 to 5999.

For MIUI 12, Xiaomi's ten-year dream is more like a bonus to the product.

Related news
Pan jiutang: MIUI is comparable to IOS, Apple users can buy Xiaomi 10 at ease
MIUI 12 threatens to challenge IOS animation and the cheapest Xiaomi 5g mobile phone in history
MIUI 12 evaluation: an upgrade that may bring the domestic Android system to a new height
Director of Xiaomi camera department sun MIUI 12 brand new camera: all the icons are redrawn, the more you use them, the more you love them
Xiaomi announced the first time in 10 years that the development version of MIUI 12.5 was stopped
Experience IOS! Redmi K40 HiTi MIUI 12.5 stable
Experience comparable to IOS! Xiaomi 9 transparent exclusive edition Xiti MIUI 12.5 stable Edition
Xiaomi announces a large number of models to upgrade the new MIUI! Census is comparable to iOS
Hot news this week
The developer of the dating app Tinder has reached an agreement with Google over billing rules for its app store
Still did it! Canada has banned Huawei and ZTE from participating in the country's 5G network on "national security" grounds
Red Elf Lightning erupts in the Himalayas Spectacular Spectacle: Experts Reveal What Exactly Is This?
The founder of the Internet Quick Hand Su Hua was taken away for investigation, and the fast hand responded: the news was not true
Wang Xiang, president of Xiaomi, explained that a shortage of low-end chips is a major challenge in overseas markets
Or for Studio Display Pro, the release of Apple's 27-inch Mini LED-backlit Display has been delayed by October
Tencent Q1: The business service business has "slightly decreased" year -on -year, and resource centralized video cloud and network security | View financial report
One picture to understand! Blue Factory has issued 3 new machines in a row: self-developed chip blessing, the narrowest lower border
Sony released the active noise-canceling headphones WH-1000XM5, equipped with 2 chips and 8 microphones
Tencent established a smart technology company in Chengdu, and its business scope includes Internet data services
The most popular news this week
How does the Internet make People Copy each other
Fed Vice Chairman: The future digital dollar may complement the coexistence of stablecoins and commercial bank currencies
ZHANG Pingan, CEO of HUAWEI CLOUD: The value of data governance in China has not been fully tapped Data and AI should be accelerated
Shenzhen Atmosphere! The sales price of mobile phones, computers and other products is subsidized by 15%
Microsoft shows third -party components: Win11 chicken rib function is saved
No need to grab it! Sony announced an increase in PS5 shipments
Audi advertising poster photos only sell for 8 yuan? Photographers question the unreasonable use of the photo purchase
Twitter spent $150 million to settle privacy and security lawsuits with the U.S. government
Hong Kong Hang Seng Index Opens 0.5% Baidu Hong Kong Stocks Open More Than 2%
Amazon's new CEO participated in a shareholders' meeting for the first time: to restore normal profit, ready to cut off the excess warehouse