Director of Xiaomi camera department sun MIUI 12 brand new camera: all the icons are redrawn, the more you use them, the more you love them

At the launch of Xiaomi 10 Youth Edition on April 27, MIUI 12 was officially released. On that day, the application for internal test of 22 models was launched, and the stable version will be successively pushed at the end of June.

Ten years as a MIUI masterpiece, MIUI 12 has changed from animation to icons, claiming to challenge iOS.It is reported that as many as 60 icons have been redrawn for the camera alone. 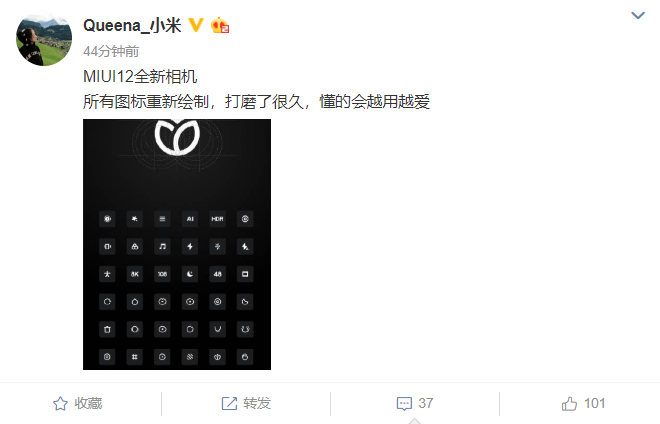 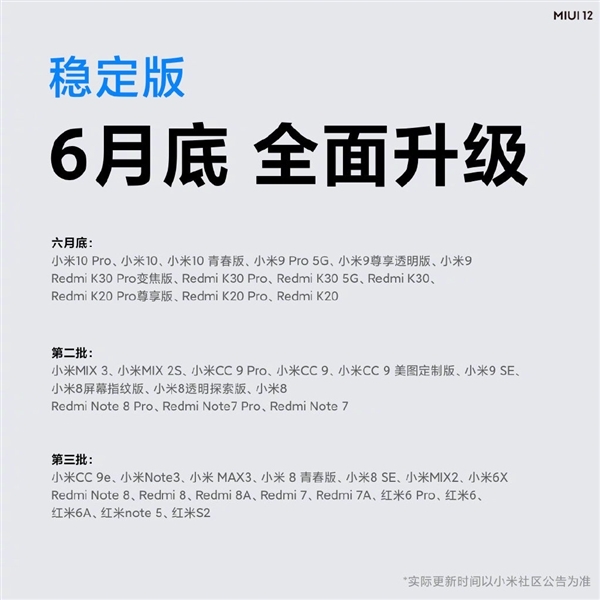 It is reported thatThe stable version of MIUI 12 is planned to be upgraded in three batches. At the end of June, the first batch of models include Xiaomi 10 pro, Xiaomi 10, Xiaomi 10 youth version, etc., with a total of 13 models.

MIUI 12 is Xiaomi's dream for the 10th anniversary. It has been upgraded in animation effect, super wallpaper, privacy protection, multi task, sports health and other aspects.

In terms of multi task, it supports global free window and adapts to a variety of use scenarios. When a message is received, it can slide gently to enter the small window mode, and then slide upward to exit. It is said to be the best mobile multi task solution in the world.

Moreover, based on the self-developed string algorithm, Xiaomi mobile phone can AI intelligent perception of the state of motion, is the only mainstream mobile phone brand that can do this except Google, mobile phone pocket can automatically record the whole day of walking, running, riding, climbing stairs, and power consumption of less than 1%, put on the pillow can also simply record the state of sleep, even snoring and sleep.

Related news
Xiaomi MIUI 9 years old is fast! Warm up the MIUI 11 in advance, the tickets for the conference are ready
MIUI 12 threatens to challenge IOS animation and the cheapest Xiaomi 5g mobile phone in history
Lei Jun's Xiaomi 10 Pro upgrade MIUI 12： feel like a new mobile phone
MIUI 12 evaluation: an upgrade that may bring the domestic Android system to a new height
Director of Xiaomi camera department sun MIUI 12 brand new camera: all the icons are redrawn, the more you use them, the more you love them
Speed! Official confirmation: MIUI 12 based on Android 11 will be released soon
MIUI development version upgrade! 4G was "discriminated against"
Mi MIUI announced this week: MIUI 13 bugs have been fixed
Hot news this week
Young people can't change their mobile phones one brother pressure in the channel inventory up to 50 million
Chinese mysterious female rich 560 million buy European luxury homes: the full amount of cash is paid at a time
Criminal gang candid courier list takes the money 8 people to be arrested
Do you make feed after Yi Lord? Zhenghong Technology M & A has mystery
Internal personnel have caused players to contradict? Netease "Yin Yang Shi": Impossible!
The first pop -up shop in the United States opened, Bubble Mart opened the North American expansion plan
The goose factory is finally making a move on the metasverse?
With this charging treasure that can legal "stealing electricity", I don’t worry about the mobile phone out of power
Tesla has lost nearly $600 million after the richest Chinese lost 89% of his net worth in the bitcoin crash
Son's bet that ARM's listing will boost SoftBank's stock price?
The most popular news this week
The U.S. Supreme Court abolished abortion rights and caused uproar and big waves of technology leaders to oppose them
Ali Sports changed its name to Orange Lion Sports, and stadium operation became its key business
Alisports responded to the change of name of "Orange Lion Sports" : "The situation is true and the change process is in progress
Physical plug -in! Huawei Nova 10 is expected to be equipped with 5G mobile phone case
Huawei's new phone outlook: Snapdragon Chip image enhancement is huge
Qinling Yang's figurine found fingerprint marks netizens directly called strong: experts revealed the secrets
Intel custom special EDITION DDR5 12 Generation Core memory overcaged by 61.7MHz
U disk artifact upgrade Crack Microsoft Win11 22H2 forced requirements
SMIC: firmly supports the domestic chip industry chain
Small screen flagship and Android 13: In the future, it can still be promoted to Android 16