On the forenoon of May 8th, Alipay official micro-blog posted a recruitment poster to open up technical personnel. As you can see from the poster,In addition to serving a lot of technology and other technologies, it also revealed the current composition of Alipay, the proportion of Alipay technicians has exceeded 63%, that is to say, 5 of Alipay's 5 employees are programmers. 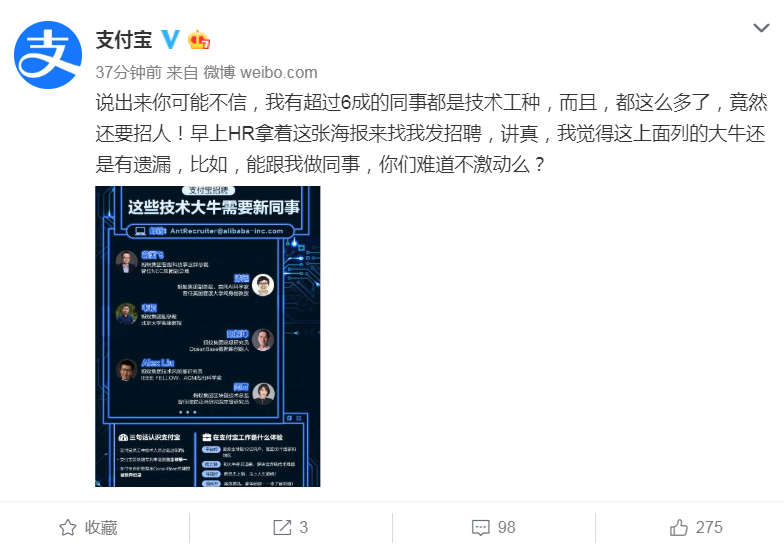 Interestingly, Alibaba has always paid more attention to the investment in basic technology and innovative technology. According to a previous statistics, Alibaba ranks first in the proportion of R & D personnel of world-renowned technology companies,Alibaba is also the only company on the list with more than 50% employees, even Google and Microsoft are behind it,But now, Alibaba is also behind Alipay.

In addition, Alipay said in the recruitment poster.At present, the number of patent applications in Alipay block chain is the first in the world. Alipay's self research database OceanBase performance has broken the world record.

It is understood that the ant block chain is currently the main business side of the whole Alibaba economic block chain. As of April this year, the total number of patent applications in Alipay block chain has reached 2344, and has continued to rank first in the world, and more than 2 or 3 total. In October last year, Alipay won the database world cup laurel from its research database OceanBase, with its peak 60 million 880 thousand times per second. 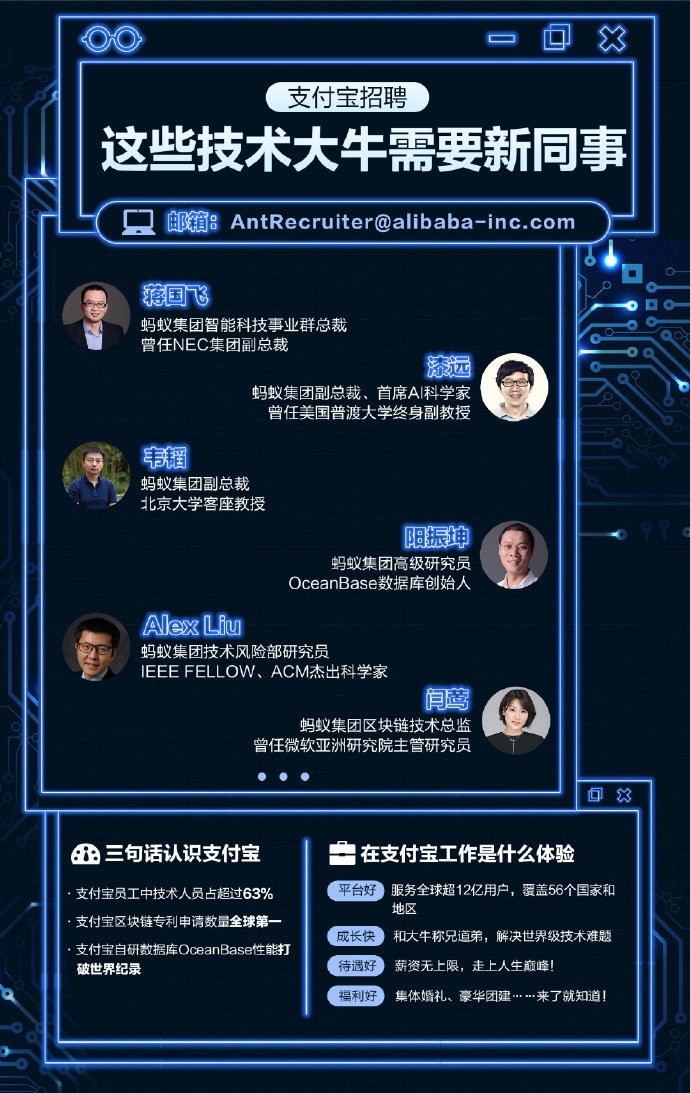 Related news
Since the outbreak, 1 million 640 thousand people have been hungry for flexible employment through Alipay, and riders have increased by 142 thousand.
Technical post over 60%! Alipay open recruitment: no upper limit salary for brother and brothe
8 million 740 thousand in the history of the most recent graduates, Alipay's "job search" volume increased by 10 times.
Hot news this week
Wechat has not done this function for N years! Use this app to make up for the defects of wechat
Gree's response to "being disqualified from winning the bid": a mistake made by the bidder in sorting out the materials
IPhone 12: it's more like throwing away the charger
Microsoft official free data recovery tool windows file recovery experience
NASA's face touching Necklace: vibration warning to prevent the spread of new coronavirus
Apple wants to know: what do you do with the charging head of the old iPhone?
Amazon cancels disposable plastic products in India
How long can "Laoganma" carry on after winning Tencent?
Tencent magic change Yang surpasses video self mockery: I'm a simple and honest fake spicy sauce lost 16 million
Windows file recovery tool on Microsoft Store
The most popular news this week
Linus Torvalds, father of Linux: I didn't program for a long time. My job is to say no
Android version of the Firefox browser to remove the preview version to solve the confusion of the version number
The severity of the epidemic in the United States is greatly underestimated, or the actual number of infected people is 10 to 24 times higher than the existing data
China's Tesla owners humble Rights: fully automatic driving nearly killed! The muck truck merged the line, and even accelerated to hit it
HP spectre folio experience: leather and limited, trying to get rid of homogeneous laptops
"Operation Wizard" has pushed 5.9 monthly fee members, 88vip and Jingdong plus members have something to say
Microsoft's new windows Preview: push new fluent start menu
TSMC 5nm was snatched by Huawei and apple this year
India's telecommunications minister said it had decided to move Huawei out of the country's 5g network construction plan
Huawei mobile phone new patent exposure: camera equipped with "SLR Lens"