Look carefully at Alibaba's and pinduoduo's financial statements, and there are shadows of each other everywhere

For the first time, pinduo and Alibaba, the happy enemies, released their financial statements on the same day. When we look at these two financial statements carefully, we find that the most important information related to e-commerce is everywhere the shadow of each other.

Affected by the new crown pneumonia epidemic, Alibaba's operating profit for the quarter was 7.131 billion yuan, down 19 percent from a year earlier; operating profit margin fell from 9 percent to 6 percent. Adjusted EBITDA( non-GAAP financial indicators) increased by 1 per cent to RMB 25,440 million from the same period last year.

Alibaba's China retail business revenue this quarter was 70.9 billion yuan, up 21% from a year earlier. Among them, customer management income increased only 3% year-on-year, commission income decreased 2% year-on-year. Alibaba said in its earnings report that the increase in customer management revenue was mainly due to the growth of information flow and Taobao live income, partly offset by the impact of the new crown pneumonia epidemic, resulting in the number of hits realized in search and the decline in the average unit price of a single click. 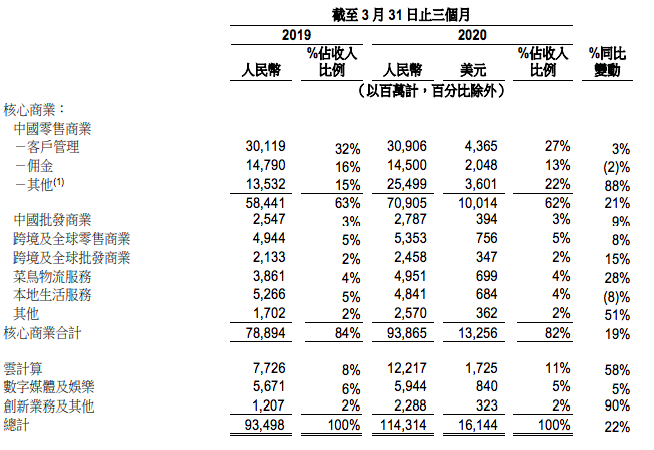 So what makes Alibaba define what was once Ma Yun

And at present, its order of magnitude contrast is still conducive to Alibaba. Of course, the premise is to combine Taobao and Tmall to show together. As a result, data on Amoy's merger are largely out GMV 2016, more often

However, if we pay attention to the growth rate, it is another picture. According to the financial report, in the fiscal year 2020, the Gmv of tmall online physical goods (excluding unpaid orders) increased by 23% year-on-year (this is the way Alibaba used to publish Gmv in the past, most of the time only one growth rate data of tmall). The year-on-year growth rate of Gmv of pinduoduo as of March 31 was as high as 108%.

In addition, some other data also see the impact of pinduoduo shadow. For example, this quarter Tmall online physical goods GMV growth at the same time, commission revenue fell 2% year on year. Financial reports attribute this to free measures under the epidemic, as well as weak sales of high items. But combining pinduoduo has always been more important for businesses

The trade-off game between gain and loss

On pinduoduo's side, it's natural that its users are growing. Because this is also the market evaluation it breaks through Alibaba's blocking its most critical data. And support its tens of billions

This quarter is still bright. In the first 12 months to March 31,2020, Pinduoduo had 628 million annual active buyers. The number of active users has stepped on Alibaba's e-commerce business this yea

In the 12 months ended March 31, 2020, Alibaba announced 960 million global annual active consumers, including 726 million annual active consumers in China's retail market, including data from other businesses such as HEMA and Taobao tmall. Pinduoduo, which has been established for 5 years, is catching up with Alibaba e-commerce, which has been operating for 19 years.

From the perspective of single quarter growth rate, pinduoduo added 42.9 million users in this fiscal quarter, still maintaining a user growth rate of more than 40%; the net growth in a single quarter exceeded Alibaba's 15 million and JD's 25 million, becoming the largest number of new users in all e-commerce platforms in the same period. Pinduoduo quickly catches up, and the gap between its number of users and Alibaba's retail market in China has narrowed from 125 million in the last quarter to less than 100 million.

In the eyes of many market people and analysts, there is no shortage 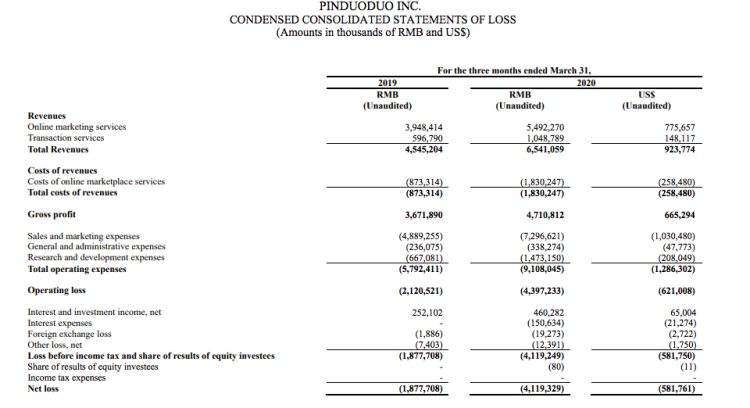 The way to maintain this growth rate is to fight for a lot of crazy subsidies.

This quarter, pinduoduo marketing costs continue to exceed revenue, net losses expanded significantly. The results showed that the losses were mainly due to sales promotion, subsidies and coupons

And unlike core data such as GMV、 users and revenues, which beat market expectations, this quarter pinduoduo suffered a much worse-than-expected loss from subsidies, and also compared with a year earlie

Pinduoduo said that there were two reasons for the loss expansion: on the one hand, during the epidemic, pinduoduo implemented zero Commission and reduced the marketing costs of businesses on the platform; on the other hand, pinduoduo continued to increase its continuous investment in direct subsidies for technology, products and commodities.

We have analyzed pinduoduo's subsidy logic many times. The crazy subsidy is because it wants to build consumers' trust in platform products, and it can't follow Alibaba's old way. When Taobao encountered a trust crisis, Alibaba directly introduced flagship stores of major brands into the platform through the establishment of tmall mall, and provided authentic guarantee to gain trust. Pinduoduo, as a latecomer, is obviously unable to completely reproduce this route in the face of Alibaba, which has been deeply bound with brand businesses.

So in mid-2019, pinduoduo launched

Therefore, loss and Gmv and user growth, in the final analysis, is a strategic game of cost-benefit balance. At present, in order to attract merchants, the monetization rate continues to decline under the condition of not making profits. On the other hand, the number of users is more than 600 million, the growth rate is maintained at more than 40% and Gmv doubled. Everyone will have different judgments, and pinduoduo obviously thinks it's worth it.