Atom is rarely mentioned nowadays, but it has been active in the field of low power consumption, and its products use two classic brands, Pentium and Celeron. According to the road map,Intel has planned two low-power new products, Elkhart lake and Jasper lake. Now the former has been sold by Chinese manufacturers.

No surprise, Elkhart lake and Jasper lake will adopt the new Tremont CPU architecture and 11th generation core display architecture. The latter has officially confirmed that it is a 10nm process and will be released this year.

The former was never mentioned officially,At first, it was thought to be 10nm, but later it was still 14nm, just like the relationship between 14nm comet lake-u and 10nm ice lake-u on thin and light books, it can provide more cores and higher frequencies as a supplement in case of insufficient performance of 10nm process. 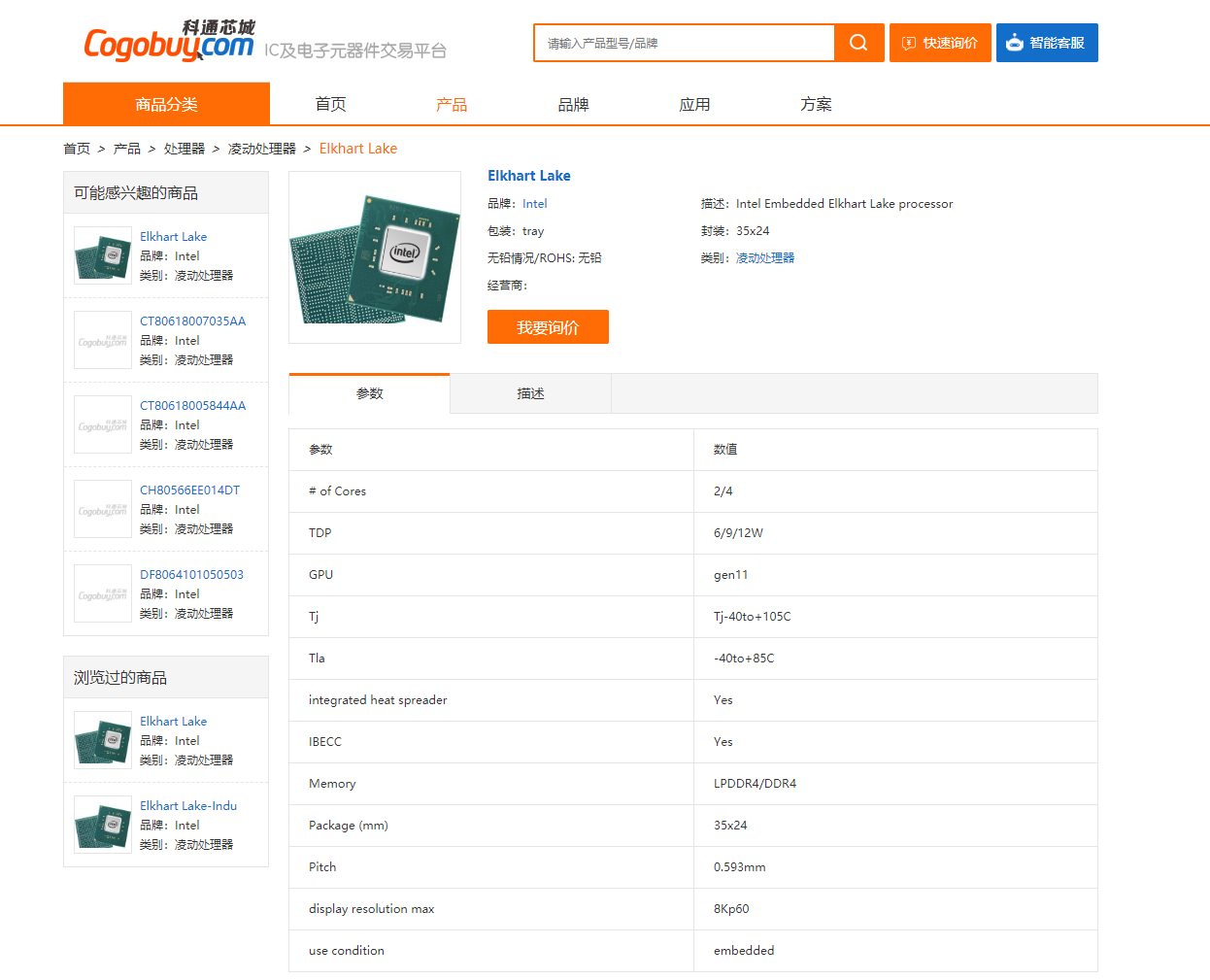 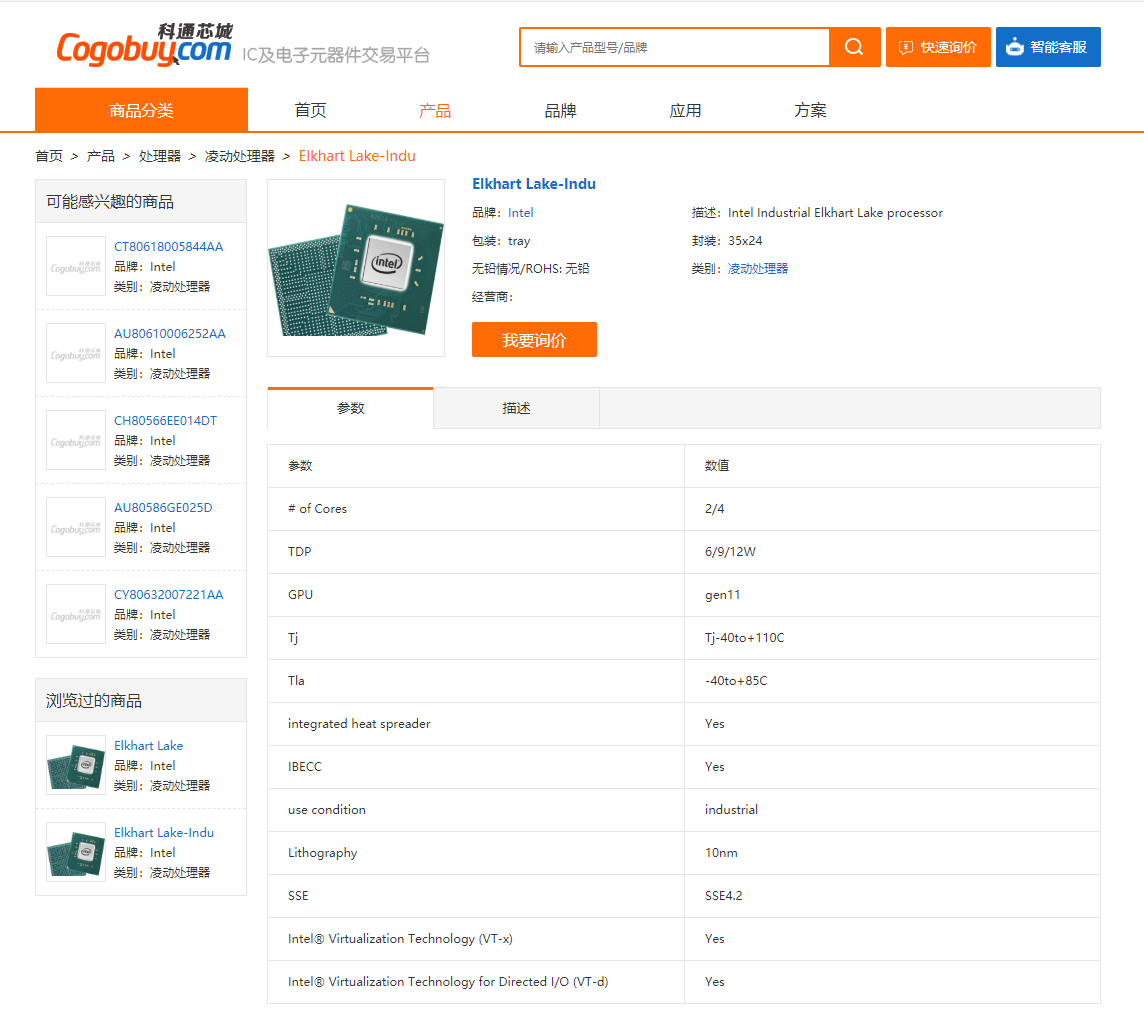 Elkhart Lake processor has been openly sold on the IC and electronic components trading platform Ketong core city,Manufacturing process is marked with 10nmIn this way, it's quite confusing. Although it doesn't rule out the possibility of merchants' labeling errors, other parameters are different.

According to the introduction,Elkhart Lake processor, as an entry-level low-power product, does adopt the Tremont CPU architecture, the 11th generation core display, and supports up to three screens of output, you can use three HDMI or three DisplayPort. With DisplayPort re timer, you can have a high resolution of 8K / 30Hz and 5K / 60Hz at the latest.

It can also be divided into two versions, embedded and industrial. The main difference is that the maximum withstand ambient temperature of the former is 105 ℃, the latter is 110 ℃, and the minimum is - 40 ℃.

Related news
NVIDIA: has no intention of competing with Intel for the CPU market
AMD Zen2 laughs as Intel's new 10 core CPU power explodes
Amd "girlfriend" GF or take Intel order to OEM 14nm low-end CPU
Intel and AMD's future CPU roadmap summarizes the market of wind and cloud transformation and smoothly promotes the new architecture
Intel's next generation low power CPU appears in the Chinese market: 10nm? 14nm？
Hot news this week
Samsung and research team found a new semiconductor material: amorphous boron nitride (a-bn)
What does Huawei mean to Chinese semiconductor?
Attack Tencent hinterland byte jump start long video Secret War
The Facebook Regulatory Committee, which came into operation this fall, could overturn Zuckerberg's decision
Amd releases driver update for radon 20.7.1 to introduce new error reporting tool
Oxford University expert: the new coronavirus has been sleeping all over the world, not originated in China
Microsoft stops win10 update in May: for users using storage pool function
Huawei: 5g hardware not affected by White House sanctions can be supplied to the UK in the next five years
Successful development of new coronal vaccine in the United States? The subjects said they had antibodies: they were vaccinated two months ago
"Shandong Xiaomi Finance" lost Lu Weibing praise legal team: recently very powerful
The most popular news this week
Amazon ordered tiktok to be banned for seconds: hand skating?
The light of domestic products! BYD's customized version of Huawei P40 released
Galaxy S21 internal code, hardware details exposure price configuration may both decrease
A device called LG K31 is exposed: or will it be released in the next few weeks
Asian media say Samsung Galaxy Note 20 may actually be cheaper than expected
HMD plans to launch Nokia 2.4, also known as wolverine, equipped with eight core Helio P22 processor
ROG game mobile phone 3 is certified :6000 mAh battery with 30 W fast charge
has submitted a submission to the US side! Can TSMC and Qualcomm resume supply to Huawei?
"Reprisals" by the United States against France in the digital tax dispute, Expert: limited impact
Raise the price as much as you can! NVIDIA RTX 20 series production stopped