Recently, wetool, a third-party wechat community operation tool, was suddenly banned by the wechat envelope, resulting in a large number of wechat accounts using the tool being sealed together, causing hot discussion.

Later, Liu ruiyong, the founder of wetool, called on everyone to withdraw from wetool and stop using it. Meanwhile, he was communicating with wechat official, but respected the official decision.

Wetool also stressed that as the auxiliary software of wechat in computer version, the original intention is to reduce the cumbersome manual operation of operators in the work scene and help large enterprises to serve fans more efficiently. Since its release, it has been loved by operators with few comments. 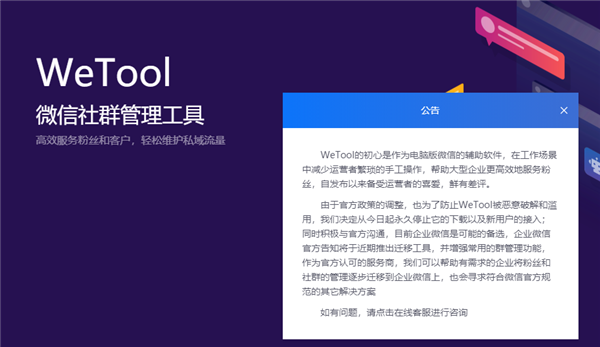 At the same time, wechat calls on users not to use such plug-in services, and not to give their wechat account, password, verification code and other information to strangers, so as to avoid multiple risks such as privacy and property security.

As a wechat community management tool, wetool has auxiliary functions such as group message sending, keyword group pulling, robot response, group statistics, etc. it is a necessary artifact for managers with large number of users such as online education, e-commerce online shopping, etc., which can greatly improve the operation efficiency.

Related news
Wechat Team Strikes Strictly on Wechat External Xposed: Illegality and Violation
The number of monthly accounts of Tencent WeChat and WeChat has reached 1,132.7 million: a year-on-year increase of 7%
Tencent blocked the third-party wechat tool in a large scale. Using wetool will be blocked
Should wechat kill wetool?
First public response by WeTool and WeChat
Wechat official response: kill wetool: disrupt normal operation and harass normal users
Should wechat kill wetool?
Wetool team and wechat respond to the sealed event for the first time
Hot news this week
Wechat has not done this function for N years! Use this app to make up for the defects of wechat
Gree's response to "being disqualified from winning the bid": a mistake made by the bidder in sorting out the materials
IPhone 12: it's more like throwing away the charger
Microsoft official free data recovery tool windows file recovery experience
Apple wants to know: what do you do with the charging head of the old iPhone?
Tencent magic change Yang surpasses video self mockery: I'm a simple and honest fake spicy sauce lost 16 million
Luo Yonghao comments on ideal one: Tesla Model 3 is not a car of a level at all
A 400-brand evacuation Facebook： the internet giant strangled?
How long can "Laoganma" carry on after winning Tencent?
The dotcom bubble? U.S. technology stocks surpassed their 2000 highs relative to the S & P 500
The most popular news this week
Remote sensing data show that lakes in China have become clear as a whole
Glory Magic 3 coming? The blogger released photos suggesting that Huawei Kirin chip is still used
Microsoft transforms Android: customized for surface Duo
199 yuan millet router 4 pro on shelves Jingdong: dual Gigabit / 5 antenna
The first batch of "digital shopping centers" was launched on the line of Huarun, which moved the shopping center into Alipay.
Someone discovered the unpublished game of Nintendo NES 30 years ago and restored it from 21 floppy disks
Review of Sony PS2: the highest selling game console in history and the hot memory of post-80s / 90s
Xiaomi Youpin's first smart door crowdfunding: 10 Inch Touch Screen never power off
For global developers! Huawei HMS core 5.0 officially launched: seven capabilities, free
Lenovo announced the list of investment chip companies: BYD semiconductor, Cambrian, etc