Taobao responded that the user account was disabled in 980: too many refunds triggered the regulatory mechanism

On May 27, Ms. Zhang reported to the complaint platform of surging quality report that her Taobao account suddenly showed that she could not place an order in February this year. After contacting customer service, she was told that the account was banned for 980 years, while the 1950 yuan shopping card in tmall supermarket in the account could not be used or returned after being banned.

In response, on May 28, a staff member in charge of account management on Taobao platform replied that Ms. Zhang's account was banned because of too many refunds, which triggered the platform supervision mechanism. In the case of being banned, tmall supermarket's shopping card could not be used or returned. On the 29th, verified by Taobao, the ban on Ms. Zhang's account was lifted.

Ms. Zhang explained that she planned to open a home stay two years ago. She bought a large number of home appliances, furniture and other products on Taobao. She had refunded many times with the consent of the merchants, but there was no dispute. She didn't expect that she would be regarded as an abnormal account number by the system and automatically sealed.

For this account, Ms. Zhang has repeatedly communicated and negotiated with Taobao platform for more than three months.

Ms. Zhang said that on February 10 this year, when she was about to log in to Taobao to buy things, she suddenly found that her account could not normally place an order, and received a "violation details", which showed that her account was restricted from the buyer's rights due to abuse of member rights until 2999. After inquiring about Taobao's customer service, the other party told her that it meant that the account was blocked and could not be purchased. 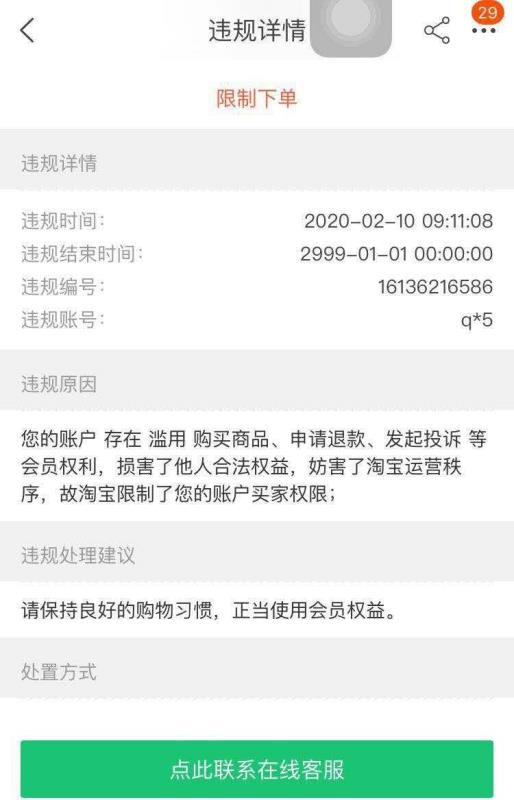 However, as the amount of the shopping card is not recharged in Ms. Zhang's account, no refund can be processed.

Why was the account banned in 980? On May 28, surging journalists asked Taobao's after-sales specialist about this matter. After learning about the situation, he replied that Ms. Zhang's refund was too much and the system recognized that the account was abnormal.

In this regard, Ms. Zhang is also very aggrieved. She told Fanpai news that her Taobao account was registered in 2013, and in 2018, she purchased a large number of household appliances, furniture and other products in Taobao due to the planned home stay and house decoration. Because the house has not been decorated well and there are many uncertain factors, she will communicate with the seller to delay the delivery before each purchase. If the product is not needed, she will negotiate for a refund, which is agreed by the seller without any dispute.

"And I don't just buy back or not. I basically buy all the things I decorate on Taobao. During that time, the turnover was nearly 200000 yuan." Ms. Zhang said that after being sealed, she learned that according to the big data calculation of Taobao platform, frequent refunds would be regarded as account exceptions and automatically sealed. "I can understand this rule of the platform, but should I give a reminder to the user before sealing? If I had known before, I would have been more cautious about refunds. Or I do violate the rules and have to be banned, but at least I should return the money of the shopping card in my account, which is what I deserve. "

In response to the above situation, on May 28, a staff member in charge of account management on Taobao platform responded to the surging news that the platform did have big data monitoring, but Ms. Zhang's account was sealed not only because of refunds, but also because there were many received goods and only refunds in the account, "we are worried that after the buyer received the goods, we threatened the seller with bad comments to achieve the purpose of refunds, which is a lot, It triggers the monitoring mechanism to restrict the seller's purchase.

Under the coordination of surging journalists, Ms. Zhang also explained her multiple refunded transactions. She said that these transactions are all due to the discount rebate or defective products, and the merchants actively asked her to apply for refund compensation.

On the same day, surging journalists also contacted the customer service staff of tmall supermarket. The other side said that in the case of Taobao account being disabled, the shopping card in tmall supermarket could not be used and could not apply for refund. If the user has a request, he can appeal.

On May 29, after the verification of Taobao platform, Ms. Zhang's account was lifted. However, Taobao staff did not explain in detail the standards for account number sealing and lifting.

Related news
879 tons! Bulk double 11 commodity sinking with ship Taobao starts compensation refund
Nintendo confirmed that 160000 Nintendo accounts had been hacked
Women's account was sealed in 980 Taobao replied: too many refunds have been lifted
Taobao responded that the user account was disabled in 980: too many refunds triggered the regulatory mechanism
Hot news this week
has submitted a submission to the US side! Can TSMC and Qualcomm resume supply to Huawei?
Raise the price as much as you can! NVIDIA RTX 20 series production stopped
Alipay holds a university for small shops: all roadside shops and husband and wife shops can register for free.
NVIDIA RTX 20 production line to enjoy price increases
Huawei: 5g hardware not affected by White House sanctions can be supplied to the UK in the next five years
"Reprisals" by the United States against France in the digital tax dispute, Expert: limited impact
Why do investors think meituan pinduoduo has a bright future this year
No one in Xiaomi's legal department? I can't bear it this time. I told the Tianji network of Xiaomi TV
IResearch released mobile Internet traffic report, Youku ascended the growth list again
Linux Foundation recognizes that open source technology is not subject to U.S. export controls
The most popular news this week
Advanced security features of AMD epyc processor enable new Google cloud confidential Computing Series
Lu master Q2 graphics card ranking: AMD completely suppressed by NVIDIA
Former vice president of quality at Tesla
AMD will release Q2 quarterly financial report: zen2 is about to set a record, zen3 will take over in the second half of the year
Seagate releases a new generation of thunderbolt enterprise SSD: it is guaranteed for 5 years and can be written 10 times a day
Lu master Q2 graphics card ranking: AMD is completely suppressed
Us think tank: Twitter may face worse situation on election day
The European Union's Supreme Court rejected U.S. and European data transmission mechanisms and condemned U.S. surveillance
Seagate released a new generation of Thunder enterprise SSD： up to 15 T、 a day full write 10
USA's "hands on" EDA tools: solidifying security measures from the source