Luo Yonghao didn't march into the live broadcast market for a long time. Although there were many small problems in the middle, he definitely made great achievements. Now 618 is coming. Luo Yonghao announced a major event tonight. From May 31 to June 18, the iPhone, iPad, airpods pro and switch were sold at half price, which was nicknamed by netizens as starting to bring goods to the parent company Apple. 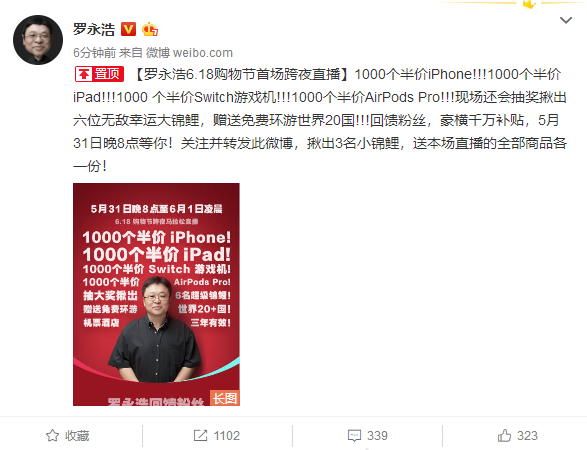 Of course, these four hot products are limited. From May 31 to 618, there are 1000 of them respectively. It depends on whose hand speed is fast.

In addition, six invincible lucky Koi will be selected from the spot lottery, and they will travel around the world for free.

Even if it's the microblog that publishes the news, Luo Yonghao will also draw a lottery, and the three lucky ones will present all the products of the day live on the night of May 31.

Related news
Don't expect too early on the folding screen iPhone and iPad
IPhone 11, what an embarrassment!
IPhone: too ugly and too heavy to use, try to buy Nuts.
Apple 2020 new product outlook: 5g iPhone / iPad / Apple watch series 6, etc
Luo Yonghao announces half price sale of iPhone / iPad. Net friend: bring goods for parent company
Luo Yonghao half-price iPhone SE was targeted by cattle: Xianyu price increase hawking
Hot news this week
Wechat has not done this function for N years! Use this app to make up for the defects of wechat
Gree's response to "being disqualified from winning the bid": a mistake made by the bidder in sorting out the materials
IPhone 12: it's more like throwing away the charger
Microsoft official free data recovery tool windows file recovery experience
Apple wants to know: what do you do with the charging head of the old iPhone?
Tencent magic change Yang surpasses video self mockery: I'm a simple and honest fake spicy sauce lost 16 million
Luo Yonghao comments on ideal one: Tesla Model 3 is not a car of a level at all
A 400-brand evacuation Facebook： the internet giant strangled?
How long can "Laoganma" carry on after winning Tencent?
The dotcom bubble? U.S. technology stocks surpassed their 2000 highs relative to the S & P 500
The most popular news this week
Dong Mingzhu, the first elder sister in the battle
What does Tencent do with game derived content authorization and commercialization innovation?
Remote sensing data show that lakes in China have become clear as a whole
Glory Magic 3 coming? The blogger released photos suggesting that Huawei Kirin chip is still used
Microsoft transforms Android: customized for surface Duo
199 yuan millet router 4 pro on shelves Jingdong: dual Gigabit / 5 antenna
The first batch of "digital shopping centers" was launched on the line of Huarun, which moved the shopping center into Alipay.
Someone discovered the unpublished game of Nintendo NES 30 years ago and restored it from 21 floppy disks
Review of Sony PS2: the highest selling game console in history and the hot memory of post-80s / 90s
Xiaomi Youpin's first smart door crowdfunding: 10 Inch Touch Screen never power off