Monopolist Google Chrome: once a dragon slayer, now it has become a dragon

Is desktop browser still important in 2020?

The answer is: important, and very important. After all, as long as you use the computer to get online, you can't avoid using the desktop browser. In fact, the browser is so indispensable that it is often ignored like the air.

Not only that, in the field of desktop browser, it is still full of smoke and waves, and it is still causing new concerns.

After all, the whole desktop browser field has basically become the world of Google Chrome. 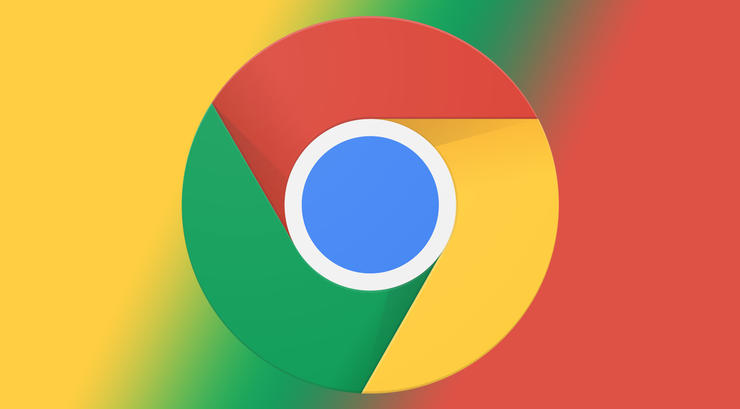 Google has dominated the desktop browser

Recently, according to the latest research data of netmarketshare, a market research institution, Google Chrome accounted for 69.81% of the global desktop browser market in May 2020, close to 70%.

This means that almost seven out of 10 computer users are using Google Chrome around the world.

Lei Feng net (official account: Lei Feng net) observed that the rest accounted for less than 5% of the three, even including the Safari browsers in apple macOS, accounting for only 3.9%.

It can be seen that Google Chrome has become the undisputed king in the field of desktop browser. 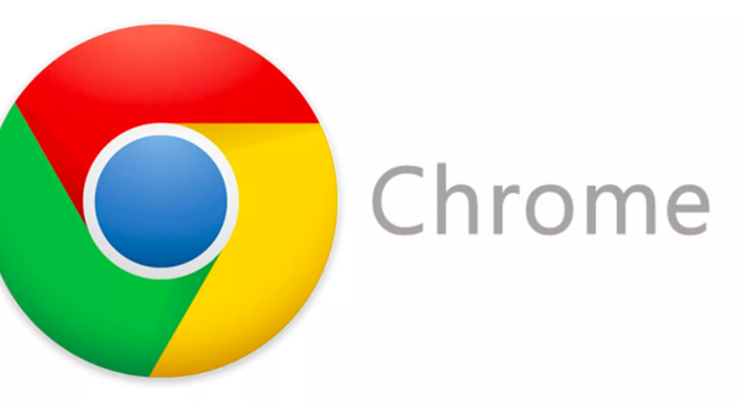 From this point of view, globally, the market share of desktop browser based on chromium kernel has exceeded 80%. What's more, chrome itself is Google led and open source to the world.

This means that the underlying technology and standards of the entire human desktop browser have been dominated by an American business company, Google.

This is undoubtedly a great honor for Google and an important support for its strong technical strength and influence.

This dragon is the IE browser that Microsoft once dominated the world for a time; it had a fierce browser war in the 1990s, and used various dishonorable means to gain dominance, one of which is the binding of Windows operating system.

So how brilliant was ie then? 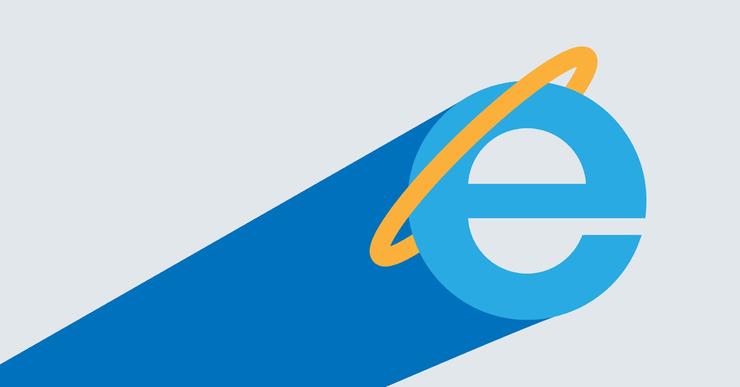 Later, under the impact of its own problems and competitors such as Firefox, ie's market share declined significantly. In the next four or five years, Firefox began to erode IE's market share, once more than 10%.

In 2008, when chrome began its public beta, Firefox's share remained between 15% and 20%, but ie still accounted for nearly 80%. Although it continued to decline, it was still dominant.

At this time, Google Chrome came out, and became the real enemy of IE.

At first, within Google, the development of browser was opposed by Eric Schmidt, then Google CEO, but he finally followed the suggestions of Larry Page and Sergey Brin, two founders of Google.

It is worth mentioning that the development of Chrome browser in those days was led by Sundar Pichai, CEO of alphabet and Google. 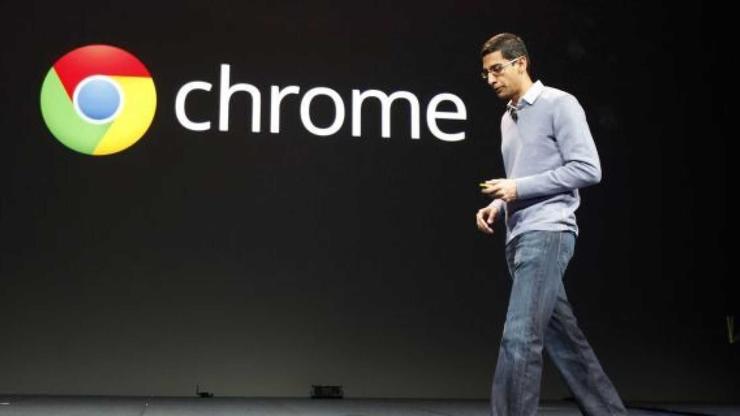 But soon, chrome showed the strength to challenge its rivals.

But one of the most prominent roles is Google Chrome. 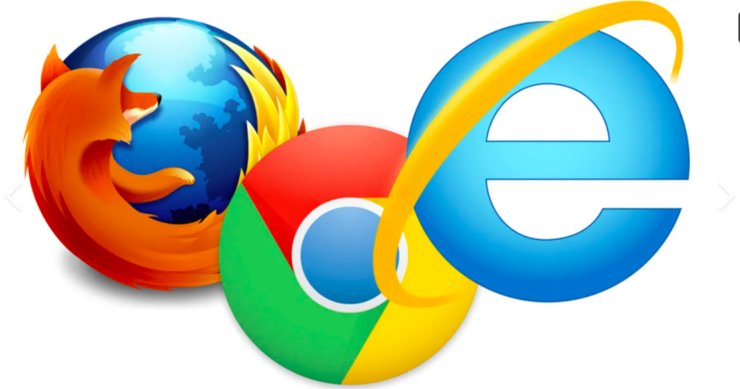 From today's perspective, chrome is almost a reinvent of the browser; many of the current web browser's human features are almost from chrome.

What's more, Google has also designed an extremely effective development mode while maintaining the fast iteration speed. It divides chrome into stable version and development version. The former is used to meet ordinary users, and the latter is convenient for developers to update and test functions, so as to meet the needs of different types of users.

At the end of 2010, more than two years after its launch, chrome captured 10% of the market share. At the same time, ie's market share continued to fall below 60%, while Firefox remained at around 20%.

Of course, both IE and Firefox are improving. They also learn from their competitors, especially Google Chrome, in many aspects. But Chrome is like a young runner, keeping up with and gradually surpassing their competitors in the process of rapid development.

But one of the more fortunate things about Chrome is that it has come across a wave of mobile Internet.

According to Lei Feng, chrome is lucky because behind it is Google, which owns Android.

From the end of 2010 to the beginning of 2016, it was the time when Android grew rapidly and dominated the mobile operating system. It was also the time when chrome took advantage of the trend. 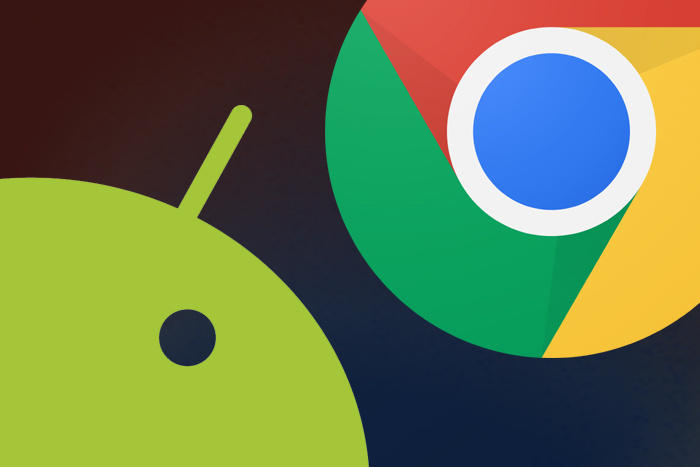 In this period of time, chrome's market share has steadily increased on the basis of the original, while Internet Explorer's market share has continued to decline steadily. As for Firefox, it has been hovering between 10% and 20%, and then it has shown a downward trend.

It's hard to specify how and to what extent the mobile Internet tide has affected the development of desktop browser market in the past five years, but Chrome is undoubtedly a huge beneficiary.

Simply put, chrome continues to attract more users with a unified experience across multiple terminals, including desktops, tablets and smartphones. However, Microsoft was seriously absent in the mobile Internet tide, ie was helpless, and in 2015, with the release of windows 10 and edge browser, it went to the edge.

Since then, chrome's market share growth has been smooth. 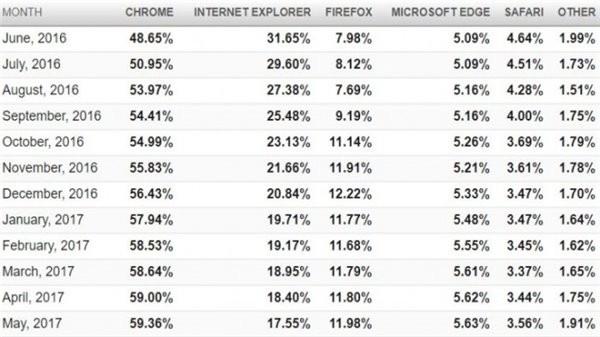 Over the next year or so, the chrome based edge browser was officially launched, with its market share slightly higher than before, but also in single digits.

Up to now, Google Chrome's market share is about nine times that of Microsoft edge.

The once Dragon Slayer is now a dragon.

With the end of the desktop browser war, probably no one will challenge Google Chrome's dominance in the field of desktop browser, but people will be worried. 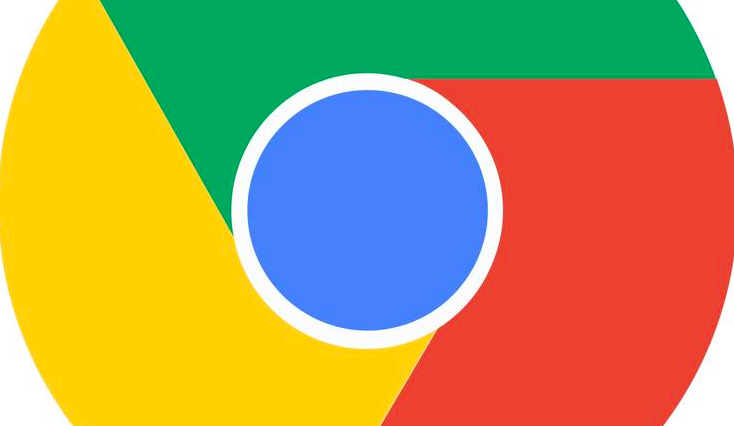 Mozilla also claims that it will fight for a truly open web through Firefox.

Alex Danco, the technology author, also believes that Chrome is a monopoly business owned by Google that should be spun off. It enables Google to influence the way all web pages are viewed, which is far beyond most people's awareness.

Chrome has quietly changed an important part of the way the web works. It is almost infinitely close to the real monopoly of technology, and this monopoly is not as far away as we think Google search ads are.

In Lei Feng's view, chrome is indeed a monopoly product, and under the existing Google product policy, it's hard to say whether it's a good thing or a bad thing.

In addition, Google has a special feature: it is a rare product under Google that can still download and use (although there are some castrations in function) in the Chinese market without any obstacles, and it also has a great advantage in market position. 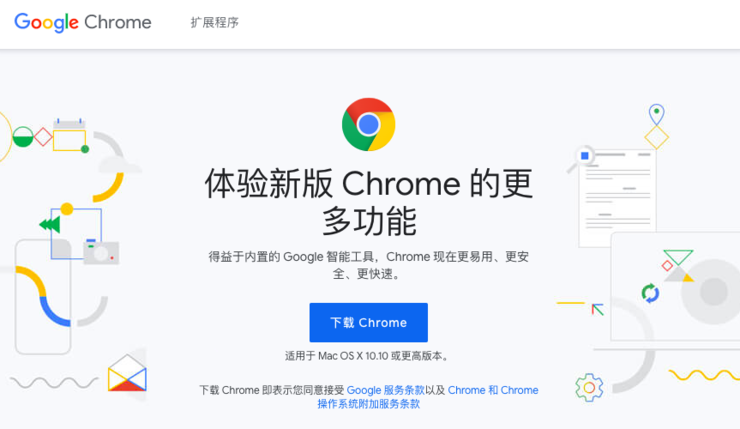 Given the long absence of Google's main business in the Chinese market, chrome is also a spectacle.

Do you think Google Chrome's monopoly is a good thing or a bad thing?

Related news
Google Chrome browser market share has a rare decline
Google Chrome Becomes the Gatekeeper of the Internet
Google Chrome won the title of browser of the year again in 2019
Monopolist Google Chrome: once a dragon slayer, now it has become a dragon
Hot news this week
Titanium Media Publish Assesum: People's Bank: Digital RMB Winter Olympics pilot has entered the sprint phase; Tesla announced that 250,000 Powerwall energy storage power stations have been installed
Close to the apple millet, two weeks of consecutive weeks, China Smartphone second: 3 years, the world's first
Alibaba and Tencent have received more than half of the 43 antitrust fines, and lawyers say the penalties are likely to increase
Study on the sequelae of COVID-19 in the Chinese team: Shortness of breath, depression and other problems still existed nearly one year after discharge
Capital does not love SAIC, "flying" subsidiary, Jet Hydrogen Technology intends to go to science and technology board
Huawei redefines one of the three major communication networks of the underground communication network
Tencent responded to "APP to get ridiculous": Upgrade APP is now downloaded for user rights protection
Gree announced the implementation of the double-holiday work system Dong Mingzhu from the media voice netizen God reply
The approval of Sensetime's IPO gives the metasurverse concept another ride
Netease Cloud Music will soon be listed on the back of 200 million monthly live users how to make money
The most popular news this week
Huawei Heavy Machinery is re-incorporated! Generators except logo exactly
Samsung PCIe 4.0 hard drive upgrade: more heat sinks fully support PS5
New crown latest variament has emerged in early November: New York, USA has a bad feeling
Black Friday us stores face embarrassing situation! Got stuck in the neck
Vehicle positioning signal weak puzzle! To be completely solved by Huawei
Apple resumed sales of the iPhone and iPad in the country after an emergency removal, with prices rising by 25%
In the first 10 months of the year, China's software business revenue increased 19.2%
Guangming Daily: Bid farewell to disorderly competition, platform economic development to tighten the bottom line
Can WeChat transfer borrowed money?
Sources say Huawei has begun mass production of a generation of foldable phone price surprise