Fast technology learned that on June 8, ant group announced that it would independently operate oceanbase, a self-developed database product, and set up Beijing Aoxing bass technology, a database company controlled by ant 100%. Hu Xiaoming, CEO of ant group, was the chairman of the board.

This move marks that ant's star technology product is on the track of large-scale commercialization, and also promotes distributed database, the top self-developed technology in China, to enter a new stage of development.

It is understood that the new company will release a major version upgrade within this year, adding analytical business processing capacity based on the original functions, and oceanbase will be upgraded to an enterprise level distributed database supporting HTAP mixed load. Oceanbase also announced that it will serve more than 10000 corporate customers in the world in the next three years. 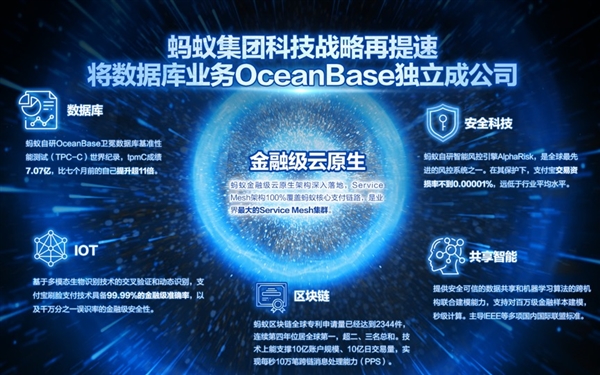 OceanBase is the world's leading database product. In 2019, known as

The success of oceanbase is the result of ant group's technology investment for ten years. It has subverted the traditional centralized database technology architecture, innovated and adopted a new generation of distributed processing technology, and maintained the leading position in the database technology direction and realized full independent research and development. Oceanbase's technical maturity and leadership lay the foundation for its market and large-scale commercialization. 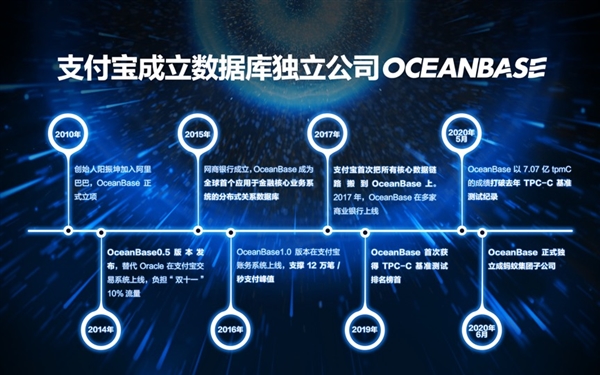 In the Ali economy, OceanBase has been supporting Alipay, Internet banking and other important businesses for many years. After Ali's super scale business scenario, Alipay's financial scene and the experience of double 11 battle, OceanBase has long been a mature commercial product tested by complex businesses.

Oceanbase's technical services have also been exported since 2017. In the domestic financial field, its commercialization degree has been deepening; in the fields of transportation, railway, aerospace, etc., it has also appeared. Compared with the traditional database, oceanbase achieves the multi-center and multi regional disaster tolerance capacity with lower cost, meets the strict requirements of the digital era for the service to be online forever, and adapts to the expanding data processing demand in the Internet era with stronger performance, with a bright market prospect. The establishment of a company alone means the maturity of its business model and the upgrading of its business position within ant group.

It is ant group's strategy to test and mature innovative technology in its own business before opening to the outside world. Previously, in the financial cloud, artificial intelligence, blockchain and other technical fields, ants adopted the same strategy to export technical services.

Data shows that ant group currently has the highest proportion of R & D talents (63%) and the largest number of blockchain patents (2344).

Related news
China's self study database wins the World Cup performance exceeding Oracle 100%
Is the Ali database really better than Oracle?
The death of commercial database: Oracle facing difficulties
11 times more! Alipay self-developed database OceanBase once again set the world record
707 million! Alipay OceanBase freeze database world cup latest record
OceanBase refresh world record, Alipay rushes into "no man's land" again
Break Oracle Monopoly! Alipay OceanBase independence: major version upgrade will be released during the year.
Distributed database OceanBase announced 4.0 product release, single -machine deployment performance is super mysql
Hot news this week
A small plane in the US has crashed into a 30-metre high voltage power line and got stuck: 80,000 people affected
Can recording others' wechat chat records be used as evidence? The Beijing Internet Court has an answer
Alibaba launched a new cross-border e-commerce platform in Spain, aiming to operate independently in the middle and high-end market
It's not just Huawei! Beidou has penetrated more than 20 industries and applied more than 15.5 million products
When pure water is used in China team to solve the problem of seawater hydrogen production: it is expected to become an original industry
A Tesla crashed into two cars in Taizhou, Zhejiang province, killing two and injuring one, police said
Breaking the spell of "Android 3 year must card", the new Breguet mobile phone will be sold for the first time tomorrow: from RMB3499
The appearance of Xiaomi's mini console is revealed for the first time: an all-metal body with a strong apple smell
Be careful with your phone for a long time! The aunt played with her mobile phone so much that her fingers got stuck
Google's Project Zero team accuses vendors of slacking after ARM GPU bug exposes Android upgrade woes
The most popular news this week
Why is the Apple Pencil 2 not supported? iFixit takes apart the iPad 10 to find out
Zte's experience proves that there is no way out of appeasement and peace can only be fought out
China's growing presence in the global high-tech sector is unacceptable to the US
Us to investigate Lapsus$hack, Microsoft, Nvidia and others were breached
From January to October this year, the number of global travel app downloads approached 2 billion, with China's Amap, Baidu Map and Railway 12306 taking the top three places
With the acquisition of Pulse, Mozilla will develop a new approach to machine learning
Did the United States achieve its goal? More than 40 suppliers went to the United States with TSMC
Microsoft may not be able to offer its Microsoft 365 service in German schools after two years of efforts failed
A record $50 million in compensation! In the final judgment of the dispute over the infringement of Minecraft by Mini-World, NetEase won the lawsuit
Manufacturers like Samsung and Xiaomi have been affected. Google has revealed a dangerous flaw that threatens millions of Android devices