At present, Microsoft has "gradually" promoted the deployment of windows 10 may 2020 (20h1 / version 2004) ԡ function update, but some devices are not upgraded due to many problems such as driver, compatibility, etc. Microsoft has confirmed the list of tested and upgradeable devices with PC manufacturers such as Dell and Lenovo,But in social media and Microsoft's support community, there are still some problems that have not been recorded. 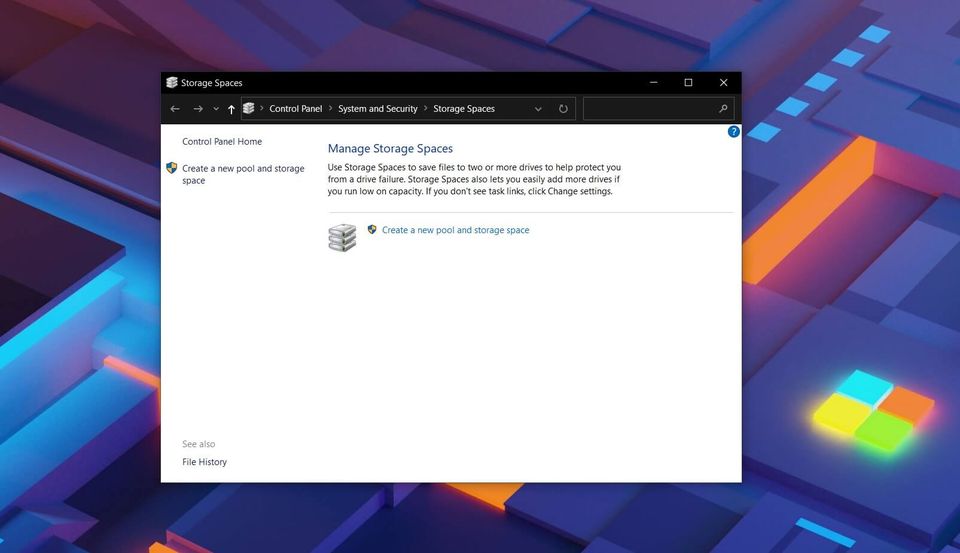 However, users reported that storage spaces did not work properly after upgrading windows 10 version 2004. Multiple users fed back on the feedback hub that they could not create a new storage space and displayed "cannot create new storage space. Error (0x00000057): the parameter is incorrect.". Error code 0x00000057: incorrect parameter).

However, user feedback can be created on the same disk through tools such as PowerShell, which indicates that this problem only exists in the control panel interface.

My 20tb parity storage spaces are displayed as raw, and there are no files to access. The storage space tool and PowerShell show that it is healthy and contains data. It seems that the refs partition is damaged. I may have to pay for the recovery software and some external drives to copy the files so as to rebuild.

I started noticing last week the corruption tips I saved on parity storage spaces. However, there are no errors in CHKDSK. Fortunately, I've been able to recover images from the backup and the corrupted version hasn't synced back to onedrive.

When the windows 10 may 2020 feature update starts, the drive optimizer tool no longer records the date of the last manual or automatic scan, which may cause other problems. For example, the tool warns you that your driver is not optimized and you need to run a scan, but the tool is still doing its job.

Related news
Microsoft will block Windows 10 May 2019 updates for these devices
Three ways to upgrade Windows 10 May 2019
Windows 10May 2020 information summary: release time, new features, etc .(figure)
Windows 10 may 2020 is expected to meet you next week (Figure)
Get ready: Microsoft starts to push windows 10 may 2020 updates "step by step" this week
Windows 10 may 2020 ready to launch: inventory of major new features (Figure)
Windows 10 may 2020 removal features list: windows to go, Cortana consumption level skills, etc
Tip: how to uninstall Cortana voice assistant for windows 10 may 2020
Windows 10 may 2020 new bug: unable to create new storage spaces (Figure)
Windows 10 storage sense
Hot news this week
Too many questions! Apple has changed the timing of the official release of iOS 16 series
Monkey acne cases have ranked first in the world that the United States has announced the emergency state of public health
Tencent and Logitech cooperation of the cloud game console Revelations: equipped with Android system configuration is low
Credit card points rule intensive adjustment online transaction points more "valuable"
High reserves and low cost experts: calcium ion batteries replace lithium batteries to stand up to the daily
Alibaba executives interpret financial results: the focus of the consumer side is no longer to attract new, but to do a good job in stratified operation
Losses in a single quarter of $ 23.4 billion a record, SoftBank did not carry the plunge of technology stocks and the devaluation of the yen
Sources say Samsung's Galaxy Z Fold4 is going up in price: a 512GB top unit will cost more than 13,000
The prevention and control of the American Monkey epidemic has failed. What should I pay attention to?
Is the micro -business headache? WeChat friends are suspected to have a big move: 7 can only be posted a week
The most popular news this week
After selling Tesla for $6.9 billion, Musk said he was not selling it, but a survey said he was still selling it. The title of the world's richest man may not be guaranteed next ye...
Distributed database OceanBase announced 4.0 product release, single -machine deployment performance is super mysql
The three major indexes of the US stocks opened sharply: ROBLOX fell more than 4%, Twitter and Tesla rose more than 3%
Japan has confirmed that China has overtaken the US for the first time in the world's top three indicators of scientific papers
A wake-up call for Apple? Foxconn says it is feeling the sting of slowing demand for smartphones
Joining Chip Alliance could serve as bridge, says South Korean Foreign Minister
Joe Biden also mentioned Chiplet? An unexpected A-share buzzword in A White House briefing
Nio Li Bin responds to mobile business rumors: This should be the definition of other people's imagination to us
Amazon is pushing a feature called "swipe to pay" that scans your palm to pay in seconds
Text message color, picture quality compression! Google calls out Apple for improving cross-device messaging