Speed! Official confirmation: MIUI 12 based on Android 11 will be released soon

Then,According to Zhang Guoquan, director of Xiaomi's mobile phone system software department, on Weibo, MIUI 12 based on Android 11 will also be released soon.At present, it is not clear what updates the new system will bring. 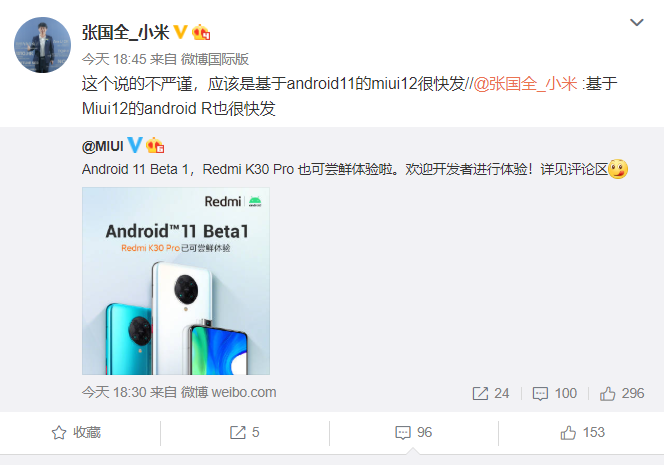 Previously, MIUI 12 stable version (Android 10) has been targeted at Xiaomi 10 and Xiaomi 10 pro. In addition, as many as 32 models have been adapted to MIUI 12 development version.

Animation, MIUI 12 has completed a completely new and extremely advanced technology architecture from the beginning of self-research and reconstruction of the underlying technology , including animation engine, rendering engine, illustration engine, gist

The super wallpaper function opens the rest screen, lock screen and desktop wallpaper to achieve a seamless transition. For this reason, Xiaomi rebuilt the real Mars, earth and other models, and made them into dynamic wallpaper. After turning on the dark mode, the planet will enter the night.

Security and privacy MIUI 12 the world's first T through Rhine, GermanyThe former can record the application behavior faithfully and report all sensitive behaviors to users. When the application uses the camera, recording and positioning authority, it will give obvious prompt and control.

The intercepting network function further standardizes the app permission, completely forbids the background to use the camera and wake up in the background. When the app gets permission, you can choose to allow only in use or this time.

In terms of multi task, it supports global free window and adapts to a variety of use scenarios. When a message is received, it can slide gently to enter the small window mode, and then slide upward to exit. It is said to be the best mobile multi task solution in the world.

Based on the self-developed soul string algorithm, Xiaomi mobile phone can intelligently perceive the motion state of AIBesides Google, it is the only mainstream mobile phone brand that can do this. The mobile phone can automatically record walking, running, riding and climbing stairs all day in its pocket, and the power consumption is less than 1%. When placed beside the pillow, it can also simply record the sleep state, even snoring and dreamtalk.

Related news
Xiaomi MIUI 9 years old is fast! Warm up the MIUI 11 in advance, the tickets for the conference are ready
MIUI 12 evaluation: an upgrade that may bring the domestic Android system to a new height
Speed! Official confirmation: MIUI 12 based on Android 11 will be released soon
Android 11 customized MIUI 12 to Xiaomi 10/ POCO F2Pro internal test recruitment
Build stable version of MIUI 12 based on Android 11 official version
MIUI 13 exposure: second quarter release, millet 8, etc. or no upgrade
Xiaomi MIUI 13 exposure: interface refurbishment end of internal beta
Mi MIUI announced this week: MIUI 13 bugs have been fixed
Xiaomi MIUI major overhaul! Switching from the development version to the official version is easier
Hot news this week
China has found 35 known cases of the new zoonotic virus Langya
Losses in a single quarter of $ 23.4 billion a record, SoftBank did not carry the plunge of technology stocks and the devaluation of the yen
The prevention and control of the American Monkey epidemic has failed. What should I pay attention to?
Is the micro -business headache? WeChat friends are suspected to have a big move: 7 can only be posted a week
Kuaishou launched a self-developed cloud intelligent video processing chip: The chip has been streamed successfully
The new product of Xiaomi MIX is coming: both internal and external dual -screen has been upgraded to make up for the previous generation.
A new zoonotic virus, Langya, found in China has not yet been confirmed to be transmitted from person to person
Ministry of Public Security: Single telecommunications network fraud continues to cause 40 % of all electrical fraud cases
Special price "kill ripe"? Bike-sharing platforms have different prices for the same package for different users
A tech company in Shanghai has been fined 220,000 yuan for swiping orders to improve its ranking on Yelp
The most popular news this week
Executives' stole 'chip technology to set up a company and sold it to employers for 1 billion yuan
The total sales volume of PS4 may set 117.2 million units currently ranking fourth in sales machine sales
MacOS Ventura feature page removes third-party app 'Hide My Email'
Yuyuki Kobayashi joins NetEase game! He worked on Devil May Cry 4 and Resident Evil 4.
Cyber violence governance needs the concerted efforts of all sectors of society
WeChat releases a new specification for the public account avatar setting, and the official news reminder is prohibited
After the U.S. chip bill takes effect, the manufacturer's snatching subsidy war is even more intense
Thousands of flights in the United States are delayed or canceled: User collapse extreme weather is frequent
Off the shelves one after another! The Sogou search App followed in the footsteps of Sogou Map
Xiaomi MIX flagship top with price reduction: consistent with the price of 12S Ultra