A journalist who attended Trump's campaign rally in Oklahoma said his new coronavirus test was positive. According to Fox News, citing the newspaper Oklahoma Watch, the journalist named Paul Monice (Paul Monies), who received a notification on 26th that the virus was positive, and tweeted ," Friends, I'm also surprised that my new coronavirus test is positive. I haven't had any symptoms so far and feel good. I just called people I've been in contact with in the past 14 days to make sure they' re safe. 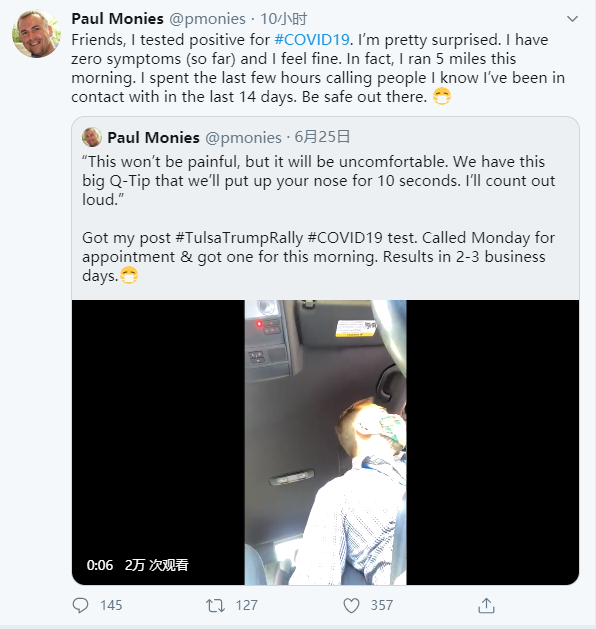 Monis said he wasn't sure if he had contracted the new coronavirus at Trump's Tulsa campaign rally, and has yet to track who he contracted it through. "I spent hours contacting all the people I had contact with indoors, as well as a few friends nearby. I felt it was my duty to tell them my test results."

The number of newly diagnosed cases of pneumonia in Tulsa is still increasing. Local time 24, Tulsa health officials said it is not yet determined whether the increase in the number of new coronavirus infections due to election rallies. "We'll keep an eye on the next six weeks because the incubation period ranges from 2 to 14 days ." Bruce Datt (Bruce Dart), Tulsa's director of health, said the virus could spread in the next few weeks through people exposed to the virus during rallies.

Although local health officials had expressed concern about the mass rally, the trump campaign held the rally as scheduled. According to local fire department statistics, less than 6200 people attended the rally, while the trump campaign initially claimed that 1 million people applied to participate.

At present, eight members of the trump team have tested positive for the new coronavirus before and after the Tulsa campaign rally. All members of the trump campaign team participating in the rally are required to be isolated at home. The campaign for Trump's re-election revealed that they had decided to implement quarantine measures to prevent further transmission of the new coronavirus to their families and others. (compiled by overseas website / Wei Xuewei / Shi Wei)

Related news
Wang Jianzhou, former chairman of China Mobile: sorry that the company is not listed in a share
China core international: China core from A-share reactor
Chinese core from A-share reactor
Why are Hong Kong stocks listed in Jingdong and Netease back to Hong Kong not a shares?
As many as 8.7 million people may be infected in the United States in March, more than 80% of them are undiagnosed, according to a new study
I URGENTLY NEED MY EX BACK WITH THE HELP OF A SPELL CASTER
Hot news this week
Nokia C3 evaluation: zhanruixin, native Android Qingliu
Tencent video will broadcast China Animation Gold Award "Long Song Xing" live version
Mobile payment war of seizing ant financial services and Tencent in Southeast Asia
QQ music vs Netease cloud, next battlefield in community
China Unicom launches plus membership: minimum 99 yuan / year, 12 VIP free choice
Baidu online disk landing on the science and technology innovation board, is it worth 40 billion? Probably
Burning money, bankruptcy, rebirth, listing China's new energy Corps makes cars
After a few months of HuaweiP40Pro use, the fruit powder nails were converted
"Boil to death" all rivals Baidu network disk and become a hot cake?
Samsung's last computer factory in China closed: about 850 people lost their jobs
The most popular news this week
Huawei confirmed: new flagship or Kirin chip to be released in September
In addition to 13 wafer factories TSMC actually has 4 advanced chip sealing plants
The U.S. Senate passed a bill banning federal employees from using tiktok on government equipment
Nano IPS panel LG 27 inch 4 K 144 1 ms Display on sale :$10999
Why stick to iPhone se
SpaceX successfully launched the 10th batch of Satellite Link Internet satellites, with a total of 595 satellites in orbit
"Lightweight" istio, Microsoft open source a service grid based on envoy
Open and hang must seal Tencent heavy fist hit "across the line of fire" external hang: equipment Yongfeng seal 10 years
Who is the first? Android mobile phone SOC performance list released in the first half of 2020
Special discount | steam's latest discount game Gamma The shadow of war Gamma "