The iPhone 12 is only available for beggars this year 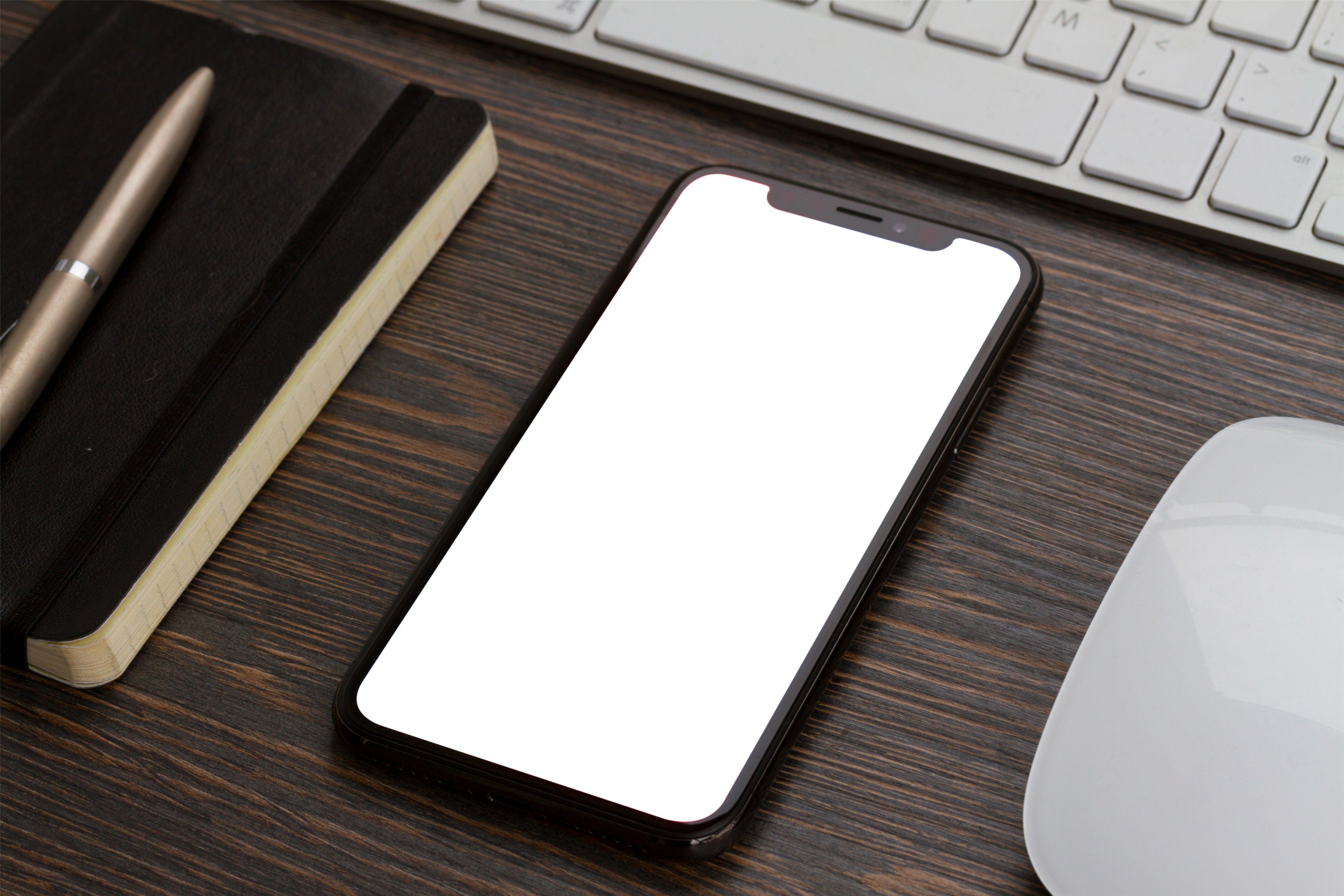 At present, the Internet about the iPhone 12 series news can be said to be endless. We have written a few related articles before, but recently a lot of new information has been released, and many questions have been answered.

This time, we can have a more comprehensive understanding of the iPhone 12 Series in advance. Let's take a look at it.

According to foreign media gizbot, Apple may officially release the iPhone 12 series before the end of September this year, if no accident.Apple is most likely to announce at least three models, and the iPhone 12 may be the cheapest.

To be sure, the iPhone 12 series will be equipped with A14 bionic chip, using TSMC's latest 5nm process. Compared with A13 bionic based on 7Nm, A14 bionic has lower power consumption and better performance.

According to the latest information from the supply chain, TSMC is producing A14 bionic chips, and the OEM will ship 80 million a 14 bionic chipsets. It is understood that these chipsets will support mmwave 5g technology.That means Apple could produce up to 80 million 5g iPhones by 2020. 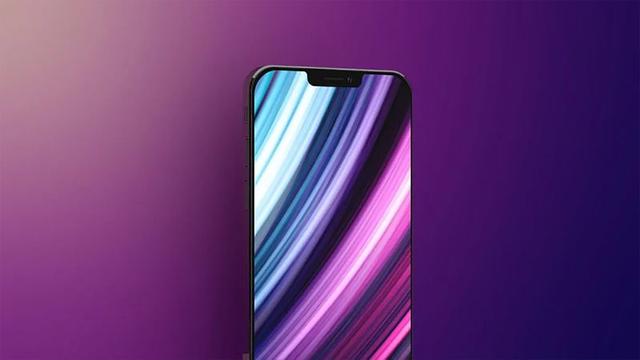 At present, a number of media reports said that the supply chain capacity with apple cooperation has been fully restored. In addition, according to the latest news from Taiwan media industry and commerce times, A14 chip has recently entered the stage of mass production, and TSMC's 5nm capacity in the fourth quarter has been fully contracted by apple.

Last year, on the eve of the release of the iPhone 11, Guo Mingji, an analyst at Tianfeng international, gave a forecast, saying that the iPhone 12 will ship 70-75 million units.

In this way, it is not impossible for apple to stock 80 million iPhones. Even if it does not reach 80 million, it will not be sold without shipping.

Recently, some foreign media have exposed all the specifications of the iPhone 12 series. As can be seen from the picture below, a lot of information is consistent with the above information, and the credibility is very high. 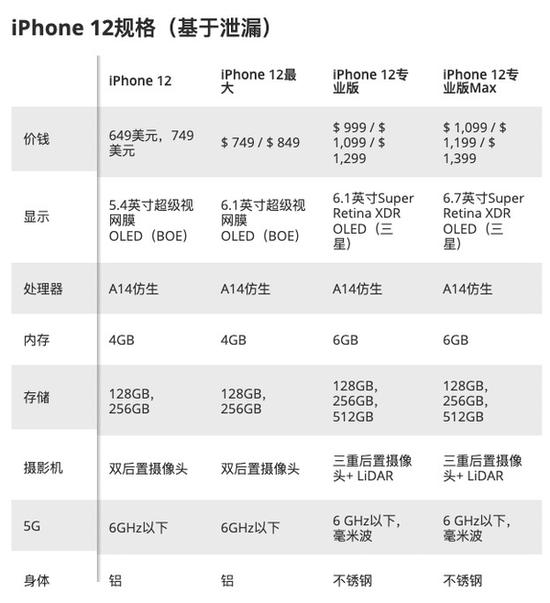 As for whether the iPhone 12 will use the BOE screen, it is not clear whether it will use it. Even if it does, Apple will not mention it in the press release and official website.

Compared with the iPhone 11, the iPhone 12 adds a max version with a larger screen size. The screen material is upgraded from LCD to OLED. At the same time, Apple has removed 64GB of storage and upgraded its processor from A13 to A14. Only sub-6 is supported in 5g band.

Compared with the previous generation, the storage of iPhone 12 pro and 12 Pro Max has been upgraded from 4GB to 6GB. The chip has also been replaced by A14, which supports 5g millimeter wave and sub-6. The lidar laser radar of this year's new iPad Pro has been added to the rear lens module.

There are five iPhone 12 models?

Recently, some foreign media released an iPhone screen roadmap that claimed to be an analysis agency. According to this picture, we can not only know the screen information of the iPhone 12 series, but also know the release plan of the new iPhone in 2021.

Exposure pictures show that Apple will release iPhone versions of 5.42 inches, 6.06 inches and 6.68 inches in the second half of 2020. This is basically consistent with the previous information. 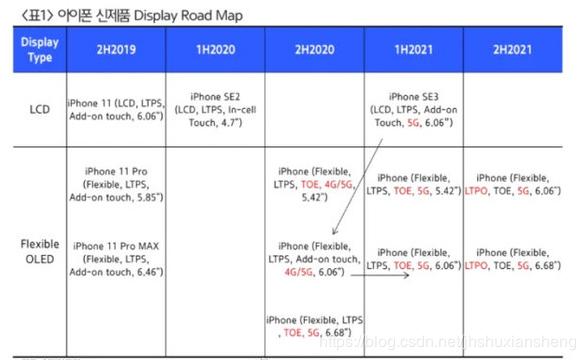 Previously, twitter user @ omegaleaks revealed that the iPhone 12 will launch a 4G version, priced at $549, equivalent to about 3890 yuan, which is $100 cheaper than the 5g version. In addition, the staff of the foundry also disclosed that there will be 4G and 5g versions of the iPhone 12.

This iPhone screen plan confirms the rumor that the iPhone 12 series will be released in batches.The release of the pro version of the iPhone 12 may be delayed until early 2021. Judging from the fact that the screen does not support ltpo, it can be inferred that by the second half of 2021, Apple will release the iPhone with high refresh rate screen.

The advantage of high refresh rate of mobile phone screen is that users can see more fluent pictures when they brush the information flow and play games. Although IOS animation is very smooth and the system is optimized well, the lack of high refresh rate will reduce the use experience of the product.

At present, the screen quality of the iPhone 12 series has improved, but it's a pity that it doesn't support high refresh rate. After all, some Android midrange computers use screens that support 120Hz refresh rate.

The second is the issue of storage. The size of the operation and storage is related to how many applications you can open in the background. The larger the storage, the more software the background can run at the same time. Today, Android flagship uses 16GB of maximum storage, but 4GB and 6G of iPhone 12 series are obviously not enough.

Compared with the iPhone 12, the iPhone 12 Pro has a higher screen quality, larger storage, a longer focal length for the rear lens, a lidar, and different materials for the body. From this point, it is not difficult to see that the hardware gap between the two is deliberately distinguished, and we have to admire the skill of Apple knife.

On the bright side, though, this year's iPhone may be able to scale up or even be cheaper than the previous generation. But it can't hide the fact that the iPhone 12 series lacks innovation, and apple is still eating its IOS ecosystem.

Related news
The History of the Development of the iPhone Camera
The History of the Development of the iPhone Camera
IPhone 2020: seven rumors about the iPhone 12 series
Talk about Apple's new iPhone se: "seeming to fit the gods" with iPhone 8
The iPhone 12 is only available for beggars this year
Ten year old fruit powder gave up buying iPhone 12: the reasons are as follows
iPhone 12" popular lover "or" tasteless food "?
IPhone 12 delay: winter is coming
Firefox Firefox 83 official release :15% increase in page loading into HTTPS-only mode
Hot news this week
Overseas sales of Chinese bicycles are crazy: nearly 16 billion yuan worth of exports have been ordered to the end of next year
IPhone 12 screen green: I choose not to forgive it
Lottery mode will be opened: it is reported that apple is looking for Samsung OEM M1 TSMC 5nm orders, accounting for only 25%
Only mobile phones can charge quickly? Huawei matebook X's dexterous and fast charging liberates your endurance anxiety
Panorama of China's AI chip financing in 2020
China Mobile Partner Conference is coming. It's so simple to start 5g life
Improve the efficiency of diagnosis and treatment, improve the experience of medical treatment Baidu health won the "2020 Best Health Platform Award "
The report says the world's largest producer of plastic waste is the United States: serious environmental damage
Flagship stores can't sell Shanzhai pinduoduo crazy bad money manufacturers are destroying the ecology
Xiaomi's "iron hoof"
The most popular news this week
Apple began to use its tiktok account to promote the iPhone 12 Mini
Huawei phone 256 GB full of space overnight: Tencent microvision ate
Samsung Galaxy S21 protection case to be released
Are the elderly abandoned by the Internet? Alipay: elders can try the "care version".
India's 4th ban on Chinese apps: 267 apps in total! Alipay didn't run away either.
Tesla's share price soared as Musk became second-richest man who blew up the material at the European Battery Conference
Cancer cancer vaccine may be coming: the United States has approved human trials
China Film Golden Rooster Award Opening of Xiamen Nov.27 with Huawei to launch the "New Image Mobile Film Project"
Relying on volume and ecommerce Xiaomi to return to third place in the world, it still wants to get rid of the middle and low end image
Using Tesla's same cobalt free cell, Yubo released 80000mah outdoor power supply