The undervalued eBay is quietly ushering in the golden age of value? 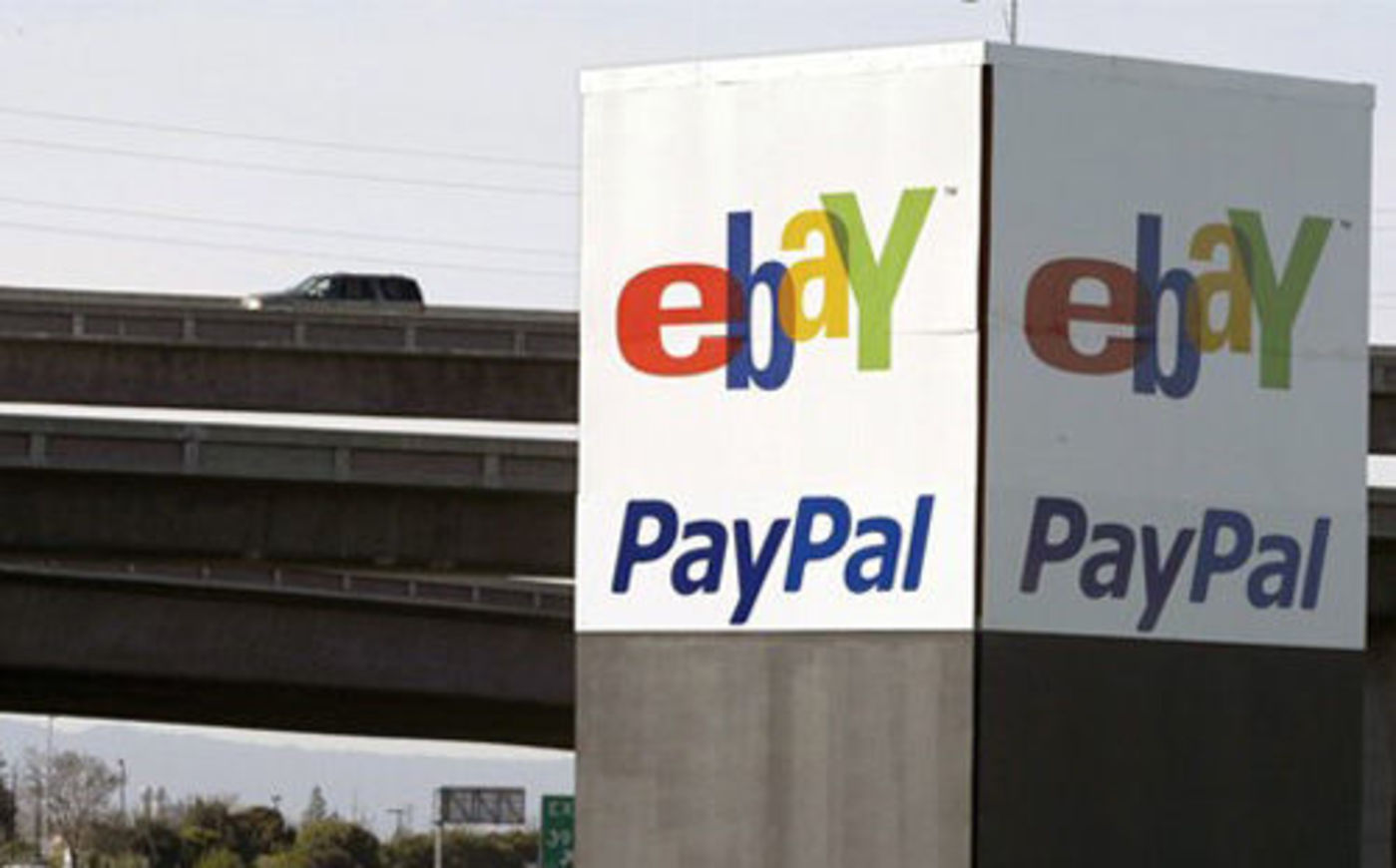 During the Great Depression of the whole industry under the epidemic situation, the unknown eBay went out of its own way. Before the online market entered April, eBay had been below $40, and now, eBay is expected to exceed $50.

The performance was flat, but Gmv increased significantly

EBay is currently one of the world's largest online trading platforms, with 25 international domain name websites serving millions of buyers and sellers around the world. Using online technology and services, the company, in a sense, overthrew the small flea market, bringing buyers and sellers together to trade anytime, anywhere. In recent years, eBay has been innovating in trading services, launching new international standard transportation services to help sellers save freight, support cross-border payment, and provide consumers' demand information for sellers through data network, so as to facilitate sellers to make wise choices on commodity inventory and pricing.

EBay's performance in 2020q1 was not impressive, with weak trading and advertising revenue (mainly traffic fees, which provided free platform services for sellers), with revenue down 1.6% to $2.37 billion. 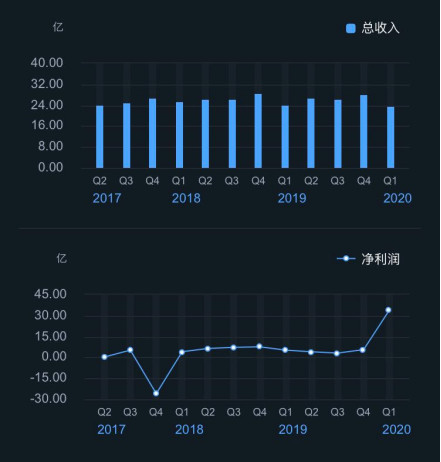 Although the performance is not impressive, the growth of Gmv (gross merchandise volume, mainly refers to the transaction amount of websites) in April was amazing, with a year-on-year increase of 20%. The surge could be the result of a number of recent factors, including broader network transfers during the covid-19 period, as well as government stimulus measures. Although it's a short-term stimulus, it's a good view of eBay's performance.

In addition to its financial performance, eBay has made a significant digital upgrade under the epidemic. The company hired the chief operating officer of Wal Mart e-commerce as the new CEO, and accelerated the pace of upgrading. The positioning is further clarified, and the service market is for small enterprises.

As of June 4, eBay's user data has grown dramatically: thanks to increased traffic and improved marketing efficiency, eBay's new guidelines have increased Gmv from 23% to 26%. In addition, the platform has added six million new and reactivated buyers, as well as tens of thousands of small business sellers.

To this end, eBay significantly increased its revenue forecast for 2020q2 by 14 percentage points, and its revenue growth target was 18% regardless of the impact of the exchange rate. Equally important, earnings per share will soar to $1.04, up more than 50 per cent from last year.

The secondary market, eBay, is undervalued

If you look at the financial situation of e-commerce business, eBay is expected to achieve sales of $2.75 billion in this quarter, while Shopify's target for this year is only $2.2 billion. The profitability of eBay is better than that of its competitors such as Amazon, WAYFAIR and Shopify. Therefore, there is a long-term driving force for the share price of eBay, while eBay in the secondary market is undervalued. 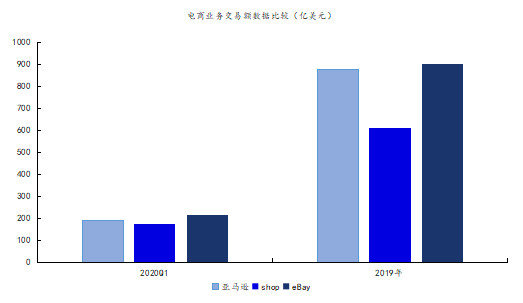 EBay is one of the few companies in the U.S. stock market to announce its full year 2020 forecast. Under the epidemic situation, the sharp rise in e-commerce demand is a prominent reason for the rising share price and market value of eBay. As consumers expand online shopping, eBay expects the group's traffic and final sales to rise significantly.

So far, more and more sellers have joined eBay. Since March 2020, eBay has added thousands of small business sellers. Similarly, under the epidemic situation, the global e-commerce industry is optimistic. Gmv in the United States increased by 92.7% in May 2020 year-on-year. Gmv in April and may accounted for 22% of all retail sales, higher than 11% in 2019. Although some analysts think it is temporary, other e-commerce stocks are growing, and eBay has more room for growth.

If the classified advertising division makes revenue at $10 billion or more, eBay will reach a record profit margin by the end of this year, increasing EPS and PE. In the figure below, the red line is EPS per share, which shows a rise of 133.2%. March to April is the lowest cost of new investment for eBay in at least three years. 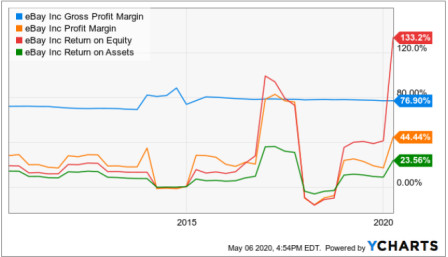 Combined with the results of Paul Franke's momentum analysis, since the end of January, eBay has outperformed the typical market return of the S & P 500 index by 30%. The red arrow indicates that the negative index (NVI) of the past year has shown a trend of steady accumulation. In the days of falling volume, many buyers pushed up their prices. As shown in the figure below, the blue arrow shows that the obv line has risen strongly since the end of March. Basically, buyers will appear in both high volume and low volume days. Overall, from the technical analysis, eBay is bullish. 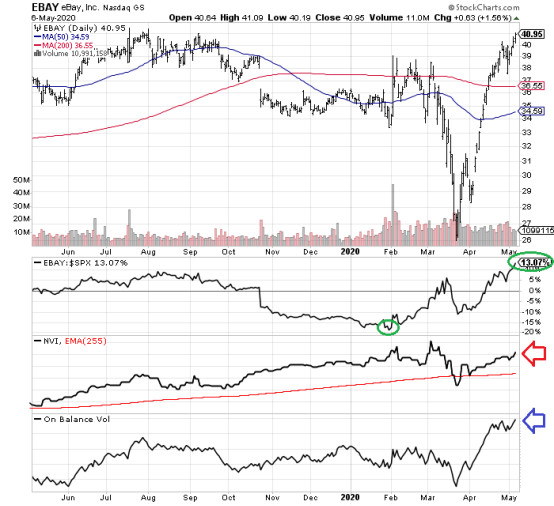 Under the epidemic situation, eBay ushered in the strong dawn of downstream market, but there are still risks worthy of investors' attention. After the outbreak, all sales growth in the past few months may fall back completely. Before the outbreak, eBay traded at less than $40, so the risk is that eBay may fall back to that level, which means abandoning at least its recent $10 gain. In addition, digital growth is not sure whether it is temporary market welfare or permanent performance, which is also related to the profitability of eBay.

Related news
WeWork,eBay,Juul 's CEO leaves one after another within 24 hours
The CEO of eBay resigned after four years in office because he disagreed with the new board
NYSE parent company plans to buy eBay for us $30 billion
The undervalued eBay is quietly ushering in the golden age of value?
EBay announced the launch of sneaker certification system
Hot news this week
China has found 35 known cases of the new zoonotic virus Langya
Losses in a single quarter of $ 23.4 billion a record, SoftBank did not carry the plunge of technology stocks and the devaluation of the yen
The prevention and control of the American Monkey epidemic has failed. What should I pay attention to?
Is the micro -business headache? WeChat friends are suspected to have a big move: 7 can only be posted a week
Kuaishou launched a self-developed cloud intelligent video processing chip: The chip has been streamed successfully
The new product of Xiaomi MIX is coming: both internal and external dual -screen has been upgraded to make up for the previous generation.
A new zoonotic virus, Langya, found in China has not yet been confirmed to be transmitted from person to person
Ministry of Public Security: Single telecommunications network fraud continues to cause 40 % of all electrical fraud cases
Special price "kill ripe"? Bike-sharing platforms have different prices for the same package for different users
A tech company in Shanghai has been fined 220,000 yuan for swiping orders to improve its ranking on Yelp
The most popular news this week
Yuyuki Kobayashi joins NetEase game! He worked on Devil May Cry 4 and Resident Evil 4.
Cyber violence governance needs the concerted efforts of all sectors of society
WeChat releases a new specification for the public account avatar setting, and the official news reminder is prohibited
After the U.S. chip bill takes effect, the manufacturer's snatching subsidy war is even more intense
Thousands of flights in the United States are delayed or canceled: User collapse extreme weather is frequent
Off the shelves one after another! The Sogou search App followed in the footsteps of Sogou Map
Xiaomi MIX flagship top with price reduction: consistent with the price of 12S Ultra
Semiconductor industry burst! Us Orders' Mother of All Chips' banned
Tesla suddenly accelerated out of control into a wall tragic: the owner of the right pedal and drive assistance
Lei Jun was splashed with cold water