Since 2019, the United States has continuously upgraded its measures to crack down on Huawei, and has continued to pressure European countries to ban Huawei. As a result, Britain and France, which once gave Huawei a "green light", tightened their policies against Huawei. Recently, the Italian government was also exposed to be considering whether to exclude Huawei from the 5g construction project.According to an Italian political source, the issue is currently under "consideration at the government level," Reuters quoted the Italian "Republic" as saying on the 8th. But the Italian government has yet to confirm the news.

Last week, Italian foreign minister dimayo met with the US ambassador in Rome. The talks between the two sides involved Huawei related issues. Italian Minister of economy and finance guartieri and defense minister Giulini have also raised the issue informally.

The political source said that Giulini was definitely the most supportive of Atlanticism, which emphasized the military, political and economic solidarity and cooperation of North American and Western European countries.

In addition, as a member of Italy's ruling alliance, the "five star movement" organization is also reconsidering its previous support for Huawei's position.

Italian officials believe that even if Democrat Biden wins the November presidential election, the US crackdown on Huawei is unlikely to change. In December, copasir, the Italian Parliament's National Security Council, called on the government that Italy should consider preventing Chinese telecom companies Huawei and ZTE from participating in the country's 5g network development.

Borzi, a member of the Commission, declared that all the conditions for establishing a 5g network in Europe would be met without using Chinese technology. He also said that Italy may use the planned EU new crown epidemic recovery fund to develop 5g network, which means Italy needs to make clear its position and exclude Chinese companies.

It is worth mentioning that Italian government officials have repeatedly expressed their support for Huawei.

In recent years, Huawei has also continued to increase investment in Italy. Global network reported in July last year that in order to invest $3.1 billion in Huawei's operations and another $52 million in R & D in the next three years, these investments will create 3000 jobs in the local area.

In addition, cooperation between China and Italy is deepening. In March last year, the two sides signed an agreement on infrastructure projects of up to 2.5 billion euros. Novel coronavirus pneumonia outbreak this year, the serious epidemic of Italy did not wait for the assistance of European allies. China first took a helping hand to Italy. The two countries have carried out fruitful cooperation in the field of anti epidemic, attracting worldwide attention. 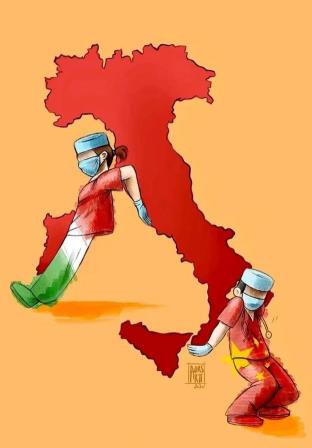 In March this year, an Italian girl painted a painting to thank China and Italy for their cooperation in fighting the epidemic

Since this year, some European countries have wavered on Huawei. From putting Huawei on the "entity list" to cutting off Huawei's chip supply chain, as the US's despicable act of suppressing Huawei continues to escalate, Britain and France have turned their backs on Huawei. The UK said that it would gradually exclude Huawei's technology within the year, and then said whether to exclude Huawei depends on the measures of the United States. France also claimed that Huawei would not be banned, but suggested that operators should not use it.

As an ally of the United States, Germany has not "followed suit". Deutsche Telekom said that "Huawei is the key to our 5g plan".

On July 6, Zhao Lijian, spokesman of the Chinese foreign ministry, said that 5g technology was the cutting-edge, leading and platform technology of the fourth industrial revolution. Under the tide of globalization, the development and utilization of 5g will be the process and product of negotiation, co construction and sharing by all countries.

In response to France's tightening of its policy towards Huawei, Zhao Lijian stressed that he hoped that France would uphold an objective and fair attitude, respect the market rules and the will of enterprises, independently make choices in line with their own interests, and provide an open, fair, just and non discriminatory business environment for enterprises of all countries, including Chinese enterprises, with practical actions.