What is the difference between the mass production of arm China "Star" processor and Cortex-M?

According to the Global Association for mobile communication systems (GSMA) mobile think tank, the global market share of Internet of things will exceed $1.1 trillion by 2025. The Asia Pacific region with China as the main body will become the largest Internet of things market in the world with a sum of 386 billion US dollars, while North America and Europe will become the second and third largest markets.

In the future, Internet of things applications will face the demand of lower power consumption and more personalized peripheral functions. Accordingly, in the future, the world will put forward more demands for MCU which is inseparable from the development of Internet of things, which will include providing users with a reliable sense of security. For example, product security, stable supply chain supply, product encryption and application level security. Secondly, due to the increasing demand of the Internet of things for radio frequency, including Bluetooth, WiFi, ZigBee and even sub-g transmission, MCU also needs rich interfaces. Finally, MCU also needs low power consumption and reliability.

For the huge Internet of things market in China, there is a more localized demand for MCU. However, in the current Chinese market, most MCU are based on Cortex-M core of arm, and there is no core specific to the Chinese market.

This week, anmou China released the R & D process, characteristics and implementation of star-mc1, the first processor for China. At present, the processor has entered the commercial stage.

Star-mc1, as the first product of "Star" series products, supports all features of the existing armv8-m architecture and the latest instruction extension. According to Liu Shu, vice president of anmou's product R & D in China, the processor is a very tightly coupled high-efficiency microprocessor, with performance of 1.5dmips/mhz-4.02coremark/mhz, and inherits DSP instructions and floating-point computing units of armv7 and armv8 structures. Compared with the previous generation of ARM processor, the performance of star-mc1 can be improved by 20% under the same frequency. 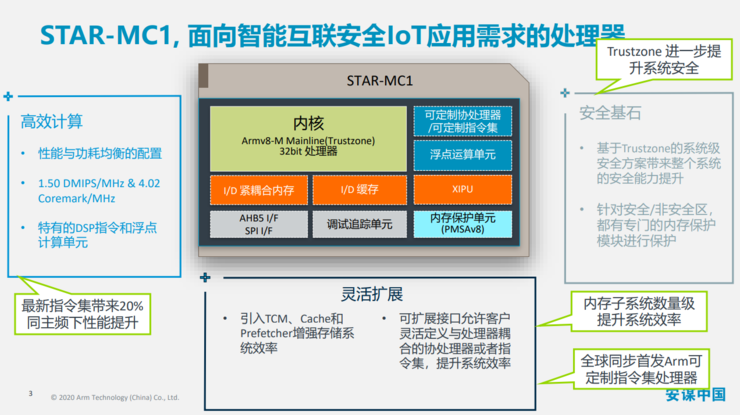 For armv8-m, the security technology is introduced into the architecture, and the TrustZone security scheme is adopted to isolate the running environment into safe zone and non secure zone, so that the user's sensitive running program can run in the secure zone and the application-oriented program can run in the non secure zone. TrustZone was proposed by arm company in 2006 and applied in A-Series processors. Now it is still used in M-level processors to ensure the security requirements of MCU.

Wu Zhongjie, chairman and general manager of smart microelectronics, an Mou's partner in China, said that security is one of the most important features of MCU. If a scheme is cracked, the solution provider will suffer huge losses.

At the same time, the coprocessor interface and user customizable instruction set are embedded in armv8-m. The former can help users to make different innovations in the face of market segments, while the latter can facilitate users to customize their own instruction set. On the one hand, it can solidify the user's own characteristic operation in the CPU pipeline to achieve very high execution efficiency. On the other hand, it can also protect customers' intellectual property rights and provide differentiated services. These innovative architectures of armv8-m can be implemented in the "Star" processor.

The innovation of star-mc1 released this time lies in the improvement of data reading efficiency of the processor. This is due to the introduction of the whole cache structure in the M-level processor. The data read of the processor can be read without passing through the bus or external memory.

Cortex-M of arm, star of China

"Star" processor has the characteristics of localization. Anmou China said that when defining this processor, it conducted sufficient research on the Chinese market, fully listened to and explored the needs of many domestic partners and their understanding of the application.

Different from Cortex-M, "Star" processor adopts new instruction architecture upgrade and new memory subsystem to improve system performance. In addition, "Star" processor also adopts the suggestion of Chinese customers to add external operation of flash interface, which is not available in ARM CPU in the past. It is worth mentioning that the new architecture upgrade and definable instruction set were launched almost simultaneously by anmou China team and arm Cambridge team, which demonstrated the outstanding execution, design ability and verification ability of the Chinese team.

Wu Zhongjie, chairman and general manager of smart microelectronics, an Mou's partner in China, also said that star core was chosen because of the assurance of arm standard quality and the R & D and production of the domestic team.

It is worth mentioning that, as China's indigenous innovation products, in China's IP authorization, whether in business or configuration, will be more flexible, there are many different models to support different needs of customers.

The future of star processor

At present, "Star" processor has more than 30 authorized customers, of which 21 customers have carried out project integration and design, and 7 projects have been taped. Quanzhi technology also recently released the IOT chip xr806 based on the "Star" processor. The chip has the characteristics of low power consumption, high performance and security. It supports WiFi and Bluetooth 5.0 protocols, and can meet the connection requirements of smart home for various complex scenes.

Liu Shu said that the next generation processor that anmou China is currently working on is based on the v8.1 architecture, and will continue to have greater improvement in the data processing capacity of artificial intelligence. Based on the input of the Chinese market, we will continue the route of high performance, low cost and low power consumption. At the same time, we will continue to pay attention to the characteristic development of China's IOT market to meet the needs of users.

With Chinese processors to support the Internet of things market in China, star processor will face more opportunities and challenges.