No one in Xiaomi's legal department? I can't bear it this time. I told the Tianji network of Xiaomi TV

During the evening of July 7, according to ZEALER official Weibo report, Xiaomi TV was vilified by business, has commissioned 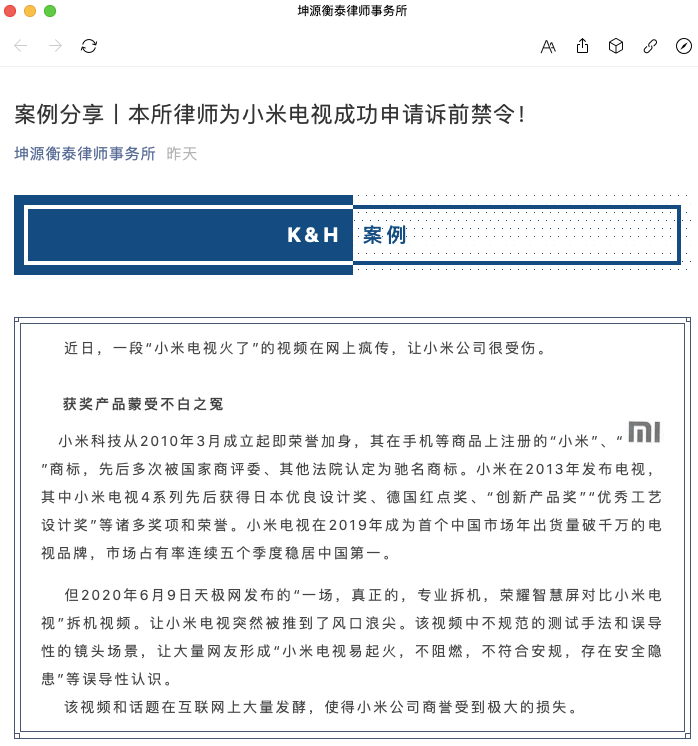 What is the context of the matter?

However, this conclusion did not seem to be widely accepted at that time. Under the related problems of Zhihu platform, many netizens said that the comparison in the video was unfair to millet, and the obvious point was that the flame spraying time of the two products in the evaluation was different.

Undoubtedly, the rapid spread of this video has a certain impact on Xiaomi company.

●Tianji net selects the back shell which is not required by the national standard, so the test object is wrong;

● The test method of Tianji net does not conform to the regulation;

Tianji net is equipped with pressure fuel gas tank, and the flame emitted by the spray gun can reach up to 1300 degrees, and can even be used as welding metal. The national standard test method requires that the power is limited to 50W standard test flame, the flame shape is similar to the domestic gas stove flame. In addition, the national standard requires that the test samples should be cut to a unified standard scale, tianji.com does not cut the test materials to the same scale at all.

●Tianji.com didn't display the test video completely, which hindered the audience to watch the test effect;

●There is no contrast condition of fairness and equality in Tianji network;

The host in the test video declared before the fire test:

It is worth noting that in the civil ruling issued by Chongqing No.1 Intermediate People's court, Xiaomi's request is to delete official website videos and micro blog posts. At present, tianji.com seems to have removed relevant content from its official website and microblog. 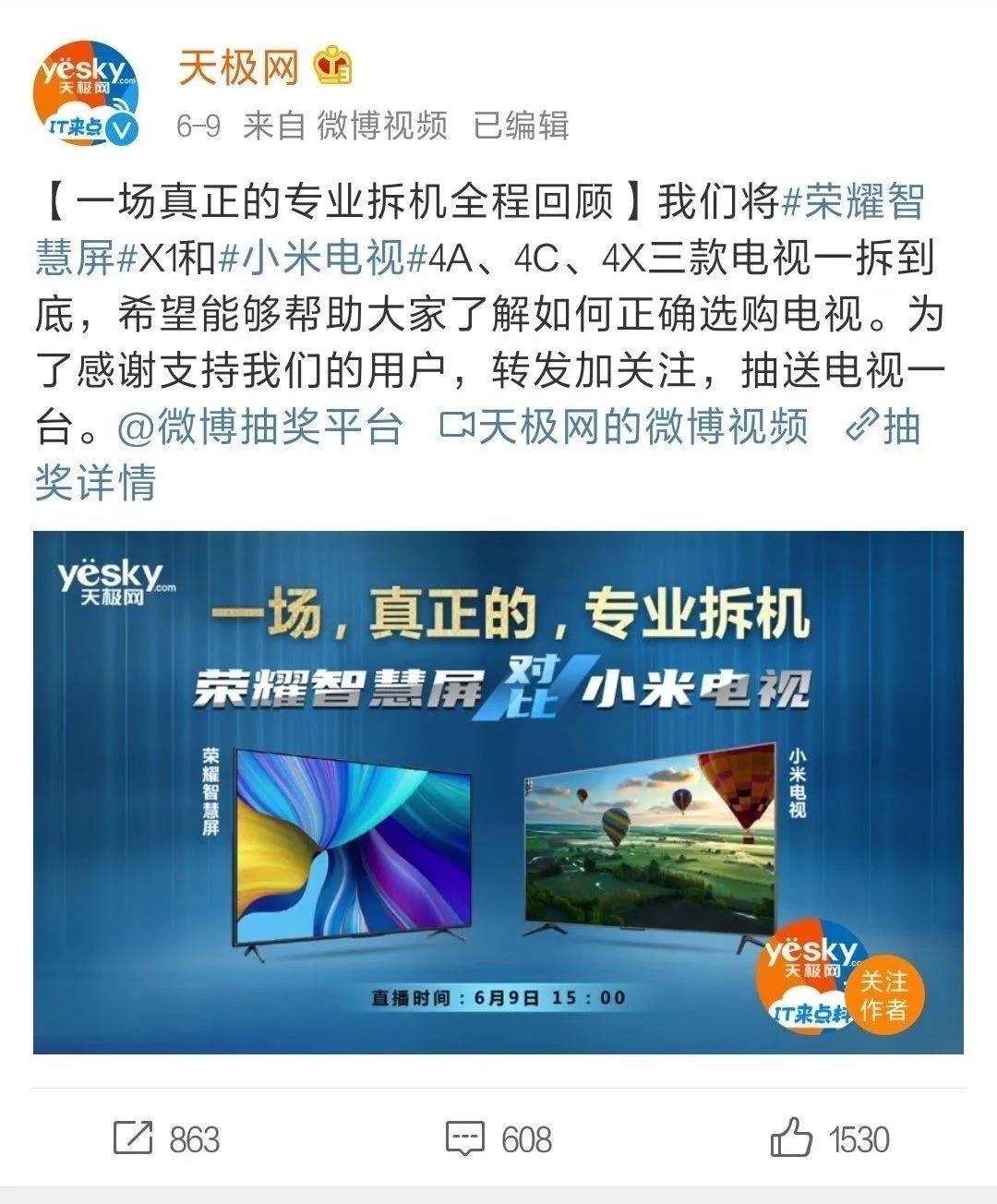 This video has been published as early as June 9, nearly a month ago. What has Xiaomi done in such a long time? We have made a brief review of this

●On June 15, Xiaomi sent a "infringement warning letter" to tianji.com through Shunfeng, asking it to immediately delete the relevant infringement links. As a result, Tianji still went its own way and did not delete it.

●On June 22, Xiaomi applied to the court for the pre litigation property preservation. The guarantor of the preservation was Chongqing Branch of China Dadi Property Insurance Co., Ltd., with a guarantee amount of 10 million yuan.

In addition, it is worth noting that this Xiaomi application for pre-litigation preservation of the court isXiaomi will certainly have a follow-up prosecution, if only ask Tianji to delete the relevant articles and eliminate the impact, the lower court can solve it.

In retrospect,This may be the most formal action of Xiaomi's Ministry of justice in recent years.It's been on the Internet

How about Xiaomi TV?

So, what is the actual performance of millet TV at the top of the storm?

According to the global TV market share data of the first quarter of 2020 released by omdia, an international well-known television research and statistics agency, there are 7 Chinese enterprises on the list, which is close to half of the total number of the list. However, millet TV, which is the largest sales volume in China, only ranks 10th in the world, indicating that the global performance of Xiaomi TV is not very satisfactory. 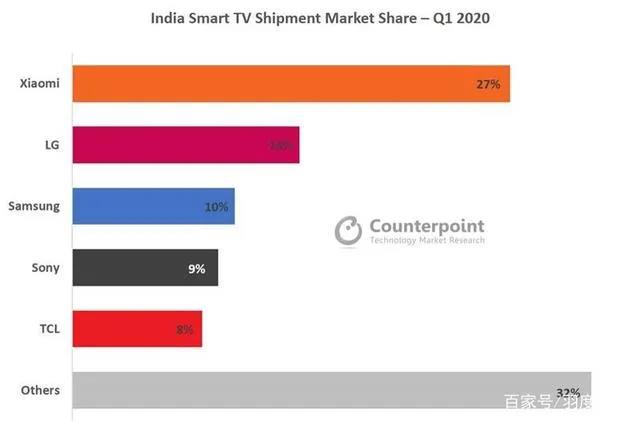 At the same time, according to the latest statistics report of Indian TV market in Q1 2020 released by counterpoint, an overseas data research organization, millet TV is very popular in the Indian market, with a market share of 27%, ranking the first. Moreover, such a proportion is still far behind LG, which is the second 14%.

It can be seen that Xiaomi's TV has occupied a corner of the global market share and is very popular in the third world countries such as India, so it may have better growth in the future.

In terms of quality, take Xiaomi TV 4A as an example. Xiaomi TV 4a is a new product launched at the beginning of 2017. This type of product pays more attention to cost performance and is equipped with artificial intelligence voice system. The overall picture quality performance is acceptable and there are abundant resources integrated. In actual sales, as soon as Xiaomi TV 4A was launched, it became the sales double champion of tmall and Jingdong.

Therefore, in a comprehensive view, Xiaomi's TV has strong competitiveness in the same type of products, and its relatively higher cost performance ratio has become its own deeper moat.

After this civil judgment, perhaps the status of Xiaomi company's legal department can be slightly improved. However, on liepin.com, the author simply browsed Xiaomi's job requirements, and found that compared with the technical posts, advertising planning posts and data analysis posts, the salary of legal posts in Xiaomi company was not high. It can be seen that Xiaomi still has a long way to go to strengthen its legal team. 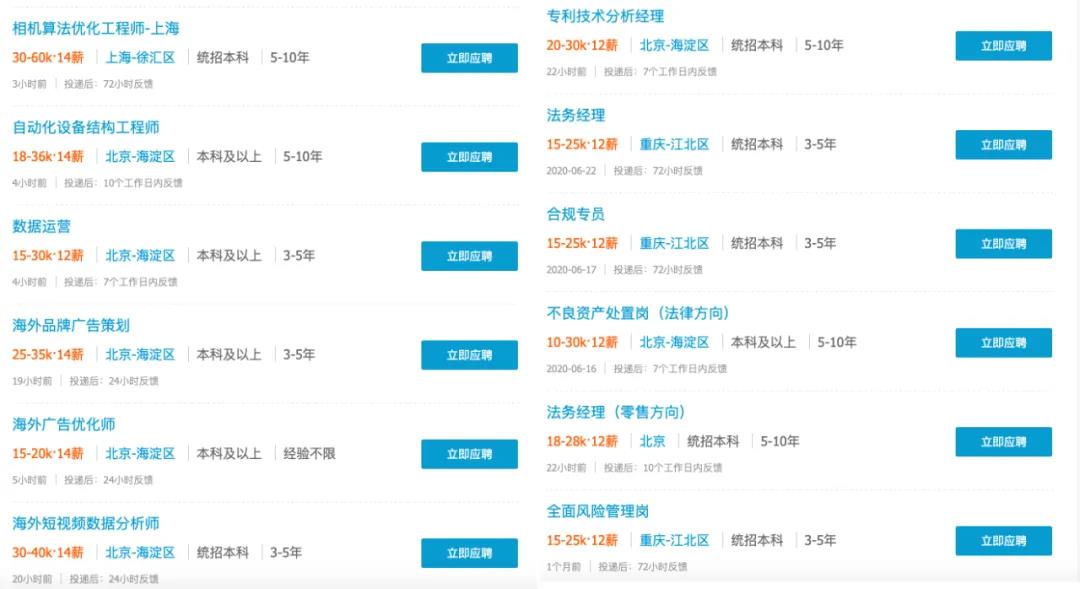 On the left is the position on the front page of recruitment, and on the right is the legal post

Someone just sent me a link, which made me laugh and cry. Friends and businessmen have been holding back for a long time. In view of a lot of problems of XM TV exposed in more than a dozen glory smart screens and XM TV disassembled live broadcast for more than half a year, it is said that the two L's have always been very distressed and anxious, so they deliberately put out the purpose of this lawyer's letter at this time, and guess:

1. The test method is not objective and radical, but it dare not mention nearly 20 comparison test items of glory smart screen, which proves that the comparison contents of other dismantling machines are true, fair and just, and live broadcast, so there is no fault

2. Recently, several TV models have been released by friends. Many people are eager to try and continue to compare them. At this time, it sends out a lawyer's letter to tell you with a big stick that it has been taken apart. Please kneel down and don't dismantle it!

3. In the mobile phone digital industry, extreme testing is a common form with both fun and geek digital spirit. Various manufacturers have conducted various tests and comparisons, and even friends have done extreme tests such as sawing mobile phones, stepping on high-heeled shoes, freezing ice, steaming in sauna rooms, etc. The mobile phone was sawed off, and no one said you didn't meet the national standard.

In fact, just ask a soul question: is the test fair and equal? Can it be reproduced completely? Dare you test it again? 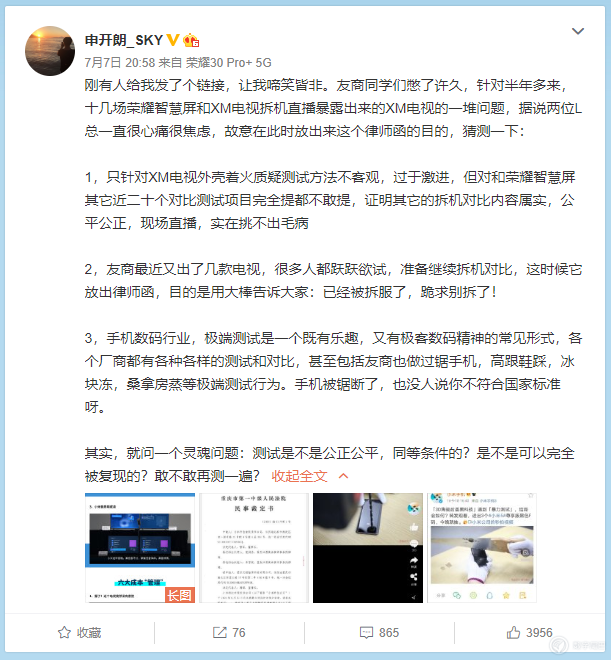 2. Tianji.com is burning Xiaomi TV, and Xiaomi's legal department is attacking hard. This time, we have to manage it, black cat review

3. "Xiaomi TV has been slandered by business and has successfully applied for pre litigation injunction", smart TV network

4. Xiaomi TV is too cruel to be hacked. The Ministry of justice sued tianji.com for unfair dismantling. Can Xiaomi win? 》, Dingdang digital

6. Xiaomi dominates the Indian TV market, with a far ahead market share, followed by Samsung! 》The feather is extraordinary