According to U.S. media on August 1, people familiar with the matter said that Microsoft had suspended negotiations on the acquisition of tiktok's U.S. business after trump expressed his opposition to the acquisition of tiktok's U.S. business by a U.S. company on Friday night.According to the report, the letter on criteria has not yet been concluded, but the two companies are trying to clarify the White House's position.

Trump told reporters on his plane Air Force One on July 31 local time, He will ban TikTok from operating in the United States. As for TikTok, We are about to ban them in the United States (operating)." Trump says, I have this power. I can use the executive order... In other words, And we're gon na cut (TikTok run in the U.S.), Cut it off ." And said, He banned TikTok from operating in the u.s." as early as saturday, august 1.

Not long ago, trump said it planned to order the divestiture of Beijing byte hop Technology Co., Ltd. (tiktok's parent company) in tiktok's US business. 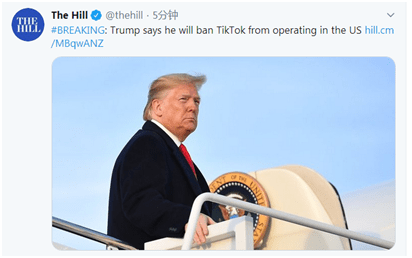 Trump may force tiktok to sell himself, Microsoft is negotiating to buy

Trump: tiktok will be banned from operating in the US or implicitly not supporting US companies to acquire it

A letter to tiktok community released by tiktok official account