TikTok US General Manager: we will be operating in the United States for a long time and we are not going anywhere 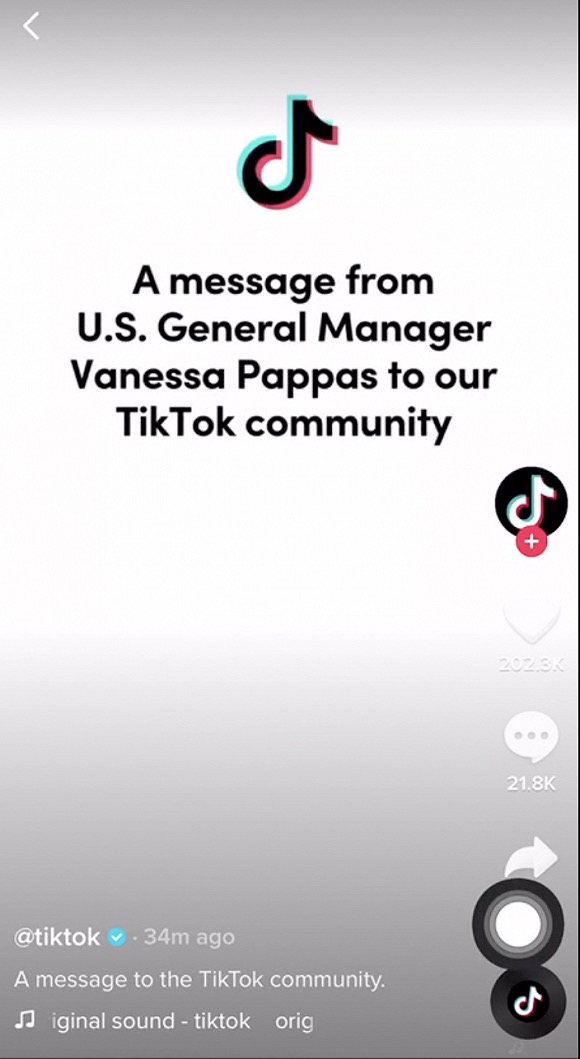 Previously, byte hopping tried to retain a minority stake in tiktok's U.S. business, but was rejected by the White House.

According to foreign media reports, byte beat negotiations with Microsoft have not yet ended, but the two companies are trying to figure out the White House position.

But according to TikTok official response, there are still long-term plans to operate in the United States. TikTok General Manager of the United States said :" We heard your support, we want to say thank you, we are not going anywhere ."

She added that tiktok already has 1500 employees in the United States and plans to recruit another 10000 over the next three years, and will provide a $1 billion fund to support creators who share videos on the platform.

In response to trump's earlier claim that tiktok would divulge American privacy to the Chinese government, papas responded that "in terms of security, we are developing the safest application because we know that is the right way to do it."

Papas calls on users to continue to share their voices and support TikTok.

Related news
U.S. media say Microsoft is suspending talks to buy tiktok's U.S. business, trying to find out the White House's position
TikTok US General Manager: we will be operating in the United States for a long time and we are not going anywhere
TikTok America sell Google?
Is it necessary for the United States to kill tiktok?
Banning tiktok will aggravate the monopoly pattern of American science and technology enterprises
Don't give up: Microsoft is still negotiating for tiktok
Internet users in America launched the tiktok TikTok: support for overseas version of the jitter.
American youth: saving tiktok
Why does Microsoft have to buy tiktok?
Hot news this week
Foreign media revealed White House documents: the ban may make apple and Google "off the shelves" tiktok
Qualcomm lobbied the US government to lift the ban on the sale of components to China
Tencent re racing e-commerce, but does not want to make the next pinduoduo
Wechat in Apple's Google App store may be banned. What if wechat can't be used on iPhone
Understanding Xiaomi's AB side in ten years with 12000 words
Xiaomi 10 supreme commemorative edition press conference Lei Jun's live rehearsal
After the sesame seed, Alipay's "financial points" is officially launched: let's see how much you have.
Votebymail is dedicated to helping American voters easily apply for postal ballots
Lenovo YOGA e-book official Xuan :4 G All Netcom support phone calls SMS
Liquid nitrogen overclocking ASUS motherboard bw2020 highlight time
The most popular news this week
After wechat and tiktok, will the United States attack Ali again?
Huawei has paid $1.8 billion in 5g Era
The 5nm A14 processor saves more power and the iPhone 12's battery life is still soaring
Pinduoduo's response to Tesla's refusal to deliver group purchase model 3: no malicious support for rights protection
Hongmeng vehicle system appears in Huawei: Automobile will become living space
Ali and Xiaomi's new entry into Hang Seng Index to attract capital inflow and improve stock liquidity
The U.S. Department of Justice says Yale illegally discriminates against Asians and whites
China's breakthrough in satellite laser communication: global coverage
Apple, Disney, Wal Mart and others oppose Trump's wechat ban: worry about affecting competitiveness
Take the lead in opposing the wechat ban! Apple is in a hurry: foreign media tell the truth