Domestic SSD with Samsung particles! Is it cheating consumers or is it true to see the actual measurement

The domestic SSD、 memory has always been the topic of the current DIY circle, we can see a lot in recent years

Domestic products should be self-improvement. There is no doubt that pure domestic digital products are necessary. They can not only increase national self-confidence, but also add some new blood to the market which is still dominated by overseas brands, promote competition between manufacturers and let consumers use better and more affordable products. 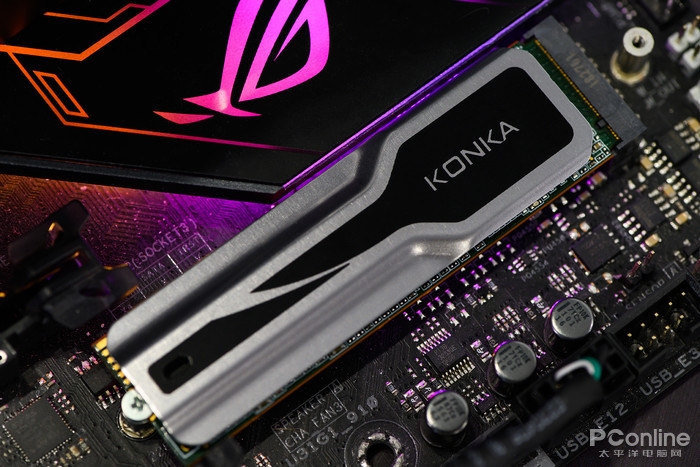 Although domestic particle manufacturers have begun to act, But now the domestic brand SSD is mainly a

But there are some outstanding people who can compete with the manufacturers in the front row. Among them, the one with more gimmicks is the Konka k580.

Maybe a lot of people will be curious about a household appliance brand that the older generation knows, why they suddenly do SSD. 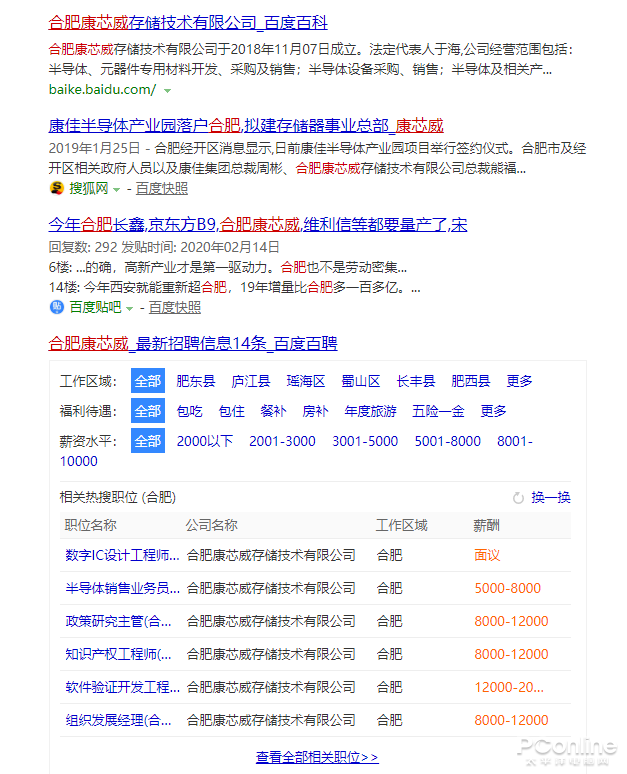 As the most important semiconducto

The introduction here means that Konka did not develop particles and master controls, but assembled them like a collage. However, the actual operation is not so simple.

In addition to Konka, some other well-known home appliance manufacturers have also entered the semiconductor industry, such as Gree, TCL and Changhong.

Here will not be in-depth, interested can find omnipotent Baidu to understand. 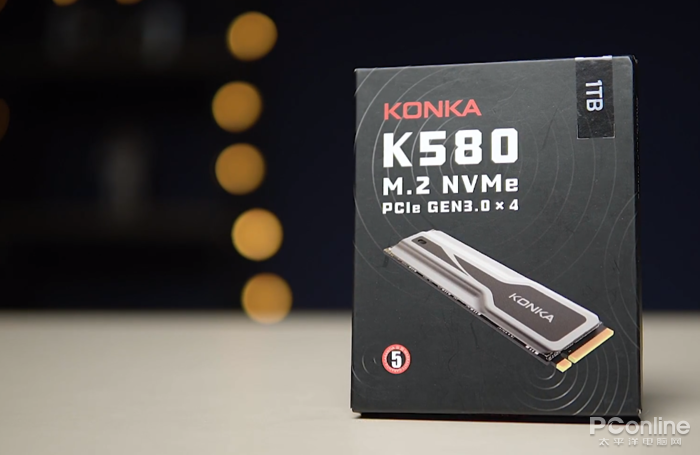 It should not be too late. Let's have a look at today's Konka k580.

The packing box is relatively simple and clear, SSD appearance, capacity, protocol, channel bandwidth are printed on it, the lower left corner of the 5-year warranty, consistent with the current mainstream manufacturers to provide quality assurance. 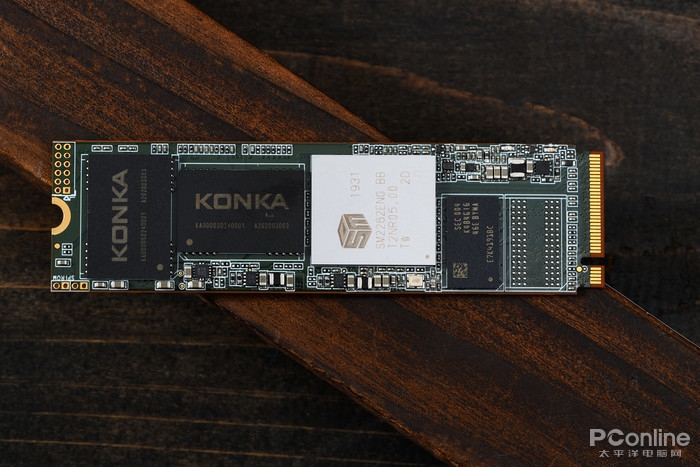 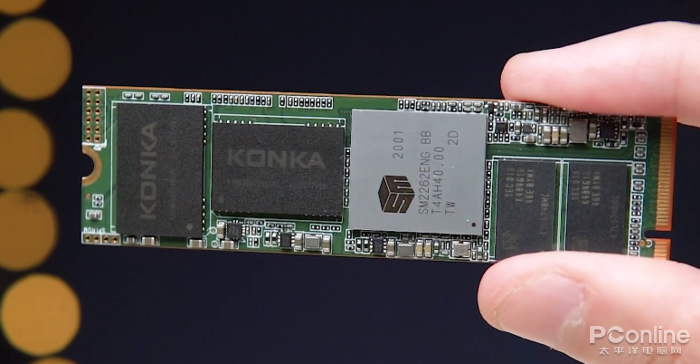 All the flash memory particles have been marked with Konka's own label. However, according to Konka, it is the wafers they purchased from Samsung and then cut and repackaged by themselves. That is actually Konka's Samsung particles. 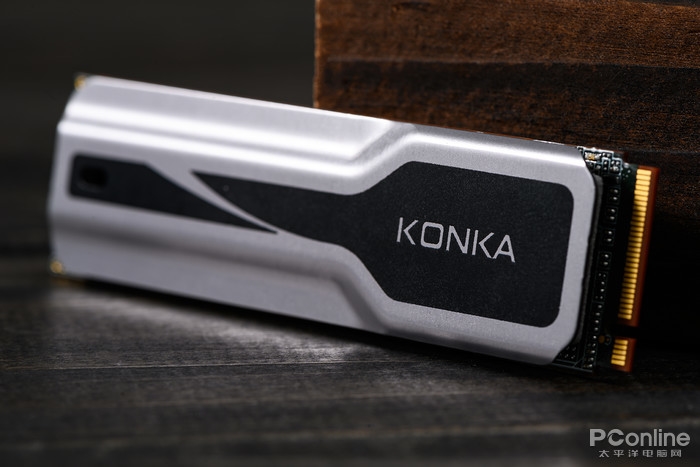 Look at the heat sink. Konka's radiator is designed by Konka. You can use it when you stick it. If you look good, you can judge it yourself. 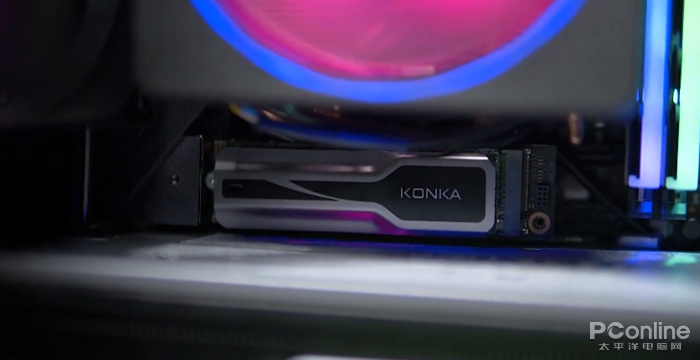 On the computer, we install the solid state into the m.2 slot between the CPU and the graphics card, and use the attached heat sink to simulate the use situation.

Heat dissipation measures for the chassis,There are only two fans at the top and the rear, and the two large heat sources are sandwiched with solid state, so the overall heat dissipation situation is quite severe. 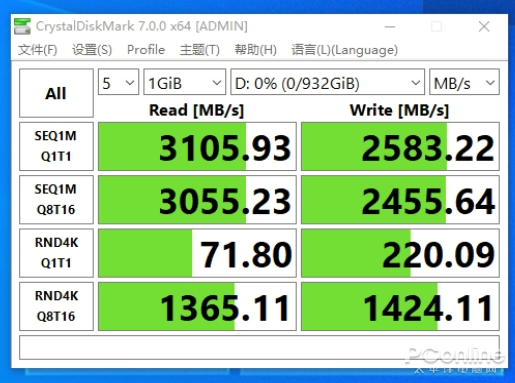 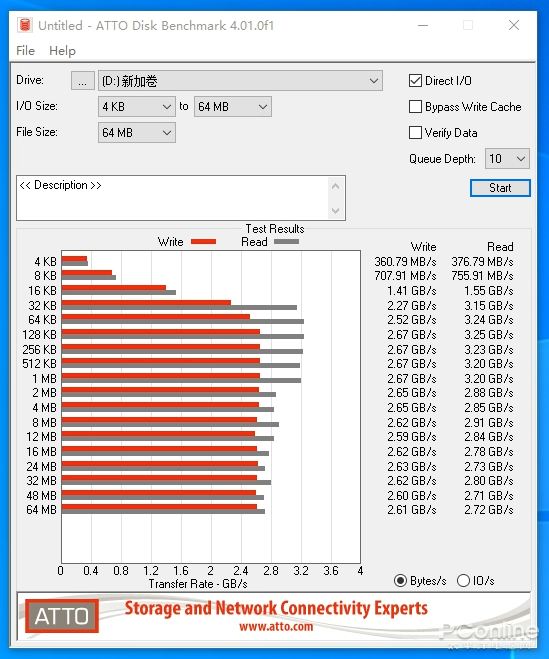 Atto disk benchmark, from 128KB, belongs to the range of large file sequential read and write. Under the setting of qd10, the average write speed is about 2.65gb/s, and the reading speed jumps greatly, fluctuating from 2.71gb/s to 3.25gb/s 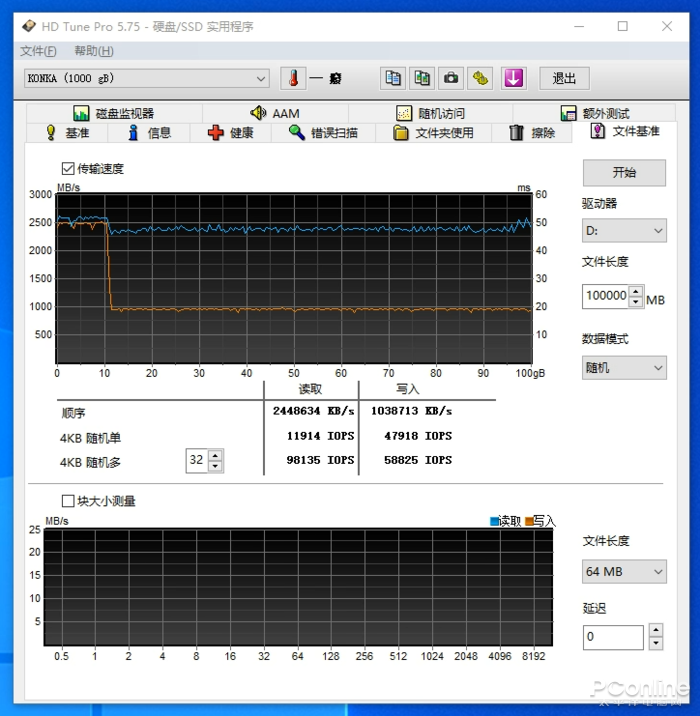 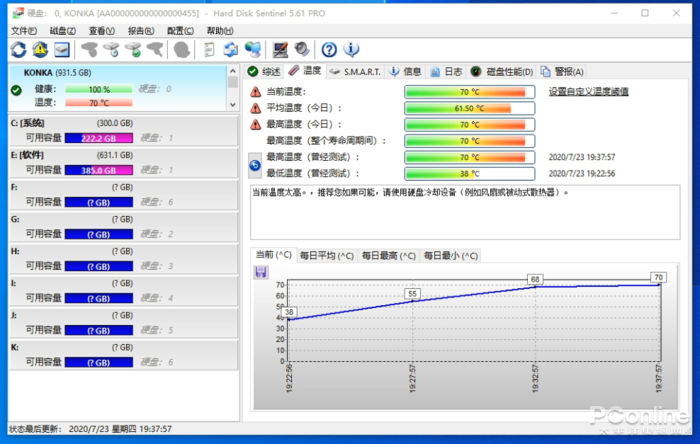 In terms of temperature, after writing data for half an hour through iometer, the maximum temperature reaches 70 ℃ 15 minutes later, which is still quite high. However, through aida64, we can see that the upper limit of the speed reduction is 75 ℃, and there is still a certain distance. Moreover, the writing pressure of iometer with large capacity and long time is rarely encountered, so there is no need to worry about overheating during use.

The above is the test results of the empty disk, and the next is the stress test. 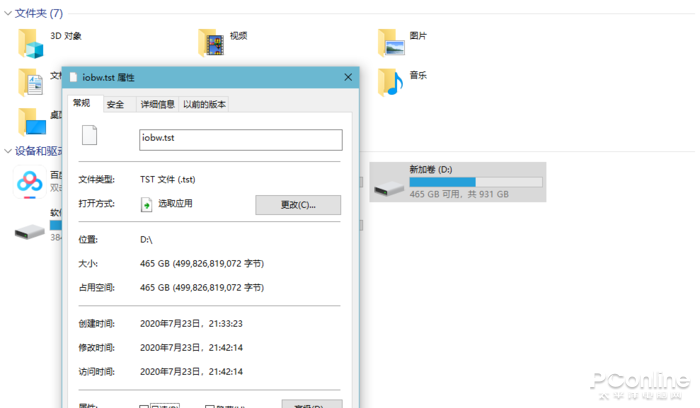 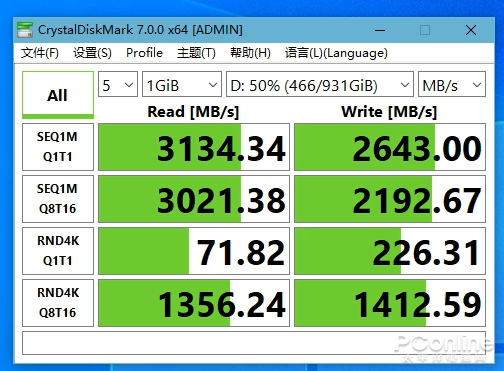 The results of CDM are almost the same as the empty disk. The sequential read-write speed is a little faster than the empty disk, which can be regarded as the test error. 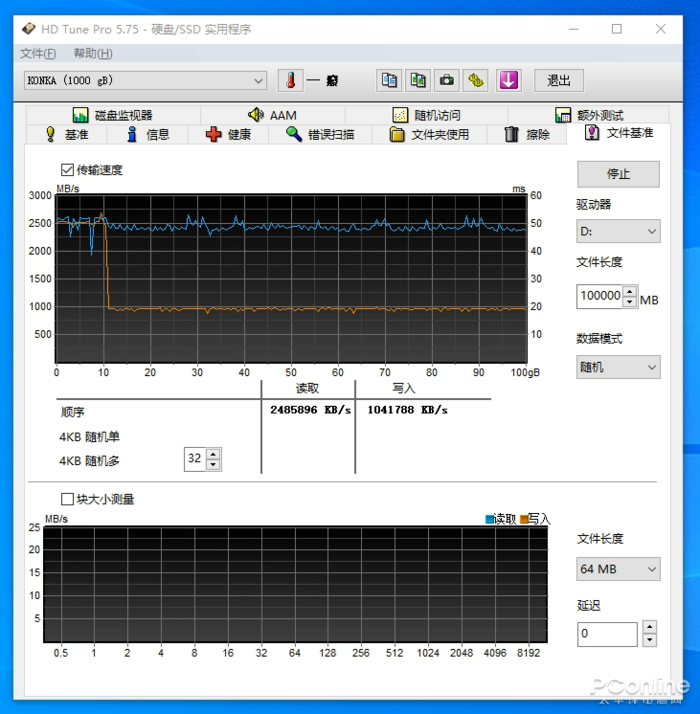 After half a disk, the hdtune speed fluctuation is slightly larger than that of the empty disk, but it also maintains at the speed level of the empty disk. The write in buffer is 2500MB / s, the out buffer is 1000mb / s, and the read speed is 2400-2500mb / s.

Later, we used iometer to customize the size of 128KB, and qd10 continued to write in sequence for half an hour to simulate the environment of writing large files for a long time. 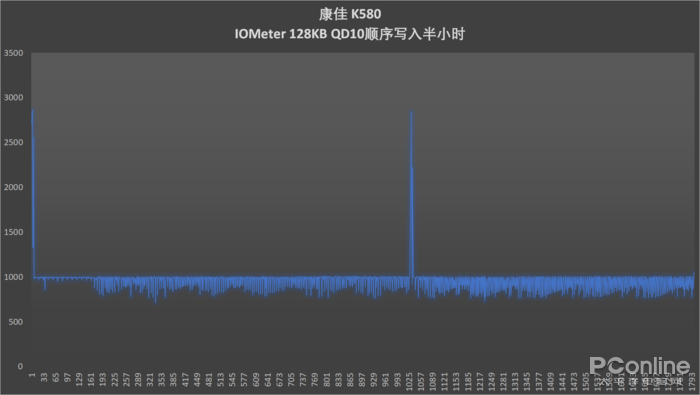 On the whole, The write speed is relatively stable, and there is not much speed fluctuation after long writing.

After the completion of the last item, it will be left for half an hour, 4K in size and qd10 will be randomly written into the test for one hour to simulate the frequent reading of small data in daily application and game. 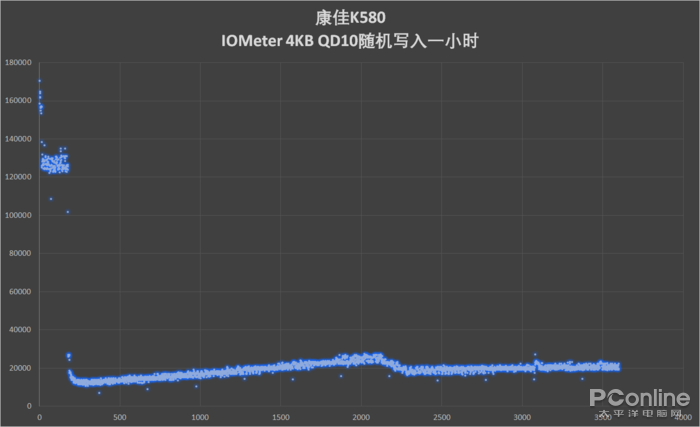 Can maintain a very high number of reading and writing IO in the first 200 seconds, and then from 200 seconds to the last 3600 seconds,Can maintain at more than 10000 times per second IO times, to meet the daily application of playing games and so on. 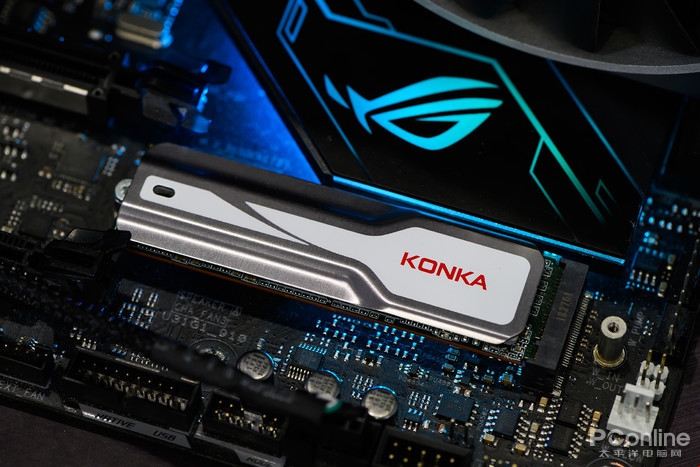 From the data point of view, Konka k580 can be regarded as a high-end solid-state, 3000mb / s sequential read-write, good temperature control effect, 5-year warranty, and the price close to 1 yuan / 1TB. 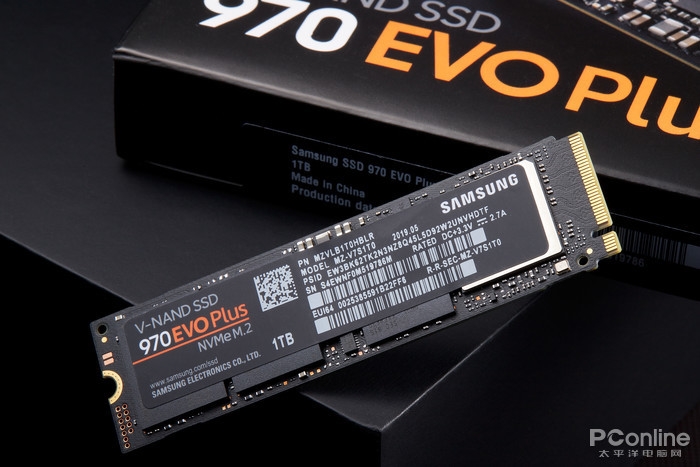 But Konka's k580 doesn't mean you have to buy it when you choose flagship solid state.

It's just that when you install the machine, there is one more option. Although the first impression it gives you may not be as reliable as that of the old brands such as Samsung and Western mathematics.

But I personally feel that Konka is seriously making products at least now, and it will be left time to verify its future, whether it will be plain sailing or continue to follow the old road of domestic production before.

Related news
Huawei self-developed SSD secret: the only domestic TOP10!
PCIe 4.0 SSD is unprecedented prosperity! Regret for not supporting it
Lenovo notebook mixed with Samsung and domestic SSD official response: general practice in the industry
Only MLC flash! Samsung shows PCIe 4.0 SSD 980 Pro
Developers say: after Baba is you became popular, how to play new games calmly?
Domestic SSD with Samsung particles! Is it cheating consumers or is it true to see the actual measurement
Hot news this week
AMD is licensed to continue to supply Huawei? Don't be happy too soon
Tencent responded to the Commerce Department's decision to continue communicating with the U.S. government for a long-term solution
Baidu opened the black technology conference to CCTV, the host sighed: liberal arts students understand
Us chip giant obtains supply license to Huawei: will abide by US law 100%
Is it worth buying from 7499 yuan? A picture to understand the glory Hunter Game v700: top performance, lightweight body
Lenovo announced that thinkbook New Youth creation book will be launched on September 24: support 180 degree reversal
Following Apple A14, Lu Weibing preheating millet new product: also 5nm
[Live Video] Apple's fall 2020 launch: two apple watch and two iPads
Amd CEO Su Zifeng will deliver keynote speech at CES 2021: sharp dragon 5000 APU is expected to appear
IPhone 12 pro's latest HD shape exposure: industrial design and color matching changed
The most popular news this week
Model3 test failed many times will dummy fly hot discussion! Tesla: Don't get out of context
The model 3 test failed many times, causing the dummy to crash into the air. Tesla responded that the video was taken out of context
Tesla "Battery Day" look forward: long life battery will eliminate fuel vehicles?
Samsung Galaxy S20 Fe has been first exposed in the video
Aaptiv, a fitness startup in New York, is seeking to sell with Amazon support
IOS 14 update rate reaches a new high: more than 25% of iPhone and other devices are upgraded in 5 days!
iPhone 12 See you in October :6.7-inch maximum screen with very little spare, buy is earn
Sony has suspended supply of CMOS cameras to China: applying for lifting the ban
Microsoft also brings voice search to Bing desktop experience
Blizzard Carnival will be held online in February: Dark 4 and Watch Pioneer 2 are expected to appea