According to foreign media the verge reported that the United States has given a deadline to ban tiktok, which is September 20. According to the latest regulations in the United States, the government will block all transactions with the parent company of tiktok on September 20 in an effort to "address a national emergency in the ICT supply chain.". 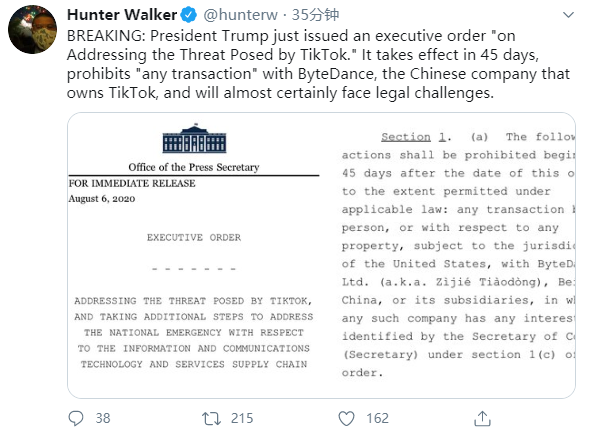 According to the report, the U.S. government authorized the International Emergency Economic Powers Act and the national emergencies act. In other words, tiktok's continued operations in the United States are called a "state of emergency.". 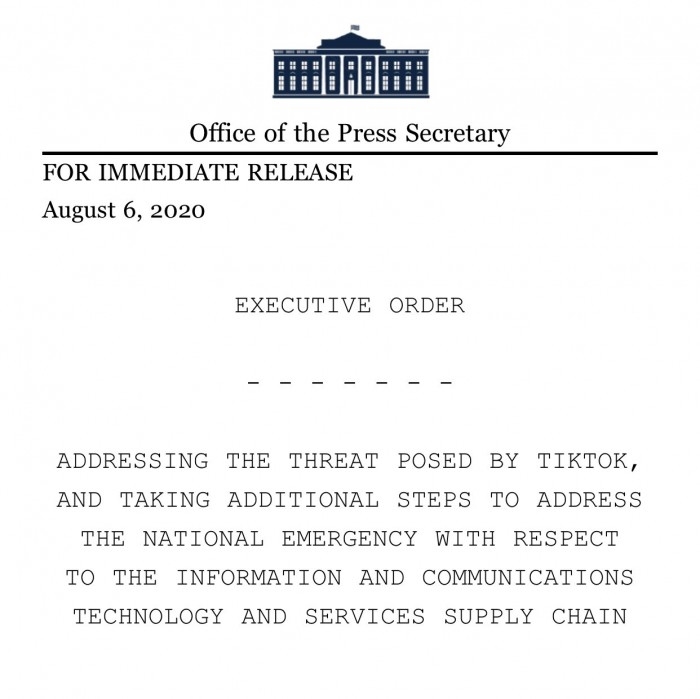 Some industry insiders have said frankly that such a move by the US government is very unusual and is likely to face legal challenges.

Related news
US space force
Google AR AI visual world cultural heritage microbeauty hologram (WIMI.US) digital display PK traditional model
How does Tencent's business influence in the United States behind the administrative order?
The overseas version of enterprise wechat has been renamed from wechat work to wecom
Tencent: existing wechat users in the U.S. may continue to use but cannot obtain new users, and will continue to negotiate
Change name to avoid ban? Tencent: wecom and wechat are different products
Has soared to 54,000 Wechat and downloads surged in the U.S. over the weekend
Hot news this week
AMD is licensed to continue to supply Huawei? Don't be happy too soon
Tencent responded to the Commerce Department's decision to continue communicating with the U.S. government for a long-term solution
Us chip giant obtains supply license to Huawei: will abide by US law 100%
IPhone 12 pro's latest HD shape exposure: industrial design and color matching changed
PS5、Xbox have cancelled the optical drive! Will the game disc die
As early as this Sunday, the US Department of Commerce banned the distribution of tiktok and wechat apps in US regional app stores
Huawei Chinese Academy of Sciences key EUV lithography machine? ASML Chinese Engineer: Arabian Nights
Tvos 14 still doesn't support 4K youtube, and users are confused
Apple didn't release the iPhone 12. Why isn't there a new iPhone for the first time in eight years? The reason has finally been found
Does Huawei's mobile phone price rise? We found the answer in Shenzhen Huaqiangbei
The most popular news this week
Feitian Maotai is 1000 yuan lower than the market price! Mao Tai also said there was no cooperation?
Looking for the original red capital! Ganzhou station of China Unicom's "ingenious network travel 2020" successfully ended
39 digit number rejected: wechat directly binds bank card without inputting card number
TSMC 5nm wafer cost exposure: Apple A14 and Huawei Qilin 9000 are not cheap
Huawei Folding Flagship Mate X2 Patent Plot Exposure: Full Screen Retention
Algerian currency printed on Chinese satellite "a Xing 1"
The construction scale of Tesla Berlin super factory has been expanded, and the main structure of three buildings has been formed
Tencent wins over physical plug-in manufacturers
The Linux 5.10 kernel is ready to support Intel DG1 audio output
proud! Chinese satellite a-xing-1 is printed with foreign currency