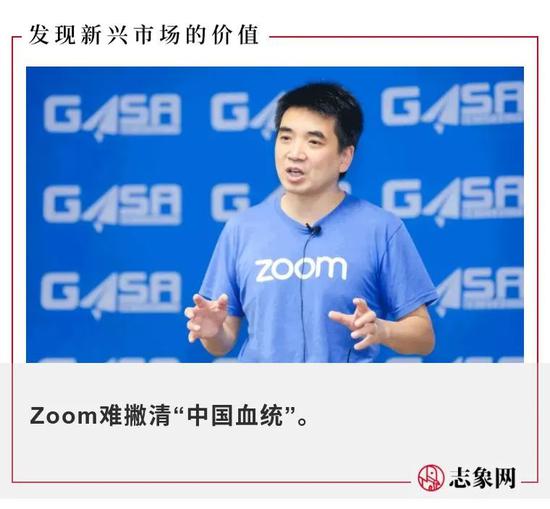 At a time when TikTok was banned and forced to sell U.S. businesses by India, another had

Although Zoom has embraced India, it has been repeatedly banned from the Indian market for privacy and data security issues. India's interior ministry has banned government officials from using Zoom services.

Zoom soon became popular in India with a 40-minute free video conference service for Indian users as a result of the 2020 new crown epidemic, which sent demand for online office and education soaring.

Zoom currently has offices in the Indian financial centre Mumbai and data centres in Mumbai and Hyderabad. Zoom said publicly that the next five years will continue to invest in the Indian market.

While Zoom focus on India, it is quietly ceding Chinese mainland markets to partners.

On 3 August, the Zoom announced that it would stop selling or upgrading new products directly to Chinese mainland users and would provide videoconferencing services only through third-party partners in the future.

Just as early as May this year, Zoom only allowed corporate customers to register in Chinese mainland, free users can not host meetings, but can participate in meetings initiated by these customers. 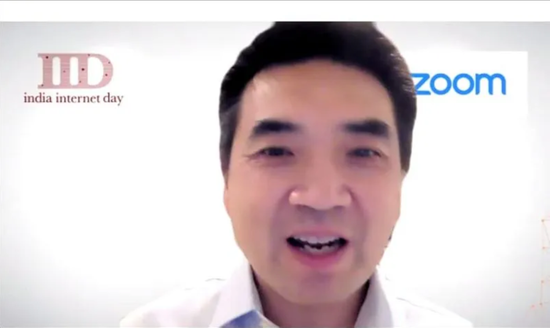 Yuan Zheng also shared Zoom entrepreneurial past at teleconferences. He left Cisco in 2011 to create Zoom. with 40 or 50 Cisco colleagues

WebEx is Yuan Zheng's previous creation of videoconferencing service platform, with PC access, and was subsequently acquired by Cisco. He tried to rebuild the platform, but it was very difficult.

Yuan Zheng offered to build a conference video system that can be used on smartphones, but Cisco did not approve the proposal. As a result, Yuan Zheng decided to leave Cisco Zoom. founding He said:

In 2011, Yuan Zheng and the team realized that video communication is a new tool in the Internet age and firmly believed that it will become the mainstream service in the future.

Due to the lack of similar products in the Indian market, many Indian institutions and schools have started to use Zoom videoconferencing services since March. However, due to privacy and data security issues, Zoom also frequently encountered blocking requests in India.

The Indian Trade Federation (CAIT) began using Zoom to communicate with state trade leaders on 25 March. Today, however, CAIT decided to adopt JioMeet, because it is a locally developed videoconferencing service platform in India.

On 22 May, the Supreme Court, citing privacy and security issues, requested a response from the central Government and the Zoom to ban the use of Zoom videoconferencing software. To this end, Yuan Zheng had to respond

CAIT asked traders and trade associations across the country to stop using Zoom as their communication platform and called for the use of JioMeet videoconferencing applications, India Today reported.

CAIT is the highest institution for about 70 million traders in India, and the CAIT research team, after an in-depth study, believes that using Zoom as a communication platform may harm national interests.

The BC Bhartia of the President of the CAIT and the Praveen Khandelwal of the Secretary-General stated:

The release of the JioMeet coincided with India's announcement of a ban TikTok、59 applications related to China, such as WeChat. Submitted by Modi

The # boycottchineseapps tag was widely distributed on Twitter, but Zoom wasn't on the list, so many users tweeted Zoom. banned 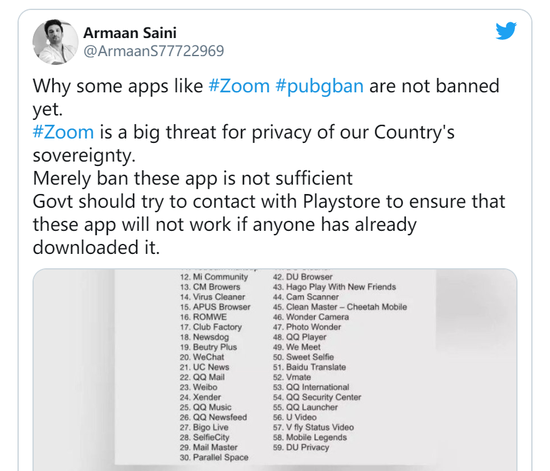 Recently, TikTok was banned by the Indian government for data security issues, followed by the United States demanding that TikTok sell its North American business within 45 days for endangering national security.

While TikTok was questioned, Zoom also faced an identity challenge, with founder Yuan Zheng's Chinese identity and some data centers in China being heckled by American politicians.

Nancy, Speaker of the United States House of Representatives, April

Zoom was also exposed in May as a security breach in which user videos were packaged and sold by hackers, revealing as many as 15000 videos. Hackers also broke into ongoing videoconferences and harassed participants.

After that, Yuan Zheng personally apologized and said he would enforce the use of conference ID and passwords in subsequent meetings to protect user privacy.

During the outbreak, Zoom revenue came mainly from the United States and Canada. But most of its R & D team is in China, and as of January 2020, Zoom has more than 700 R & D members in China, mostly concentrated in Hefei, Suzhou and other regions, and the cost of employment is only 1/3 of that of the United States.

Although Yuan Zheng has said several times that Zoom is not a Chinese company, it seems difficult to get rid of it