Novel coronavirus pneumonia was announced by the Trump administration at the end of July. It announced a $765 million financing agreement with the veteran film giant Eastman Kodak (Eastman Kodak), which will produce new crown pneumonia medicine raw materials for the latter. As soon as the decision was made public, Kodak's stock soared and a few lucky people got unexpected wealth.But a recent investigation by federal regulators into Kodak's alleged misconduct has put the financing agreement on hold and pushed Kodak's share price close to its original level. 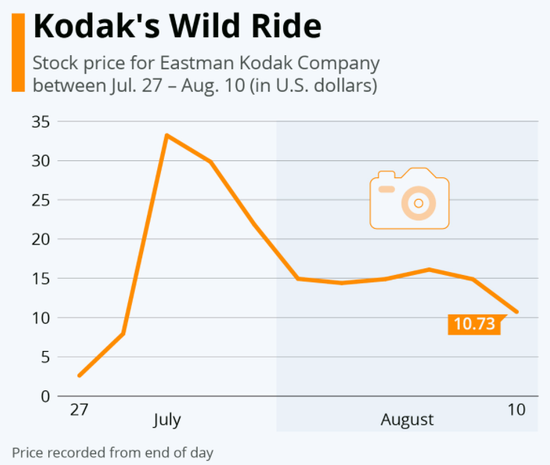 After the financing deal was announced on July 27, Kodak's share price soared from about $3 to $33 A share, up more than 1000%. After the initial rally, speculation about potential investigations opened a downward spiral for the stock, which fell from a high of $33. After the investigation was officially announced and the financing transaction was put on hold, the stock continued to fall to about $10 at present.

On August 4 local time, the U.S. Securities and Exchange Commission (SEC) announced an investigation into whether Kodak's information disclosure was suspected of violating the rules. The investigation is in its infancy, focusing on how Kodak can disclose its dealings with the government. The US International Development Finance Corporation (DFC) said that Kodak's $765 million pharmaceutical raw material loan agreement with the US government had been shelved because of "recent allegations of misconduct".