Orange Belgium, a branch of French telecom operator orange, announced on the same day that it chose to use Nokia's 5g technology in Belgium. The company said it plans to build a five- G network using existing infrastructure provided by Ericsson, while preparing to build a new five- G network service separately.

What's more, orange's rival, Belgium Telecom Company proximus, has made the same choice. According to the report, proximus will gradually replace Huawei's equipment with Nokia's in Belgium and Luxemburg, and support Ericsson to provide 5g core network services for it.

Huawei side has made a statement on the matter. "This is the result of the operator's organization of tenders and free market competition ." A Huawei spokesman said :" We support fair competition, the more diversified the supply chain, the more competitive ."

He added that Huawei had served the Belgian market for more than a decade and that that commitment would not change.

Orange Belgium is one of the largest local telecom operators and has a subsidiary in Luxembourg. According to its official website, the company has more than 3 million mobile network users in Belgium and Luxembourg, accounting for nearly a third of the total population in both countries.

Brussels, the capital of Belgium, is the seat of the EU's executive body and parliament, making Belgium a country of special concern to U.S. intelligence agencies, Reuters said. With the u.s. pressuring its allies on "national security" grounds to ban Huawei 5 G, eu members have stepped up their focus on so-called "high-risk suppliers. Analysts were quoted as saying it would subject Huawei technology and supply to scrutiny, and some European operators might be forced to remove them from their mobile networks.

"A deep-seated view is that Huawei should be pushed out ," one source said.

"Concerns about Huawei equipment capacity are also growing ," the source said. He refers to the decision of the United States to cut off Huawei access to important computer chips.

On October 1, Finland based Nokia announced that it had signed an important 5g device agreement with BT, the UK's largest telecoms group. 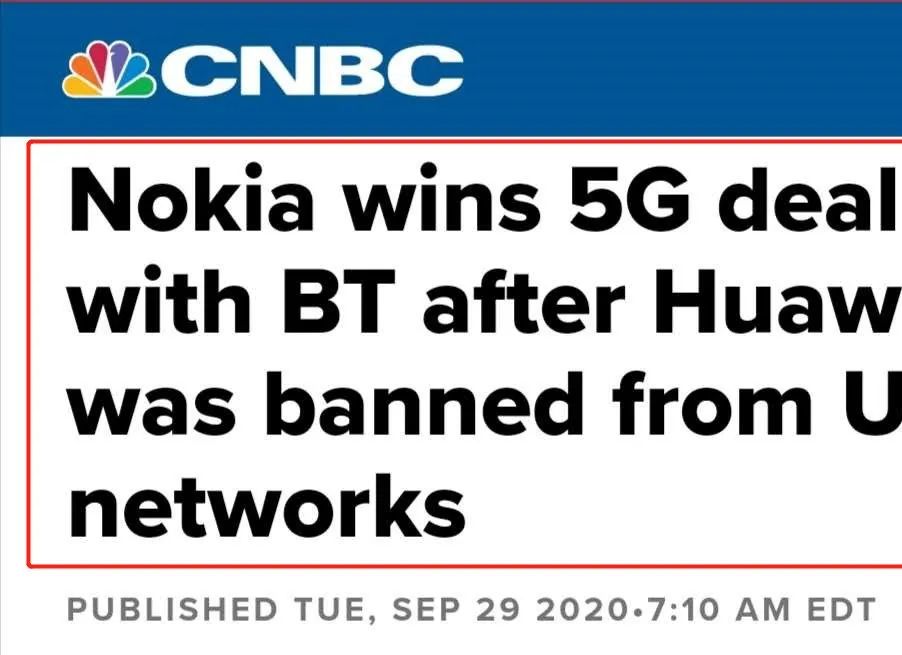 "Both of our companies have been working together for more than 25 years, and we offer top-notch networking services to people across the UK ," said Nokia President and Chief Executive PekkaLundmark Pekka Lundmark in a statement. "I am proud to be able to support BT's 5 G network development and look forward to closer cooperation in the coming years ."

Nokia said the agreement would make Nokia the largest infrastructure partner for BT, while industry sources told CNBC that Nokia would take up 63% of BT's network.

The British government announced in July that it had decided to stop using Huawei equipment in five G of construction and hinted that Nokia would replace the remaining infrastructure share of the UK's five G network. The British Minister of Culture, Oliver Dowden (Oliver Dowden), said the UK would stop buying new Huawei equipment from December 31,2020, and the Huawei equipment currently used in the UK 5 G network would have to be dismantled by 2027.

In an interview with Fox News Network in early August, U.S. President trump said that he had "tough talks" with British Prime Minister Johnson on Huawei, threatening to stop intelligence and other cooperation between the United States and the United Kingdom if the UK continues to push forward the 5g construction agreement with Huawei. 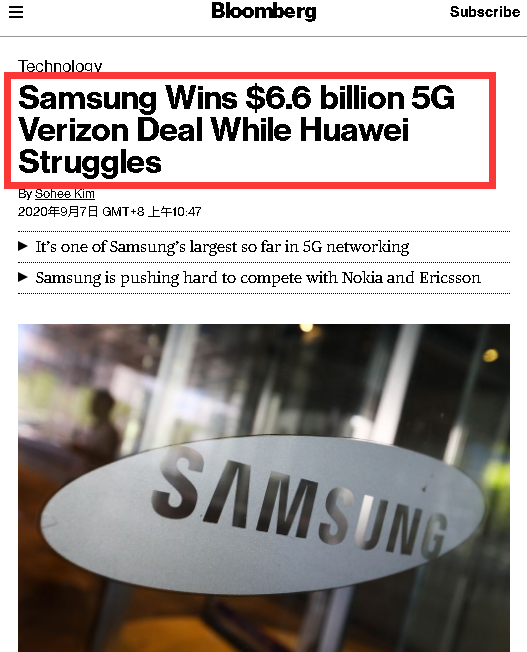 This is one of Samsung's largest 5g orders at present, and the transaction scale is equivalent to 3.43% of Samsung Electronics's 230 trillion won sales in 2019,.

According to regulatory documents, the contract was finalized on Friday and is valid from June 30 to December 2025.

"We are pleased to expand our long-term partnership with Verizon to advance its next-generation network. By virtue of this latest long-term strategic contract, we will continue to push the boundaries of 5 G innovation to enhance the mobile experience of Verizon telecom customers ." Samsung said in a statement.

Verizon said in a statement that through the latest long-term strategic contract, will continue to break five G of innovation to enhance the mobile experience of customers.

Foreign media analysis, because of Huawei sanctions by the United States, will even cause the global alliance to shut Huawei out, which will increase Samsung's market share.

Huawei will continue to supply some products

Under the strongest ban in the United States, Huawei's orders for goods preparation were one of the main drivers of TSMC's record high performance in the third quarter. After September 15, TSMC, which lost Huawei, also faces the problem of filling vacant orders. However, if TSMC can obtain part of Huawei's supply license, it will reduce the pressure on TSMC to fill the vacant orders to a certain extent, and allow the customer relationship between TSMC and Huawei to continue.

The above-mentioned people also pointed out that the US Department of Commerce will not completely block Huawei, but if problems such as mobile phone processor chips and base station chips cannot be solved, Huawei, which has lost its pillar business, will still be unable to recover.

Related news
Orange opts for Nokia and Ericsson to deploy 5G network in France Commercial services are expected to be launched this year
Orange Belgian company will abandon Huawei equipment and switch to Nokia
Hot news this week
"Sheep a sheep" fire, is expected to attract hundreds of millions of financing? But it doesn't have a license...
The first "zero carbon factory" in the ICT industry, Lenovo (Tianjin) Smart Innovation Service Industrial Park is officially put into production
Baidu Ping Xiaoli: The repurchase rate of users on Baidu App reached 60%, and the daily inquiries exceeded 4 million
Billions of euros in investment, Intel Italy chip factory will be located in the Veneto region, sources said
"Sheep a sheep" the whole network burst fire! The founder was the Alma mater system of exhibition card publicity
Huawei Mate50 is on sale: Kunlun glass version is difficult to find, the maximum price increase of the Porsche series
Tencent Music back to Hong Kong behind: online music "internal volume" intensification, short video will become a new growth rate
Intel failed to deliver on its promise: Summer is over and there's still no high-end, flashy desktop graphics cards
Xiaomi Civi 2 Stable Snapdragon 7:23 87mm2 Large-area VC liquid cooling, heat dissipation increased by 200%
"Look at the weather why do I need to renew membership"? Inkblot Weather membership service is a hot topic
The most popular news this week
Huawei Smart Screen portable version released: 10.4-inch 2K screen, 10995mAh battery
The world's first 6GHz frequency Intel high-profile announcement: the lead is indisputable
Do you have the opportunity to take noise -canceling ear to damage the hearing? Experts from the Three Hospital said that
Jump ticket 2 years "pigeon king"! Avx-512 is publicly supported for the first time in the Intel 60 core
I can't afford to live without Musk's help
Mobile phone fast charge new volume king Xiaomi three new machine into the network: the highest 210W?
Secretary -General of the Federation of Federation: Foreign artificial artificial Chinese online red cars have great advantages in China
Do you want to travel to space? Aerospace expert: China already has technical conditions
The strong response to the iPhone 14 Pro Max could widen the gap between the iP15 Pro series
Intel's Arc A7 flagship graphics card debuts in private: Just these two