Is the semiconductor industry going into the integration period?

The wall street journal quoted a person familiar with the matter late thursday as saying AMD was in deep talks about buying Xilinx ling, a maker of programmable logic devices, which could be worth more than $30 billion. Searing's shares rose 14.11 percent, while AMD fell 3.94 percent.

As artificial intelligence ,5 G、 the Internet of things and other areas of semiconductor demand, the industry has entered a cyclical boom. The giants, all eyes fixed on the next era.

what do AMD want?

Xilinx is the leader of FPGA (field programmable gate array), with a share of more than 50%. This established semiconductor enterprise in 1984 is the inventor of FPGA and the first fabless semiconductor company in the world.

In 2019, Q2 ranked sixth in the global fableless manufacturers, only one lower than AMD.

The FPGA is semi-customized, the design and development cycle is shorter, and the marketing speed and process can be faster than the dedicated integrated circuit ASIC because there is no

Syrinx, based in San Jose, California, makes programmable chips for data centers to speed up tasks such as artificial intelligence work and 5g Telecom base stations.

At present, the construction of 5g infrastructure, cloud server and artificial intelligence chips, which are hot fields, need to be built based on FPGA, and the importance of Xilinx is self-evident. For example, Huawei is one of the big customers of Xilinx.

At this point, you should also understand that AMD want this deal, directly into the market that Intel firmly controls. The deal is significant for AMD, probably the biggest deal the semiconductor company has had since it acquired ATI in mid-2006.

The epidemic has ushered in a brief return to the PC market, but both inside and outside the industry clearly know that this is only temporary, PC is still the sunset market, AMD light is not enough now, but also need to find the future imagination space. And data center, server market is that answer obviously, grow rapidly, industry space is huge.

Server field, Intel is still the dominant, for this To B market, stability, customer development and maintenance are lessons, AMD will be difficult to shake Intel for a while, AMD is still a backup or supplementary choice, but AMD have begun to catch up.

AMD server market share grew from 1 percent to 8 percent from 2017 to 2019, CEO August this year, as AMD took large orders from Amazon and Microsoft 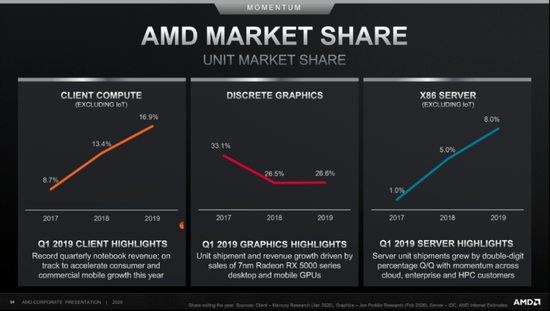 In 2016, Intel spent $16.7 billion on Altera, purchase And the latter FPGA second in market share, Then Intel blended its CPU with FPGA very successfully, Apparently it put a lot of pressure on AMD, Slower pace, You may lose the chance to catch up forever. In January, AMD also dug up the former Intel senior vice president, head of FPGA division Dan McNamara.

Intel's acquisition Altera, avida wanted to swallow Arm, and to play with cyling is AMD response. The future semiconductor market would be intel Altera、 nvidia Arm and AMD and sirex if both acquisitions were made.

However, even if amd successfully acquired Xilinx, the impact is difficult to be reflected in the short term. After all, Intel's advantages in the server field are too stable. What amd really wants is to enter 5g, the Internet of things, automobiles and so on. In the past, amd had almost no business layout opportunities. It is a ticket to the next era.

Now is the best time?

Since this year, AMD market value has soared more than 80%, market value has also exceeded 100 billion ,2019 operating cash flow and free cash flow have reached a new high since 2007, and with the new mainframe and other businesses driven, Revenue will remain high in a short period of time.

What's interesting is, When Intel's plans to buy Altera came out in 2015, there were rumors that Sellings planned to buy AMD counter-attack. In just a few years, the buyers and sellers moved in AMD to turn over.

Another background is that because of the ban, Sellings has lost many Chinese customers like Huawei, which has hit its performance. According to reports in february, mr. selings made the latest round of layoffs, widely believed to be linked to a government ban on Huawei.

From a financial point of view, this may be the best time to buy. At that time, amd acquired ATI because it was forced to acquire ATI when the financial situation was not sufficient. As a result, the company entered a financial crisis, was heavily in debt, and laid off workers continuously, which failed to make the acquisition play its due effect. At present, AMD's situation is much better than it was a decade ago.

However, financial health is only a necessary and inadequate condition. Although it may not have the same influence as arm's acquisition, AMD will still face many obstacles if it wants to successfully swallow Xilinx.

For example, Nvidia and Arm, not only in the face of regulatory pressure, industry competitors also opposed. Many sources, including Intel, Qualcomm and Tesla, have opposed Nvidia's Arm acquisition and plan to express their concerns to U.S. and global authorities, foreign media fudzilla reported.

Whether the regulatory authorities can let go, whether competitors will step in, and, most importantly, whether Xilinx will agree to this deal are all the issues that are in front of us.

In short, given their respective positions in the industry, this is still a far-reaching acquisition of the industry. The semiconductor industry has entered a Related news
It is said that AMD plans to buy Xilinx for us $30 billion, and the agreement can be reached as soon as next week
Amd wants to invest money to buy Xilinx: semiconductor industry enters harvest period
Amd wants to invest a lot of money to acquire Xilinx? This year's semiconductor M & A
Amd also wants to invest money to buy semiconductor industry into harvest time?
Money Spells to Attract Money Instantly +27836633417
+2349025235625 I want to join occult for money
+2349031459947 %%π¶ I want to join occult for money ritual
BUY SUPER HIGH QUALITY FAKE MONEY,CLONE CREDIT CARD ONLINE.
@@+2349022657119.. I WANT TO JOIN OCCULT FOR MONEY RITUAL IN
Hot news this week
Too many questions! Apple has changed the timing of the official release of iOS 16 series
Monkey acne cases have ranked first in the world that the United States has announced the emergency state of public health
Tencent and Logitech cooperation of the cloud game console Revelations: equipped with Android system configuration is low
Credit card points rule intensive adjustment online transaction points more "valuable"
High reserves and low cost experts: calcium ion batteries replace lithium batteries to stand up to the daily
Alibaba executives interpret financial results: the focus of the consumer side is no longer to attract new, but to do a good job in stratified operation
Losses in a single quarter of $ 23.4 billion a record, SoftBank did not carry the plunge of technology stocks and the devaluation of the yen
Sources say Samsung's Galaxy Z Fold4 is going up in price: a 512GB top unit will cost more than 13,000
The prevention and control of the American Monkey epidemic has failed. What should I pay attention to?
Is the micro -business headache? WeChat friends are suspected to have a big move: 7 can only be posted a week
The most popular news this week
After selling Tesla for $6.9 billion, Musk said he was not selling it, but a survey said he was still selling it. The title of the world's richest man may not be guaranteed next ye...
Distributed database OceanBase announced 4.0 product release, single -machine deployment performance is super mysql
The three major indexes of the US stocks opened sharply: ROBLOX fell more than 4%, Twitter and Tesla rose more than 3%
Japan has confirmed that China has overtaken the US for the first time in the world's top three indicators of scientific papers
A wake-up call for Apple? Foxconn says it is feeling the sting of slowing demand for smartphones
Joining Chip Alliance could serve as bridge, says South Korean Foreign Minister
Joe Biden also mentioned Chiplet? An unexpected A-share buzzword in A White House briefing
Nio Li Bin responds to mobile business rumors: This should be the definition of other people's imagination to us
Amazon is pushing a feature called "swipe to pay" that scans your palm to pay in seconds
Text message color, picture quality compression! Google calls out Apple for improving cross-device messaging