One of the most popular shops in the Arctic

According to media reports, Xiaomi recently announced that,It has opened its first specialty store in the Arctic Circle, which is also the northernmost millet store in the world.

It is reported that,Located in molmansk, Russia, the store covers an area of about 80 square meters, and sells a series of millet ecological chain products, including smart phones and various smart hardware. It has become one of the most popular shopping places for local residents。 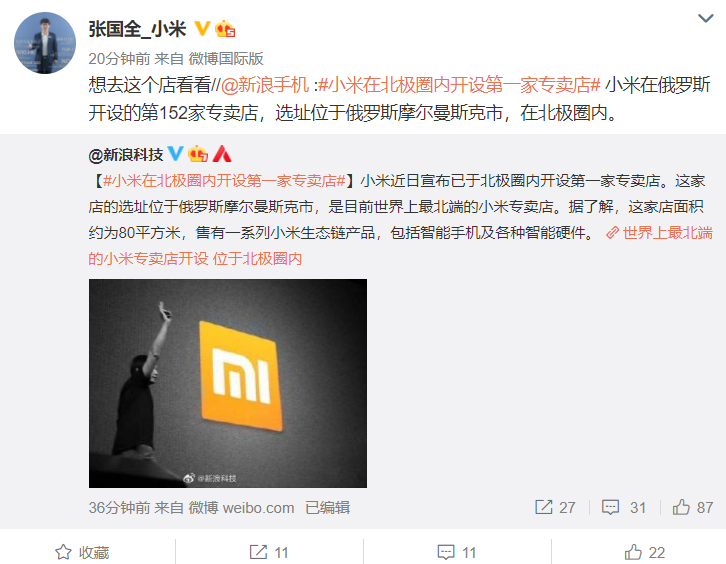 This is Xiaomi's 152 store in Russia.Previously, Xiaomi signed a cooperation agreement with the retail group invent retai group, which is expected to open another 60 Xiaomi stores in Russia in the next few years.

According to the data,Mormansk City, also known as the ice free port, is the capital of Russia's Murmansk state and the largest port city along the Arctic Ocean coastlocated northeast of the Kola Peninsula on the Kola Bay of the Barents Sea. Owing to the effects of the North Atlantic warm current, although located at latitude 69

Related news
Apple registered multiple Apple One" domain names before Tuesday's launch
Hot news this week
Overseas sales of Chinese bicycles are crazy: nearly 16 billion yuan worth of exports have been ordered to the end of next year
IPhone 12 screen green: I choose not to forgive it
Only mobile phones can charge quickly? Huawei matebook X's dexterous and fast charging liberates your endurance anxiety
Lottery mode will be opened: it is reported that apple is looking for Samsung OEM M1 TSMC 5nm orders, accounting for only 25%
Panorama of China's AI chip financing in 2020
China Mobile Partner Conference is coming. It's so simple to start 5g life
Improve the efficiency of diagnosis and treatment, improve the experience of medical treatment Baidu health won the "2020 Best Health Platform Award "
Flagship stores can't sell Shanzhai pinduoduo crazy bad money manufacturers are destroying the ecology
The report says the world's largest producer of plastic waste is the United States: serious environmental damage
Xiaomi's "iron hoof"
The most popular news this week
Apple began to use its tiktok account to promote the iPhone 12 Mini
Huawei phone 256 GB full of space overnight: Tencent microvision ate
Samsung Galaxy S21 protection case to be released
Are the elderly abandoned by the Internet? Alipay: elders can try the "care version".
India's 4th ban on Chinese apps: 267 apps in total! Alipay didn't run away either.
Tesla's share price soared as Musk became second-richest man who blew up the material at the European Battery Conference
Cancer cancer vaccine may be coming: the United States has approved human trials
China Film Golden Rooster Award Opening of Xiamen Nov.27 with Huawei to launch the "New Image Mobile Film Project"
Relying on volume and ecommerce Xiaomi to return to third place in the world, it still wants to get rid of the middle and low end image
Using Tesla's same cobalt free cell, Yubo released 80000mah outdoor power supply