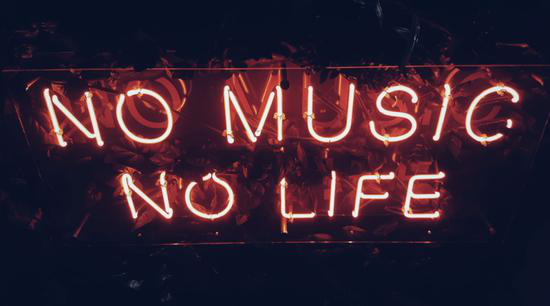 In a few days, Zhang Chu, who is sitting on a chair in Hong Kong's Hung Hom and singing "it's shameful to be alone," will be 52 years old. But Zhang Chu is still singing. His latest album, released at the end of July, has a less rock and roll name, self-confidence.

In the album's song of the same name, Zhang Chu sang:

This is the confession of a musician. Zhang Chu and his rock music, as well as the whole Chinese music industry behind it, have experienced crazy and brilliant, but also experienced a long period of low tide. Today, this long-standing musician has begun to sing for a better future.

Belongs to the musician and the Chinese music industry good time, finally came back. Tencent Music and Entertainment Group

In the third quarter, Tencent music achieved a total revenue of 7.58 billion yuan, a year-on-year increase of 16.4%, and the net profit attributable to shareholders under non IFRS was 1.35 billion yuan.

More and more people listen to songs, more and more people are willing to pay for music. Digital music platforms such as Tencent music are also entering a period of rapid growth from the long-term construction in the past. This points to the arrival of the long-awaited golden age of digital music, Zhang Chu's

From the era of piracy, the collapse of the record industry, the barren content of music, to the prosperity of today. How is the reconstruction and outbreak of the music industry completed?

Tencent music's quarterly financial report is a dimension to observe the changes and evolution of digital music industry.

Among them, a particularly noteworthy data is that the number of online music paying users has reached 51.7 million, with a historic breakthrough of 50 million. This number not only reflects the growth of Tencent music as an enterprise, but more importantly, it is a unique milestone for the music industry.

The music industry has been stagnant for more than ten years. One of the most important reasons is that after the deconstruction of the traditional record industry, the new order has not been established, and it is difficult for music industry practitioners and musicians to get positive feedback.

In the era of traditional record industry, record companies have set up a complete industrial chain from producing music content to realizing monetization, including the excavation, cultivation and creation of artists, as well as the realization forms of making records, receiving advertisements and holding concerts. However, at the beginning of the 21st century, when the Internet is booming rapidly, the music industry is threatened by piracy. For a long time, the record industry chain based on record sales is in jeopardy. The output of musicians and record companies can no longer recover the corresponding returns, resulting in the vitality of the whole industry.

Musicians and participants have no decent income, not enough energy to build content, and the decline in music quality continues to drive consumers away. In the chaos of the music industry, everything fell into a vicious circle. 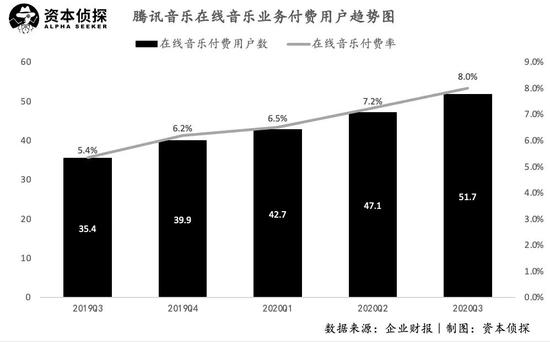 It is not easy to achieve this result: it needs many factors, such as copyright environment, content value, distribution mechanism and consumption habits.

In the process of deep data mining, we can find more points worthy of attention from the composition and trend of revenue structure of Tencent music.

This change of revenue structure is closely related to the development of digital music industry. In the early stage of digital music development, it is also the period when the traditional record industry chain was disintegrated and the users' legitimate consciousness was the weakest. The improvement of copyright environment was not a overnight achievement, but the problem of realizing the music industry was hard to solve.

The combination of social entertainment mode and digital music was born in this background. Tencent music in the initial stage of innovative social entertainment model attempt, this model of high payment rate, high ARPPU characteristics, effectively solve the digital music industry in the early commercialization dilemma, Tencent music into the construction of music content to provide sufficient ammunition.

More gratifying is the growth of online music business revenue scale and liquidity. This means that after long-term efforts and construction, digital music has gradually passed the stage of external blood transfusion, and completed the real self-renewal.

In the third quarter, the liquidity of the online music business also increased further, with online music paying users reaching 51.7 million, up 46 percent from the same period last year. Net growth of 4.6 million, the largest single quarter since 2016. At the same time, the online music service payment rate rose to 8.0, monthly ARPPU to 9.4 yuan.

In the third quarter, Tencent Music achieved total revenue of 7.58 billion yuan, an increase of 16.4 yuan over the same period last year.

In the third quarter, Tencent music achieved a net profit of 1.35 billion yuan attributable to shareholders under non IFRS, an increase of 9.3% year-on-year.

Behind the growth of data, the deep changes in the music industry are worth exploring.

Tencent music is a representative company in the digital music era. Its performance indicates the overall trend of the industry to a certain extent. The increase of users' payment rate and profitability means that the new order of digital music is gradually taking shape, which benefits from the efforts made by the music platform in mining users' demand for music and re cultivating their payment habits.

The deeper logic is that after the impact of piracy on the record industry, users' links to consume genuine music are broken, and their willingness to pay for music is missing. As a result, the industrial chain is disintegrated, and the lack of capacity of these record industries in the era of digital music is gradually complemented by music platforms.

Therefore, the outbreak of Tencent's music performance data represents the company's ability and even more represents the commercialization of digital music on the right track, and the music industry has finally ushered in an era of healthy development.

The result of the industry recovery is a system remodeling involving the industrial chain, which involves two major elements: one is the content ecological construction, the other is the construction of business model, and the two are cause and effect each other.

In the process, as an important digital music platform in China, Tencent music's series layout and attempt is a window to observe the industry restart.

Tencent music and traditional record companies in recent years, the network of cooperation is increasingly large, this year to now, the new cooperation and renewal of the international record companies have reached a cumulative total of more than a dozen, such as Universal Music Group, Kobalt Music、Cooking Vinyl、Genie Music、GMM Grammy and other first-line record companies. Just this month, Tencent Music, which has added one of the world's top 10 music copyright companies peermusic、 the largest independent music copyright company in the United States The Royalty Network, also announced a Merlin Network renewal with the world's largest independent music digital copyright alliance. Users can directly touch through the digital platform of authentic music content is increasingly rich.

With the diversity of user preferences, today, the platform's mining of niche and emerging content has also become the focus of investment, such as from popular variety arts, animation series mining more in line with the favorite content of specific circles, and the inclusion of long audio into the content pool to enrich user choice, Tencent music to promote content diversification, in April this year, Tencent music announced the preparation of billions of financial support

With the efforts of various parties, the once barren music content ecology gradually reappears its vitality, which is the basis of the music industry's rebirth from the ruins.

During this year's epidemic, Tencent music launched TME live, which broke the boundary of online and offline music and increased the expression of music content in combination with the development of live broadcasting technology and the change of consumption habits. Judging from the existing cases, this innovative form has been recognized by users and the industry. Many online concerts have had a hot effect. Famous singers such as Eason Chan, may day, Liu Ruoying, Zhang Liangying, Lin Junjie, Andy Lau, Jessie J and other famous singers have joined in and presented wonderful performances. 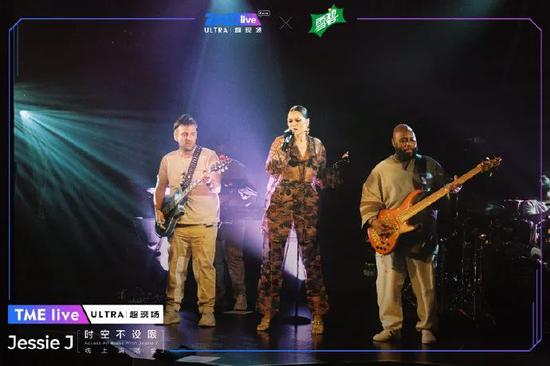 With good content, how to reasonably realize its value is a more critical step.

After pushing the industry into the era of legalization, what Tencent music needs to do is to combine the communication mode and user characteristics of the digital music era to complete the connection between music content and users, which is embodied in the propaganda ability of the platform.

At the publicity level, Tencent music has made a lot of innovative attempts, such as building a music community, creating a good communication atmosphere, and interactive playing methods of stars and fans. It not only brings fans one-stop experience of listening to songs and chasing stars, but also provides a one-stop publicity service from the release of new songs to the interaction of fans. Therefore, it has gradually become the focus of digital album publicity for musicians.

In addition to the ability of publicity, it is also an important exploration to help the industry to establish a positive cycle in the digital music era.

At the beginning, Tencent music as the representative of the digital music platform, music as the core of online music social entertainment dual-wheel-driven model exploration, which laid the foundation for the industry to establish a positive business cycle.

From the product matrix arrangement, Tencent music has four major products: QQ music, cool dog music, KuWo music and national karaoke, which can be divided into online music service and music centered social entertainment service. The products mainly carrying social entertainment business are national karaoke and kugou live broadcast, which are realized in the form of virtual gifts and value-added members. This is an innovative attempt of Tencent music in the digital music business model, and also breaks through the commercial dilemma of music streaming media profitability to a certain extent.

On the basis of the two wheel drive model, Tencent music has been constantly innovating products and exploring ways to match the digital music era. Digital music album is a typical representative. This innovative form has activated the commercial value of music in the digital era. This year's new TME live is also the embodiment of the key links of the traditional record industry online. These layouts have improved the industrial chain of online music business and provided help to accelerate the development of the industry.

Only in the past few years can music content, which has been paid for by users, resonate with the music industry in the past few years. The performance of Tencent music shows that the virtuous circle of content and commercial composition has been produced. Tencent's ability of content construction and commercialization has opened the engine of positive circulation and development of music industry.

The emergence of diversified and high-quality content, continuous growth of user data, and perfect commercial links all indicate that the music industry is booming again after a decade of low tide.

A new wave has come.