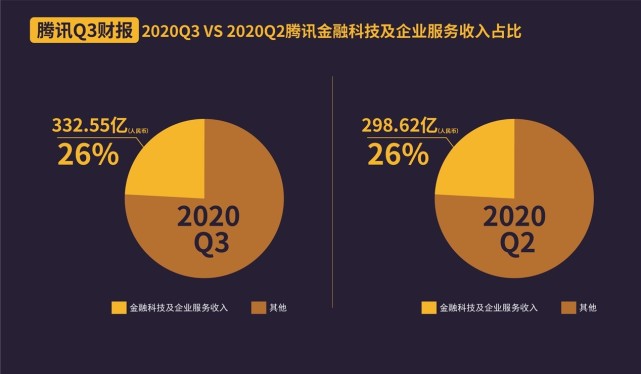 This year is the tenth year of Tencent's in-depth to-b business. Under the test of epidemic situation, Tencent to B plate showed strong anti risk ability. The financial report pointed out that during the reporting period, the demand for PAAS solutions (especially security related PAAS) of financial, healthcare and Internet service customers was growing.

In addition, Tencent takes the lead in the layout of office SAAS and upgrades the SaaS toolkit for enterprise productivity, which includes three landmark products, including enterprise wechat, Tencent conference and Tencent documents. Among them, Tencent conference, a video communication solution, has more than 100 million registered users, and the number of enterprise wechat active accounts has increased by more than 100% on a year-on-year basis.

After ten years of development, Tencent cloud has successfully ranked among the top 5 cloud computing vendors in the world. According to the enterprise public cloud service market share report released by Gartner, in the IAAs market, Tencent cloud's global market share in 2019 increased by one place compared with that in 2018, ranking the fifth in the world.

On September 3, Tencent cloud was selected into Gartner Magic Quadrant. This is the first time Gartner comprehensively evaluates the service capabilities of cloud computing vendors from two dimensions of infrastructure and platform services, which means that Tencent cloud IAAs and PAAS product capabilities have entered the world's top rank.

Affected by the epidemic this year, digital transformation and upgrading has become a common demand of all industries. The use threshold and purchase cost of lightweight SaaS service are relatively low, and the demand and value are prominent.

Tencent takes the lead in the layout of enterprise level office SaaS to capture new opportunities in digital transformation. According to the financial report, Tencent conference, a video communication solution, has more than 100 million registered users, and the number of enterprise wechat active accounts has increased by more than 100% on a year-on-year basis. At the same time, Tencent will further integrate the cloud document processing tool Tencent documents with other Tencent products (including QQ, QQ browser and CRM SaaS products).

In order to enable service providers to better help small and medium-sized enterprises to make digital transformation, enterprises' wechat provides a variety of cooperation modes for partners to choose, providing more assistance for partners from the aspects of capability, scheme, hardware, service, sales, etc., so as to jointly serve enterprises. As of May this year, millions of enterprises have provided services to 250 million wechat users through enterprise wechat.

In addition, Tencent has also covered more than 80 industries, such as education, finance, industry, government affairs, medical care, and so on, providing digital customer operation programs and services to more than 100,000 enterprises and connecting tens of millions of customers.

During the epidemic, Tencent cloud showed the ability of rapid incubation and innovation of b-end products in the face of new business forms and new models in response to various digital needs. Tencent Conference team responded quickly, and it has been iterating more than 20 times in 100 days of online operation. In 8 days, 100000 cloud hosts are expanded and the function upgrade under the new scenario application is completed.

Tencent conference not only improves the organizational efficiency of enterprises, but also helps all walks of life to reduce operating costs and save social resources. According to a report released by the Internet Development Research Center of Peking University, Tencent directly saved 71.4 billion yuan in social costs from January to May this year.

As the external window of to B business, Tencent cloud goes deep into all walks of life, providing power for the digital upgrading of industry and high-quality economic development. Regarding the industrial Internet as an important strategy in the next decade, Tencent is also continuously increasing its investment in digital economy infrastructure.

In the future, Tencent will set up large data centers in Jiangsu and Hebei to further meet the strong demand of cloud computing resources for digital transformation and upgrading of regional industries in South China, East China and North China.

In the field of AI, the Research Report on China's artificial intelligence cloud service market (2019) released by IDC, an international data company, shows that Tencent's cloud AI public cloud market share ranks among the top three in China, and the number of face recognition API calls ranks first in China.

In terms of 5g, it is expected that by the end of this year, Tencent cloud will complete the construction of 300 5g edge computing nodes, fully supporting the development of Tencent's smart industry, parks, energy, education, car service, cloud games, 4 / 8K live broadcast business and robots.

The API of cloud original product has been used more than 10 billion times a day, with more than 1 million developers and serving more than 500000 customers. Tencent cloud has actually become the cloud native platform with the largest number of service developers in China.

Multiple re insurance projects have been completed, and cloud business has accelerated benchmarking

During the epidemic period, users' use time of Internet applications increased, which led to the increase of the overall cloud consumption of the Internet industry. In the Internet industry, Tencent cloud has significant advantages: at present, it ranks first in the market share of e-commerce public cloud services, serving more than 70% of domestic game companies. In the video industry, Tencent cloud has a market penetration rate of 90%.

As a representative of the digital economy, during the reporting period, Tencent continued to strengthen the construction and investment of digital infrastructure, give full play to the advantages of C2B under the normalization of the epidemic situation, and the industrial Internet also continuously released new economic momentum and social value.

In February this year, Tencent cloud won the bid for the seventh national census project and cooperated with the enterprise wechat to provide technical support. The census was officially started at 0:00 on November 1. For the first time, the paper form registration was changed to electronic registration. In the process of information collection, input and data calculation, the census efficiency was greatly improved, and human and material resources were saved.

This year, in the epidemic situation, the Canton Fair also ushered in innovation

Through a number of major projects to ensure landing and successful implementation, Tencent Industrial Internet continues to explore in depth

In the financial field, Tencent cloud service has more than 10000 customers, covering more than 150 banks, dozens of securities companies, insurance, more than 90% of licensed consumer money, and many pan financial enterprises.

Related news
Tencent's Q3 online game revenue is 28.6 billion: a year-on-year increase of 11% in mobile games
Behind the growth of Tencent music's Q3 performance is the surging new wave of music
Tencent Q3 financial report: Tencent conference users exceeded 100 million, cloud business accelerated benchmarking
Tencent Q3 quarterly report chart: game revenue 41.4 billion, up 45% year on year
Hot news this week
The developer of the dating app Tinder has reached an agreement with Google over billing rules for its app store
Still did it! Canada has banned Huawei and ZTE from participating in the country's 5G network on "national security" grounds
Red Elf Lightning erupts in the Himalayas Spectacular Spectacle: Experts Reveal What Exactly Is This?
The founder of the Internet Quick Hand Su Hua was taken away for investigation, and the fast hand responded: the news was not true
Wang Xiang, president of Xiaomi, explained that a shortage of low-end chips is a major challenge in overseas markets
Or for Studio Display Pro, the release of Apple's 27-inch Mini LED-backlit Display has been delayed by October
Tencent Q1: The business service business has "slightly decreased" year -on -year, and resource centralized video cloud and network security | View financial report
One picture to understand! Blue Factory has issued 3 new machines in a row: self-developed chip blessing, the narrowest lower border
Sony released the active noise-canceling headphones WH-1000XM5, equipped with 2 chips and 8 microphones
Tencent established a smart technology company in Chengdu, and its business scope includes Internet data services
The most popular news this week
How does the Internet make People Copy each other
Fed Vice Chairman: The future digital dollar may complement the coexistence of stablecoins and commercial bank currencies
ZHANG Pingan, CEO of HUAWEI CLOUD: The value of data governance in China has not been fully tapped Data and AI should be accelerated
Shenzhen Atmosphere! The sales price of mobile phones, computers and other products is subsidized by 15%
Microsoft shows third -party components: Win11 chicken rib function is saved
No need to grab it! Sony announced an increase in PS5 shipments
Audi advertising poster photos only sell for 8 yuan? Photographers question the unreasonable use of the photo purchase
Twitter spent $150 million to settle privacy and security lawsuits with the U.S. government
Hong Kong Hang Seng Index Opens 0.5% Baidu Hong Kong Stocks Open More Than 2%
Amazon's new CEO participated in a shareholders' meeting for the first time: to restore normal profit, ready to cut off the excess warehouse