In the morning news on November 20, ifixit, a famous dismantling organization, brought the dismantling of MacBook Air and MacBook Pro equipped with apple M1 chip. The internal design of these two M1 Macs is basically the same as the previous Intel models, but there are also some highlights. 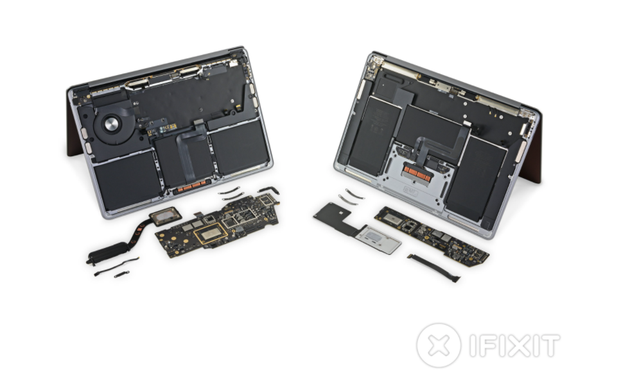 First of all, let's take a look at the MacBook Air. The biggest change of the MacBook Air equipped with M1 chip is the fan less design. Under the heat dissipation material on the left is the SOC chip, which may export heat through the d-side metal. The original fan has been replaced by an aluminum expander on the left side of the motherboard.

Fanless design is the biggest change

With the exception of the new motherboard and radiator, the interior design of the MacBook Air is almost the same as the previous product. Ifixit said the maintenance procedures "may remain almost completely unchanged.".

However, ifixit is still concerned about the MacBook Air fanless design, which may prolong the cooling time of the fuselage, and the stability of continuous output high performance is a hidden danger.

As for the MacBook Pro, since the appearance is almost the same as the previous model, ifixit joked that it had to be checked carefully to avoid removing the wrong machine.

13 inch MacBook on the right

The internal changes of the MacBook Pro are less than those of the MacBook Air. Ifixit is happy to see that there are no major changes within the MacBook Pro, which means that some parts can be used with the previous generation of products, greatly reducing the maintenance cycle and cost.

In the previous media evaluation, the excellent heat dissipation of MacBook Pro with M1 chip left a very deep impression on the media, and the fan could hardly hear the sound in operation.

Ifixit is also curious about whether macbook pro's fans will have any unusual design or new cooling technology. 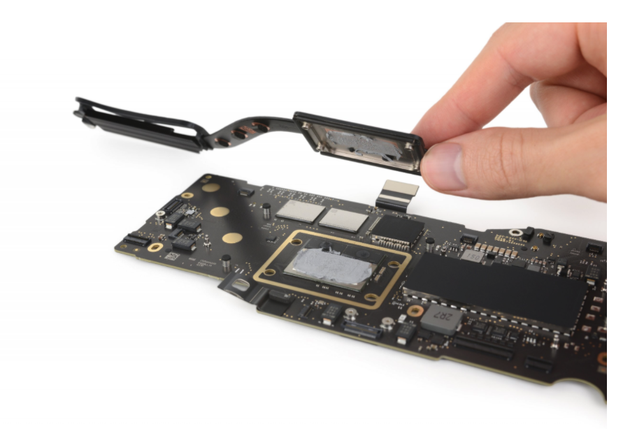 The fan is the same as the 13 inch Intel version

As a result, the fan design of the M1 MacBook Pro is exactly the same as the 2020 Intel version of the 13 inch MacBook Pro. Obviously, the M1 chip is excellent, and there are no other factors. 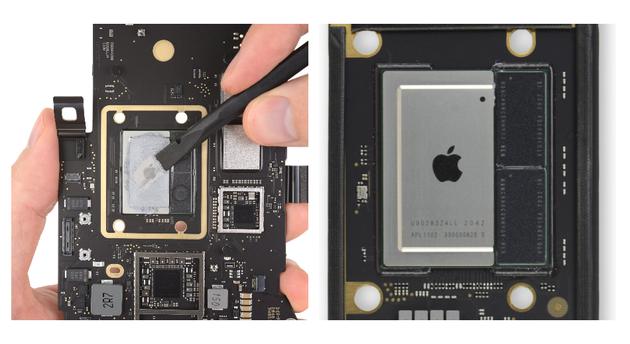 Both products are usedAppleM1 chip

Ifixit also points out that although the internal structure of the MacBook Air and MacBook Pro is almost the same as the Intel version, they do carry the bright silver M1 chip with the apple logo, next to which is Apple's integrated memory chip.

Finally, ifixit says that integrated memory makes M1 MAC maintenance more difficult. It should be noted that the M1 MAC is not equipped with the T2 chip designed by apple, because the security function of T2 has been directly integrated into the M1 chip.

Related news
Apple's self-developed MAC chip M1 details: performance and energy efficiency doubled, far better than Intel processor
Apple M1 chip runs to crush Intel 10 core i9 organization: new MacBook to sell!
Detailed evaluation of Apple silicon M1 MacBook Air
M1 chip Macbook Pro experience: goodbye intel
PC will change! Is apple M1 killing arm the future?
Ifixit disassembles M1 macbook pro and air: internal design is the same as Intel
Ifixit disassembles Apple silicon MacBook to reveal M1 custom chip
Want to buy M1 chip MacBook? We need to figure out these three things
Take out the M1 core apple, this year may let Intel, amd laptop very uncomfortable
The document confirms that the power consumption of M1 MAC Mimi is only 1 / 3 of that of Intel chip version
Hot news this week
China has found 35 known cases of the new zoonotic virus Langya
Losses in a single quarter of $ 23.4 billion a record, SoftBank did not carry the plunge of technology stocks and the devaluation of the yen
The prevention and control of the American Monkey epidemic has failed. What should I pay attention to?
Is the micro -business headache? WeChat friends are suspected to have a big move: 7 can only be posted a week
Kuaishou launched a self-developed cloud intelligent video processing chip: The chip has been streamed successfully
The new product of Xiaomi MIX is coming: both internal and external dual -screen has been upgraded to make up for the previous generation.
A new zoonotic virus, Langya, found in China has not yet been confirmed to be transmitted from person to person
Ministry of Public Security: Single telecommunications network fraud continues to cause 40 % of all electrical fraud cases
Special price "kill ripe"? Bike-sharing platforms have different prices for the same package for different users
A tech company in Shanghai has been fined 220,000 yuan for swiping orders to improve its ranking on Yelp
The most popular news this week
Executives' stole 'chip technology to set up a company and sold it to employers for 1 billion yuan
The total sales volume of PS4 may set 117.2 million units currently ranking fourth in sales machine sales
MacOS Ventura feature page removes third-party app 'Hide My Email'
Yuyuki Kobayashi joins NetEase game! He worked on Devil May Cry 4 and Resident Evil 4.
Cyber violence governance needs the concerted efforts of all sectors of society
WeChat releases a new specification for the public account avatar setting, and the official news reminder is prohibited
After the U.S. chip bill takes effect, the manufacturer's snatching subsidy war is even more intense
Thousands of flights in the United States are delayed or canceled: User collapse extreme weather is frequent
Off the shelves one after another! The Sogou search App followed in the footsteps of Sogou Map
Xiaomi MIX flagship top with price reduction: consistent with the price of 12S Ultra