During the past few release cycles, the battle of reviews between Intel and AMD fans has been intense, with a lot of digital ink discussing which company has improved significantly or not over the years. There is also some comment on the original performance of the two companies' fastest processors.

We think it's interesting to delve into each company's fastest desktop / CPU's archive performance benchmark, so that we can have a good understanding of each company's actual performance over the years, and even see if there are any patterns to collect or make some bets on the future.

Let's start with some tables before we go into the chart

The calculation of enthusiasts in the past 20 years 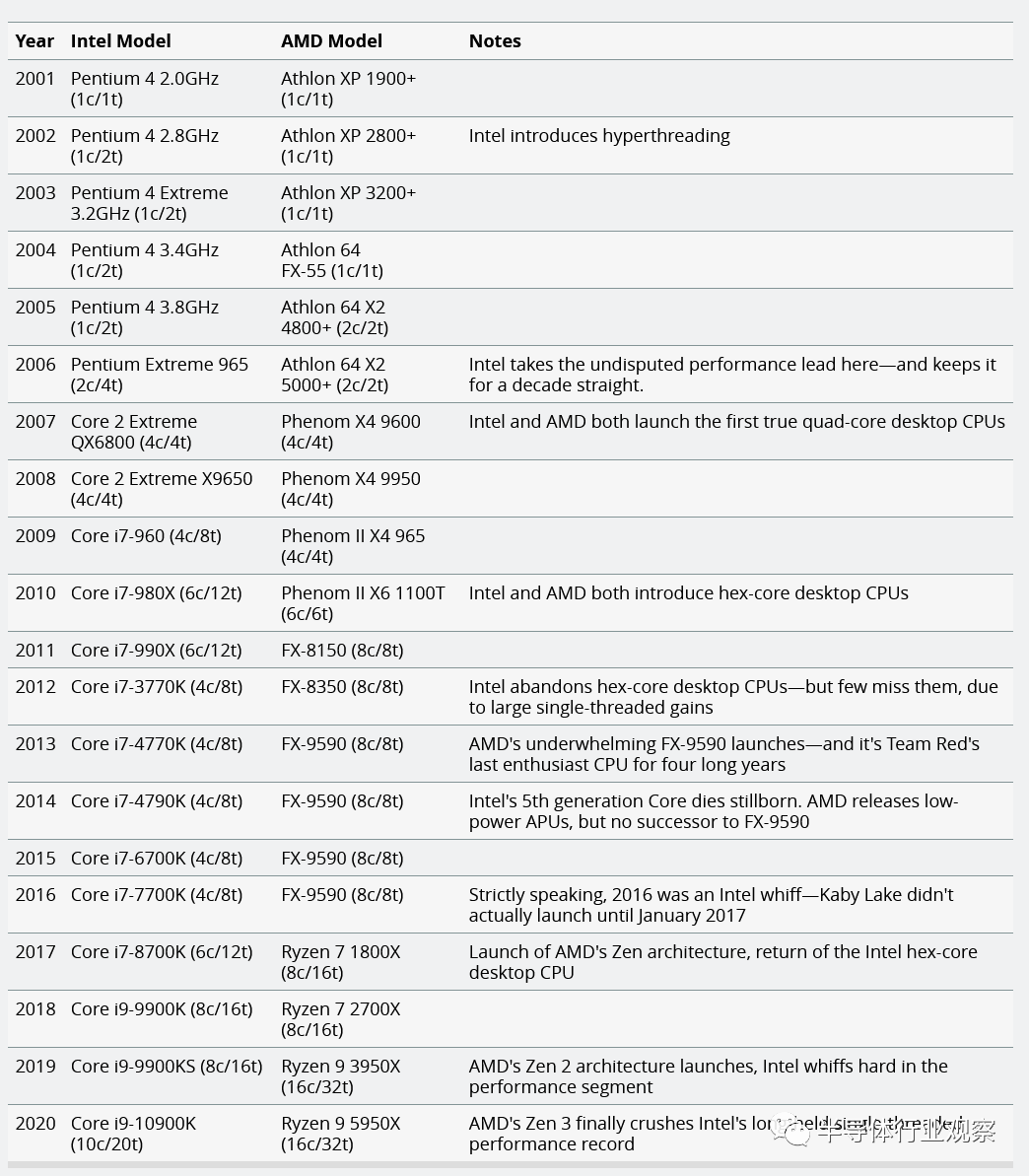 Although Intel and AMD launch a large number of processors each year for different prices and target markets, we are limited to the fastest desktops o

Even people like me who have been as a system builder throughout the period, assembling such lists is a huge pain, let alone matching test results. This is particularly difficult in AMD, as AMD do not really match Intel's Ark to provide a single list of processors, sorted by generation, type, and release date. If you think I chose the wrong one for the yea

We should address some of the anomalies in the chart

Intel also experienced several failures between 2013 and 2017, though not as serious or as long. The fifth generation core series basically died in 2014, although the fourth generation Core i7 series updates did provide significant performance improvements. Two years later, it was another trend technically - the Kaby lake with core i7-7700k didn't really start until January 2017. We made up a little bit to make Kaby lake into 2016, because otherwise it would disappear completely. Coffee lake and i7-8700k appeared later in the same year. 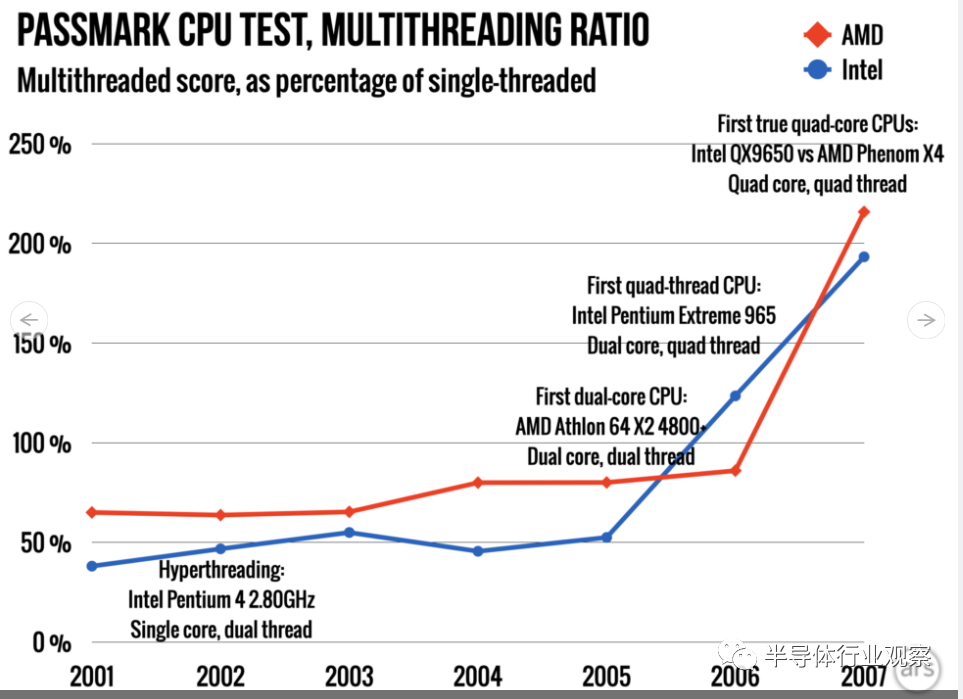 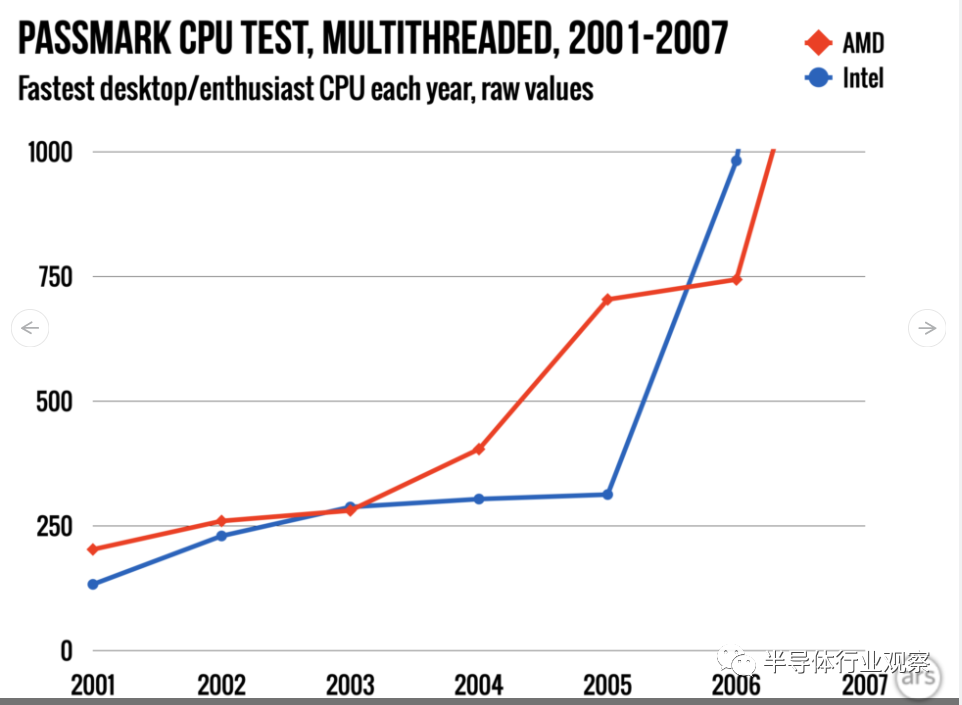 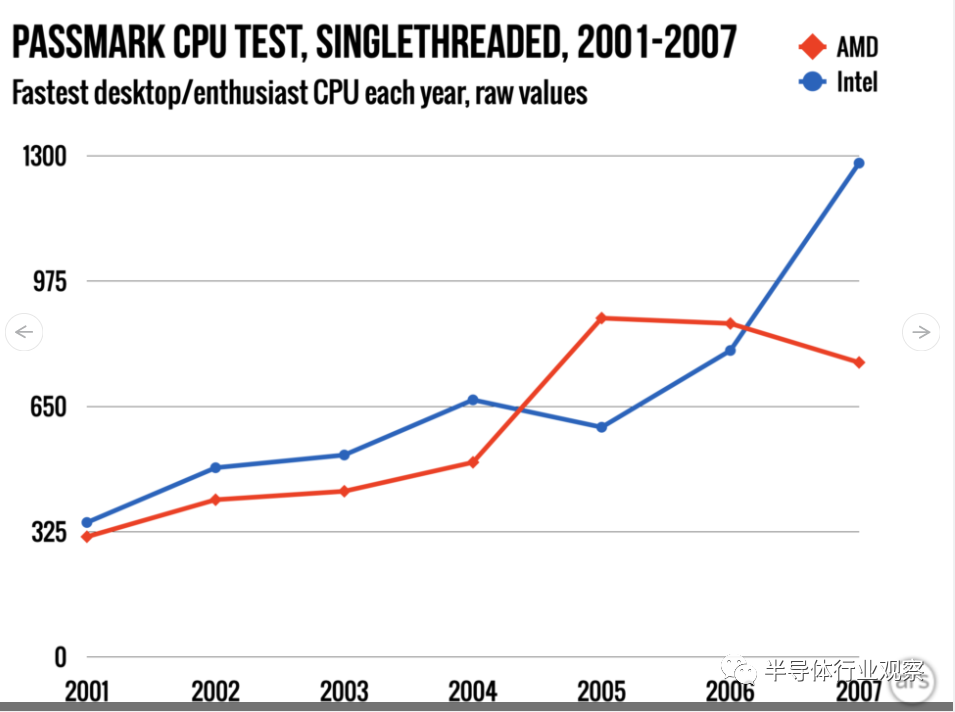 Even in the Athlon era, amd can't catch up with Intel in single thread performance. Its Athlon 64 x2 processor once led, but Intel regained the lead with the core 2 Extreme QX9650.

This is something many of us forgot in the early 21st century – multitasking is too bad. in the first chart above, we are studying the ratio between multithreading and single thread Passmark CPU benchmark scores. For the year 2001-2005, the CPU, single thread score is actually higher than multithreading, which means you can do more computing work on a single thread at a given time, rather than decomposing into parallel threads.

And you might think that's because they' re still single-core, single-threaded CPU, but you're wrong. Intel introduced 1 c/2t Pentium 4 in 2002 2.8 GHz hyperthreading, which has little impact on actual multithreading capabilities. AMD launched the first truly dual-core desktop CPU in 2005

Unfortunately for Intel, as early as 2001, the world had turned to multitasking operating systems, and multithreaded workloads emerged, as evidenced by the use of tabbed browsing in 2002 by Phoenix, the predecessor of Firefox. With CPU saturation, users are getting used to the environment of opening many programs all day. Multithreading performance (rather than single thread) becomes an urgent task. 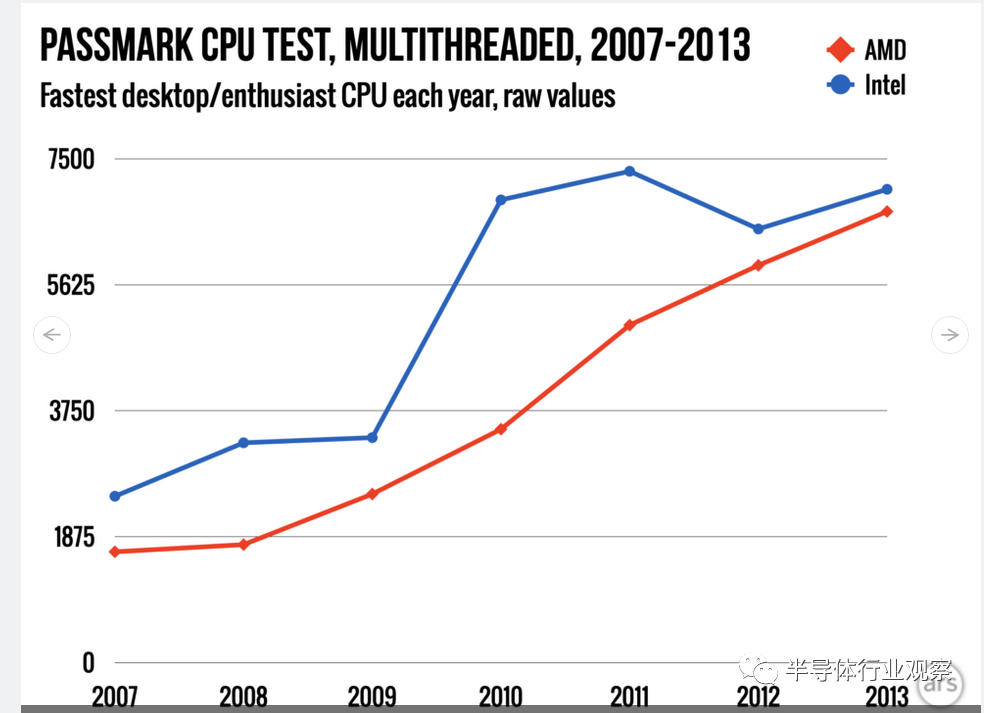 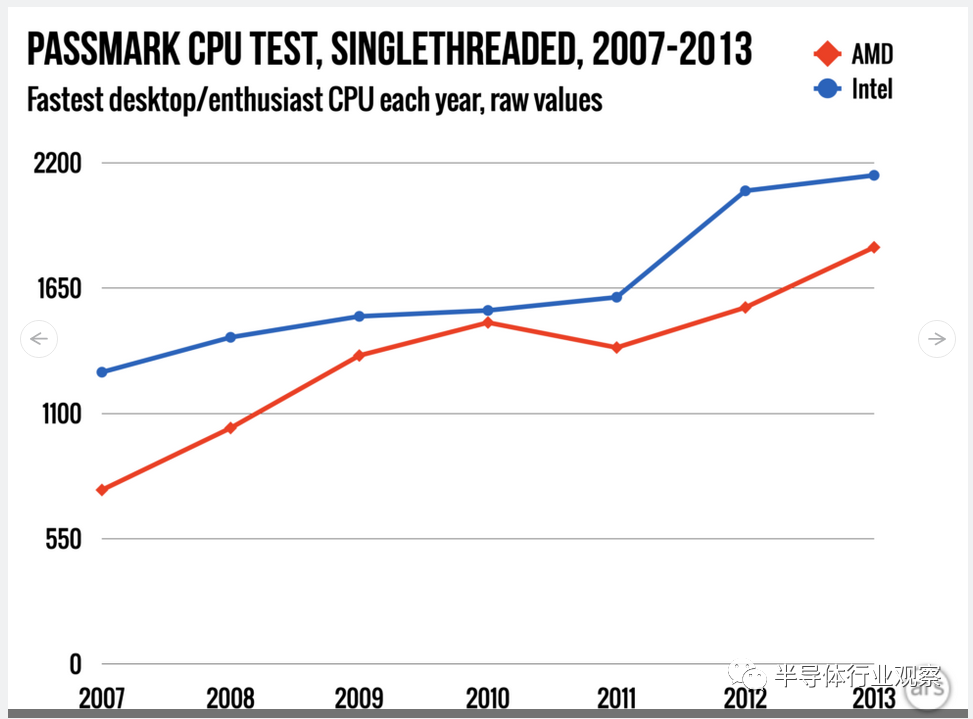 Intel has a single-threaded advantage over AMD throughout 2007-2013 and is usually quite a bit of an advantage.

2007-2013 was an exciting time to improve CPU performance and functionality, but it was quite boring in terms of the battle between Intel and AMD. Intel has been leading the way in terms of single threaded and multithreaded performance.

Both companies released their first six core CPU in 2010, but AMD's x61100t uses the same K10 architecture as the x4965 in 2009. Intel's i7-980x not only achieves chip reduction, but also adds a new set of AES instructions. This nearly tripled Intel's multithreading performance, while still maintaining a small single thread boot time.

In 2011, amd was fully engaged in multithreading with its ill fated eight core bulldozer architecture. While bulldozer does start to gain a significant position on Intel in the field of multithreading, it comes at a cost. The new fx-8150 actually regresses in single threaded performance.

AMD Bulldozer had become Piledriver, by 2012 and almost caught up in multithreading Intel, but only because Intel reduced its core number from 6 to 4 when reducing its process to 22 nm. AMD has it

To make matters worse in 2013, AMD launched the final PiledriverCPU (abominable FX-9590). While Intel's leading edge in engineering technology continues to improve, the CPU represents a Hail Mary way to stay competitive-it is mainly synchronized with Intel's i7-4770K, but only through clock frequencies and voltages, which usually remain

Compared with 125w of fx-8350 and 84w of i7-4770k, the rated TDP is 225W, and fx-9590 is almost unusable CPU. In typical cases, air cooling is not challenging, and the noise and waste heat of the fans are obnoxious, and even the hard core amd fans can't make excuses for them, especially when their competition is still easy to beat. 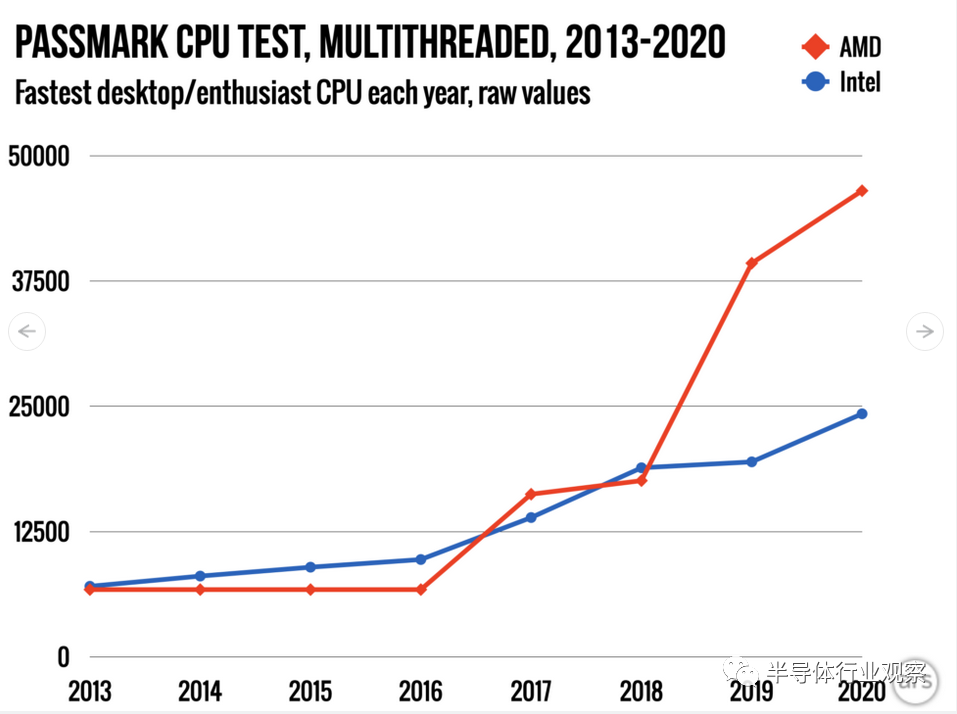 Related news
Intel finally admitted that it can't catch up with AMD in 2 years.
AMD is coming: Intel is expected to take price reduction measures
AMD, Intel dual voice: processor supply is still sufficient
AMD valuation is Intel? far higher Mother Su changed her life!
Yes! Intel and AMD processors are widely available
Intel and AMD's tortoise and rabbit race
Intel, amd motherboard model chaos: look at this picture can distinguish
Experts say: there will be a price war between AMD and Intel sooner or later
Intel is back! AMD is over
Hot news this week
Templates for creating new Twitter in the future? Musk's praise of WeChat has triggered a heated discussion on the whole network
Tencent Music's TME live will re-screen Jay Chou's concert on may 20 and 21
Sony's new LinkBuds S headset parameter exposure: only 4.8 grams of comprehensive battery life 20 hours
Weak demand in the mobile market! Domestic shipments of mobile phones fell 40.5% in March to a two-year low
Henan 4 village bank line cannot withdraw cash? CBRC responds! The public security organs have registered an investigation
Baidu: In 2021, an average of 56 billion malicious information of all kinds will be intercepted every year
"Chinese version of LV" is re -executed 680 million! Reporting the property clues of the chairman, up to 8.66 million yuan
Still did it! Canada has banned Huawei and ZTE from participating in the country's 5G network on "national security" grounds
Pig companies continue to increase technology, just launched the smart pig farm, another 100 million to set up a technology company
The Jingdong Express bulk order sent to Shanghai across the country is completely static? JD.com: Not true No such information has been published
The most popular news this week
The domestic screens are rolled to the 2K screen. Why don't Apple follow the roll?
Meizu 19 series coming? Meizu mobile phone appearance patent disclosure: the return of secondary screen
Jingdong crowdfunding 10000mAh mobile power supply: with Apple Lightning and Type-c dual wires
Mobile phone chip CPU energy efficiency ranking: it is comparable to A14
What can we learn about m& # 111nkeypox cases in many countries around the world?
Alibaba Daniel Zhang connects 300 platform merchants: do more practical things for merchants
At the age of 58, he was elected as the chairman of Everbright Bank! Former President of Bank of China and Construction Bank
Buy An Audi or a Tesla? Audi's new electric vehicles are on sale: from 300,000
The first domestic Tianji 1300 mobile phone did not fire first! More than 260,000 people made reservations
The Chinese team officially made up for the bronze medal in the Tokyo Olympic relay! Su Bingtian responded excitedly