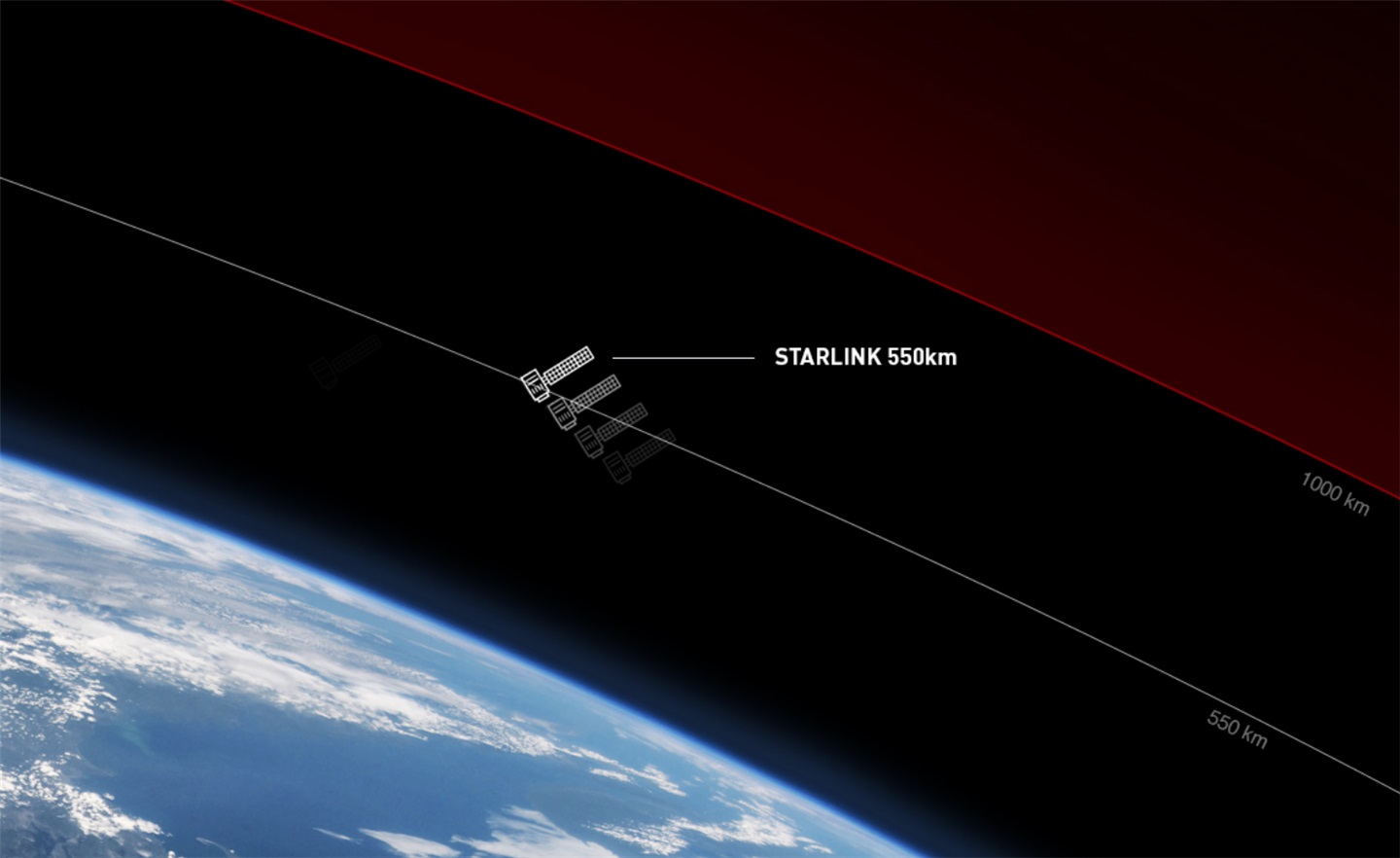 earlier this year, SpaceX submitted an application for revision to the FCC, asking federal agencies to allow Starlink to change a range of satellite parameters. The application stalled after amazon's Kuiper systems company raised concerns with FCC, with regulators arguing that the changes required by the SpaceX would cause future orbits of Starlink satellites to overlap with their own satellites, which operate at highly similar speeds.

Specifically, SpaceX originally proposed to reduce the operating altitude of future Starlink satellite groups from the previous 1110-1325 km (i.e. its range) to 540-570 km. The company believes that the deployment of satellites at this relatively low altitude will help reduce broadband signal delays and make it easier for any future space debris to derail into the Earth's atmosphere.

The problem is, it's too close to where Kuiper wants to deploy satellites. Kuiper's minimum orbital altitude is 590 km and the maximum allowable range is 9 km. The upper end of SpaceX modified track shell is 570 km, with a tolerance of 30 km. This means that when Kuiper constellation is fully deployed (590 km cluster is the last group Kuiper will deploy), Starlink and Kuiper satellites will probably share an orbit altitude of 20 km.

SpaceX made major concessions this week. On Tuesday SpaceX the head of satellite policy David Goldman wrote a letter to the FCC, the company agreed to limit the operating altitude of all Starlink satellites to no more than 580 kilometers after the launch, one kilometer lower than the minimum height range of the Kuiper. 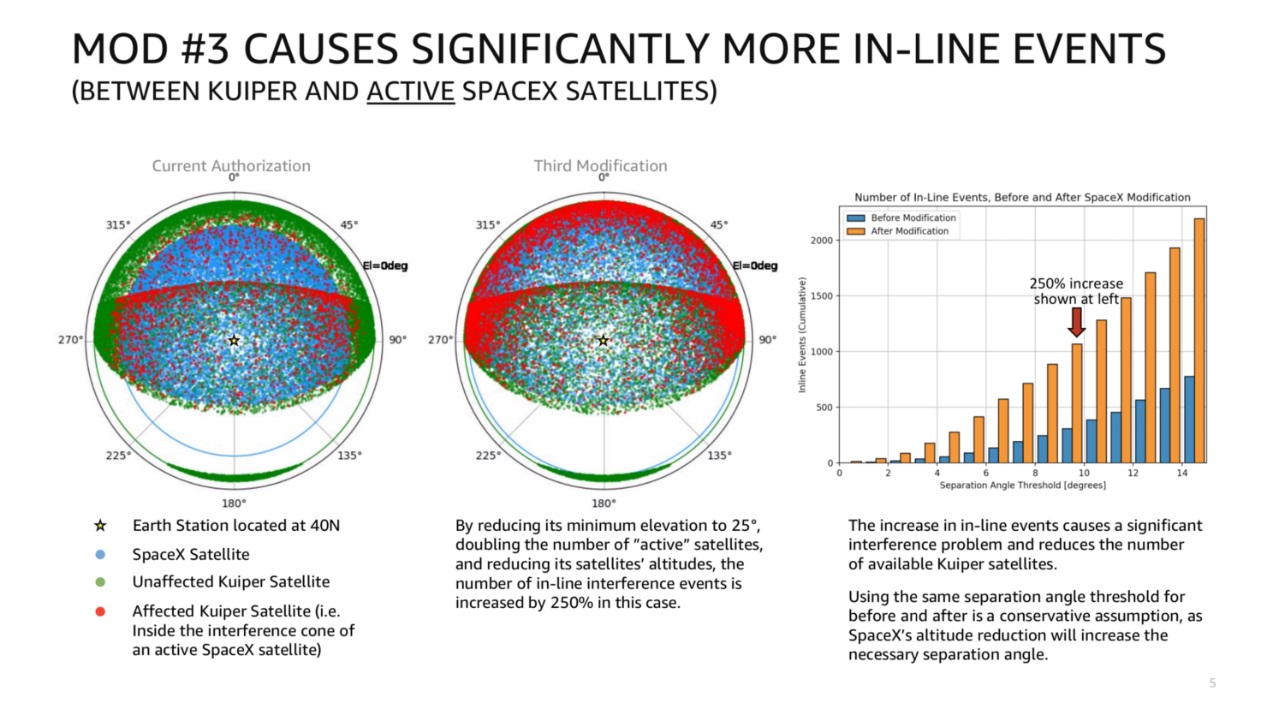 SpaceX urged FCC to authorize the deployment of 58 Starlink satellites above the Arctic Circle, as recommended in the original application, as the company did not want to miss the launch window for December.

SpaceX stressed that the deployment of this polar constellation was a critical step in testing Starlink services in the most remote parts of the world, including Alaska. The company added that bringing coverage through polar orbits would contribute to national security and could be used to support key government tasks in remote areas.

Kuiper have other concerns about SpaceX plans. the SpaceX also recommends that the minimum elevation angle of the Starlink ground station be reduced from 40° to 25° in the modification request to compensate for the reduced satellite coverage due to altitude changes (lower satellites cover less ground when broadcasting signals).

The higher the elevation angle between the two constellations will increase by 250%. Kuiper, however, will need some time to validate these estimates, as it has not deployed any satellites.

Amazon's subsidiary plans to eventually launch 3200 satellites to form a constellation. and the company received FCC deployment authorization in july.

Related news
SpaceX started building Starlink Internet Satellite Constellation
SpaceX plans to provide Internet coverage through Starlink constellation by mid-2020
SpaceX has again successfully launched more than 60 satellites for its Starlink satellite internet constellation
SpaceX have put more than 350 Starlink Internet satellites in orbit
SpaceX concessions to Amazon to reduce Starlink height to avoid overlap with Amazon's satellites
SpaceX makes concession to Kuiper, an Amazon satellite company, to reduce the orbit altitude of Starlink constellation
Musk fired at Amazon, saying it was trying to block Starlink
SpaceX accused Amazon of trying to slow down the deployment of Starlink
800 billion! Musk is taking Starlink to an IPO
SpaceX: Working with the astronomy community to reduce Starlink satellite brightness
Hot news this week
With the NIL technology, Canon wants to provide China with a lithography machine comparable to the EUV
Genius hacker Geohot promised Musk 12 weeks to fix Twitter search, but posted for help because he wouldn't react
Google's parent company is planning to cut tens of thousands of jobs
The Long March 9 is basically confirmed: the low-orbit carrying capacity of 150 tons can carry the entire space station into space
A small plane in the US has crashed into a 30-metre high voltage power line and got stuck: 80,000 people affected
Can recording others' wechat chat records be used as evidence? The Beijing Internet Court has an answer
Alibaba launched a new cross-border e-commerce platform in Spain, aiming to operate independently in the middle and high-end market
Google is concerned that Microsoft's acquisition of Activision Blizzard will affect the ChromeOS experience
The second generation Snapdragon 8 flagship! Mi 13 toughened film appeared: four sides and other narrow screen accounted for a stable ratio
A Tesla crashed into two cars in Taizhou, Zhejiang province, killing two and injuring one, police said
The most popular news this week
QQ membership via SMS has become a thing of the past: Tencent officials said the relevant business functions have been offline
Two men ransacked an Apple store and made off with more than 200,000 products: a textbook move by the employees
South Korea 2-1 Portugal repeat Asian miracle: Lei Jun with Xiaomi 13 thumbs up
The standard version is unbeatable and sells for 3,999 yuan for Mi fans
Two new Huawei devices are ready to launch: one is more creative
For the first time ever! NVIDIA graphics card to play the game flash screen must refresh the BIOS
Samsung Galaxy Z Flip5 exposure: Larger screen, fewer creases
What is this picture? Intel next generation Fever U also has 6 cores!
1W less than 40 cents 550W gold medal full module power 199 yuan RTX 3060 are enough
Viral 'Coronavirus Medicine Sequence' : Reliable? Experts guide the way