The most powerful game console in the history of Microsoft! Xbox series X

Xbox Series X belong to the fourth generation of Xbox series of game consoles. Compared with the CPU and GPU of the previous generation, they provide four times and two times performance respectively, and for the first time in the Xbox series, they are equipped with a solid-state hard disk. Microsoft has so far released the most powerful game console.

We fast technology has already got this new product. Here's a picture for you.

From a distance, Xbox Series X is a black cuboidIts three dimensions are 30x15x15cm, which can be placed vertically or horizontally.

Xbox Series XWith AMD's latest Zen 2 and rDNA 2 architectures, the new system on chip (SOC) is designed for speed and performance improvementIt's compatible with all four generations, 12 generations, and has the ability to play all kinds of games together.

Heat dissipation is also a strong point of the game machine. The top honeycomb coal hole is matched with three air flow channels to evenly disperse the heat generated by the internal componentsKeep the host cool and silent.

At the same time, the innovative split motherboard is used on the host for the first time, which can control the internal temperature of the Xbox Series X evenly, so that the host can output more performance.

Xbox X handle button layout is basically the same as before, the surface of the trigger has texture. Rubber material on the back of the handle effectively increases grip and comfort. 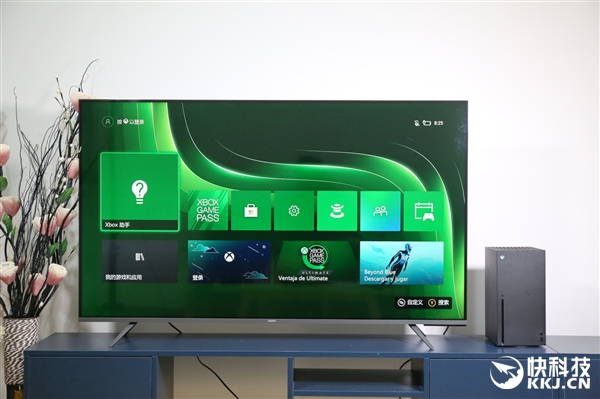