Linus Torvalds, who used to swear at NVIDIA because of closed source drivers, has just announced an important change in the Linux 5.11 kernel version.According to the plan, the Linux 5.11 stable kernel will arrive in February 2021, and the development team usually does not inject new functional code after the end of the merge window.However, before this weekend's Linux 5.11-rc4 release candidate, Linus Torvalds is pleased to announce that it will add driver support for NVIDIA RTX 30 series ampere GPU for Linux 5.11 kernel. 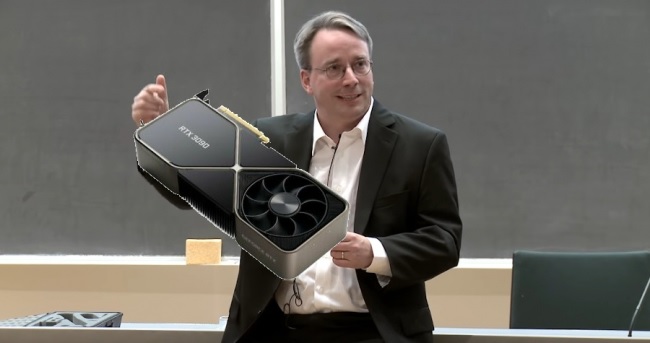 The initial code for ampere mode setup will be incorporated into Linux 5.11 (Figure via)Phoronix）

Linus Torvalds said he was happy to allow new hardware support to be added to Linux 5.11. As a rare code addition after the merge window, this part of the content is completely independent, and will not affect and risk the existing Nouveau driver support.

However, as outlined in yesterday's article, the original 3000 series open source hardware support was limited to kernel mode settings and lacked any hardware acceleration. In addition, the initialization of GPU engines depends on NVIDIA's signed blob firmware that has not yet been released.

In terms of known problems, users still need to pay attention to bugs in frequency recovery / performance, which means that all NVIDIA GPUs except GTX 950 series are still facing big obstacles.

For the upcoming Linux 5.11 kernel, Nouveau open source driver should be in a relatively good state, at least to ensure that users can use RTX 30 series GPU smoothly.

After that, users can download the dedicated NVIDIA kernel graphics driver software to enjoy the complete function and harvest high-performance experience.

Before getting rid of 3D acceleration and other limitations (including the lack of open source Vulkan drivers), the only reasonable solution to use RTX 30 series GPU is to use NVIDIA's high-quality, cross platform, but proprietary closed source drivers.